How far was Mary and Joseph’s trip to Bethlehem?

During these final days of Advent, our thoughts turn to a humble couple, weary from their long journey.

Mary and Joseph were tired. They had just traveled between 70 and 90 miles, depending on the route they took.

This is a long way for anyone, let alone a woman nine months pregnant. Some say she would have walked rather than ridden a donkey, as is often depicted. Either way, it would have been an intensely wearying trip!

In addition to this, consider the time of year. It was winter, and the weather was cold and harsh. When Mary and Joseph at last arrived at their destination, no comfort awaited them. The inn was full and they had to take refuge in a stable.

Of course, this was not simply bad luck. Our Lord chose these conditions.

The words of the well-known hymn, O Little Town of Bethlehem, come to mind when we think of this sleeping Child, unknown but to a few, quiet and humble, God Himself among men, silent and small…

“…in thy dark streets shineth the Everlasting Light…
the hopes and fears of all the years
are met in thee tonight.”

Truly, all the hopes and longing of God’s people—chronicled throughout the Scriptures that had foretold His coming for so long—have come to rest tonight in this humble Child.

Christmas is nearly here, but if you still need a meaningful gift for someone special in your life, it’s not too late. A digital gift card from The Catholic Company requires no shipping—it arrives in the recipient’s inbox right away via email and can be purchased in any dollar amount. Available now at The Catholic Company!

At Get Fed, we pray that the Christ Child may bless you abundantly on Christmas Day and always. We’ll be back in action on Monday—till then, Merry Christmas to all, and to all a good night! 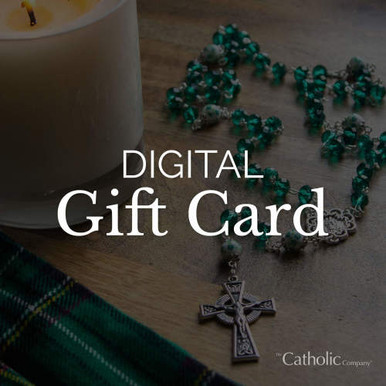 Adoration of the Magi by di Bondone Tile