My Lent is generally one of serene, recollected repentance. I aspire to make very specific changes to my schedule, my prayer life, and my habits. It is typically a spiritually-fruitful and intense time, depending on the level of recollection, focus, and devotion that I give it.

And yet—no matter how great my efforts are—Lent never seems to be as fruitful as it should have been, or could have been. I was meditating on this recently, and a thought came to me like a thump on the head:

I should enter into Lent in the same way that I enter any spiritual battle.

But here’s what I was missing in my Lenten observance:

I needed to act with the heart and mind of a warrior in this penitential season, just as in the rest of the spiritual life.

Since that realization, I have been striving to bring the heart of a warrior into my Lent. Sacred Scripture is replete with battle imagery, and we all know that living the Christian faith is its own battle in this time of secularism, relativism, and all the other “isms” that bring the world into chaos.

Prayer, recollection, repentance, and discipline are all very important, but how much more powerful they become for the entire Kingdom of God when we do them with the heart and mind of a warrior.

So here I am now, waving the banner: “Onward, Christian soldier! Into battle for Christ the King!”

Lenten Reflection: Our Battle Against Powers and Principalities

Lent is not entirely personal, nor is it communal only for those of us on earth; it’s more epic than that. It involves both the earthly and heavenly realms. It consists in the goal to slay all sin and make reparation for all sin. Not just our own evil, and that of our brothers and sisters in Christ, but collective evil, present throughout all time.

Christ the King is our Ruler, and we are His subjects in a fallen world. We aspire to His Kingdom while living in another. Yet even here, we claim His protection and governance over our lives, and over the community of this world in which we want Him to reign.

In order to do proper battle for Him and His Kingdom as we await the heavenly realm, we should aspire to have the heart of a warrior for the discipline of Lent. 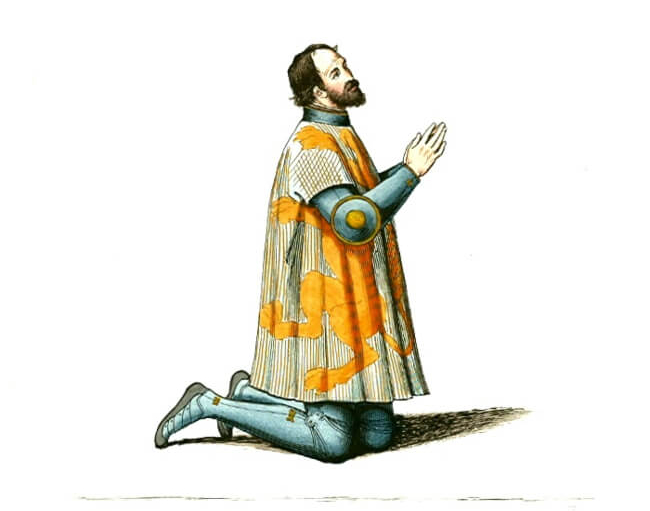 How powerfully we can advance the entire Kingdom with our sacrifices and our prayers if we approach Lent this way—with the understanding that this is not just about “my sins” or the sins of this world here and now, but the sins of all men for all time.

If that does not stir the Christian heart into battle mode, I don’t know what will.

Reflections on Being A Spiritual Warrior, with Reflection Questions

1. Every kingdom must be strong.

A kingdom must protect itself. It must be constantly aware of its territory, protecting its own, lest it fall into peril and be conquered. How does it do that? It trains warriors for battle physically, mentally, emotionally, and spiritually. It asks for their complete allegiance. Only in this way can it show absolute power and authority, so that it is not dominated and dissolved.

I love Psalm 144. It is an incredible battle cry! It almost sounds ferocious. Every time I recite it I feel like a warrior for Christ.

I came into the kitchen one Saturday and my teenager was just waking up, shuffling in for breakfast. My husband was pouring a cup of coffee and waiting on his toast.

With my arms raised in victory, I exclaimed loudly, and with great enthusiasm, “Blessed be the Lord, my rock, who trains my arms for battle and my fingers for war. He is my safeguard and my fortress, my stronghold and my deliverer. My shield in whom I take refuge. He subdues people under my rule!”

My teenager’s response was, “Uh…...THAT was intense!”

My twelve-year-old muttered from the next room, “Uh-oh….”

We all laughed, and I explained how I was bringing my inner warrior into Lent and that this was a favorite psalm of mine.

Why is all-out spiritual war so foreign to the spirit of our age? Because Satan has usurped authority for his own designs. We should be in constant battle mode, doing what we can to win it back.

Ask yourself: each day of Lent, am I striving to be in spiritual battle mode?

2. A kingdom cannot neglect its battles.

I will stir up Egypt against Egypt, brother against brother, neighbor against neighbor, city against city, kingdom against kingdom.
—Isaiah 19:2

We are meant to do battle in order to win for the Kingdom, stabilize the Kingdom, and ensure our eternal destiny. Any kingdom that neglects its battles will be dissolved and overtaken.

For our struggle is not with flesh and blood but with the principalities, with the powers, with the world rulers of this present darkness, with the evil spirits in the heavens.
—Ephesians 6:12

Therefore, put on the armor of God, that you may be able to resist on the evil day and, having done everything, to hold your ground.
—Ephesians 6:13

An army would never choose to go into war unprepared. We shouldn’t, either. The discipline of Lent is a way to build spiritual muscle. We prepare to face the spiritual obstacles of the enemy through prayer, fasting, almsgiving, and the sacraments. Recollecting ourselves, repenting of our own sins and the sins of the world, and making reparation are also means of strengthening ourselves as warriors so that we can advance the Kingdom of God.

Ask yourself: am I putting on my spiritual armor through uncompromising pursuit of holiness for myself and the entire Kingdom? If not, what is stopping me? What can I do about it?

4. Warriors must believe in a mission in order to claim victory.

No, in all these things, we are more than conquerors through Him who loved us.
—Romans 8:37

We must believe in the Kingdom of God and His promises. The weapons with which we fight are not just the weapons of the flesh or the world. They are more complex than that. They are spiritual. They have the power to demolish strongholds and prevail over evil. We know that we can do all things through the power of Christ and His victory on the Cross. We need only persevere with His strength dwelling in us, and His grace given to us. 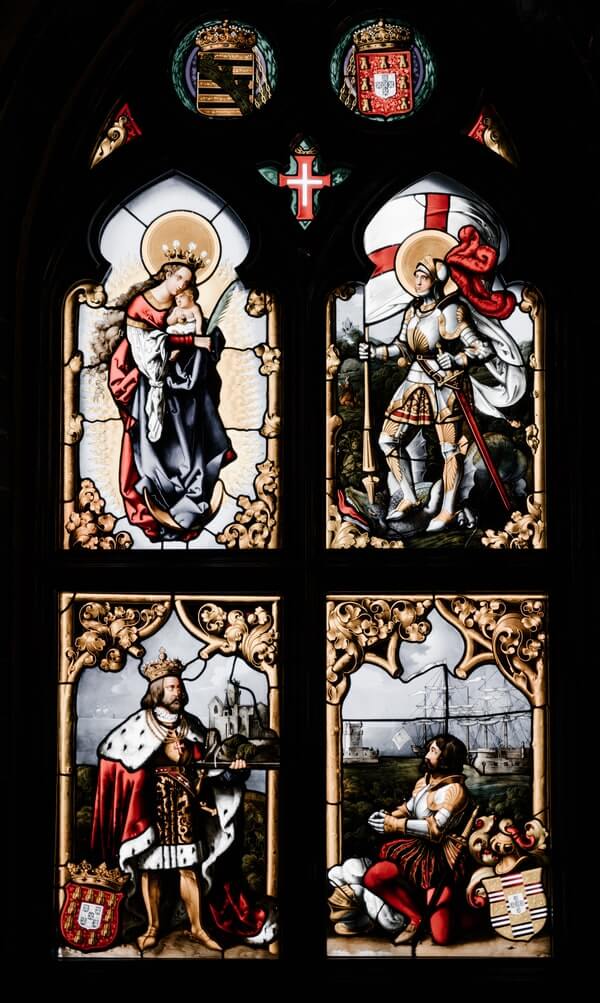 Ask yourself: do I believe and act as though I am a conqueror, through Christ’s love, grace and strength? Am I invigorated by my faith in God and His Kingdom?

Together they will be like warriors, trampling the mud of the streets in battle. They will wage war because the Lord is with them and will put the horsemen to shame.
—Zechariah 10:5

No king begins his rule with the intention of being conquered and assimilated into another kingdom. He believes in his divine decree and in a great destiny for his people.

Ask yourself: do I recognize that my own destiny is eternally linked to all of my brothers and sisters in Christ? Are there others in my life who are not serving the same King, and who may be causing me to lapse in my own loyalty to Christ the King? How can I manage those relationships for the good of the Kingdom of God and my own soul?

Thankfully, we are not alone in this daily spiritual battle. We serve a tremendous God, and we have the treasure of the Heavenly Hosts: Holy Mother Church, and the Body of Christ on earth. We have the prayers of the Holy Souls in Purgatory. We have the sacraments, and powerful prayers such as the Rosary, to obtain the graces we need for victory. 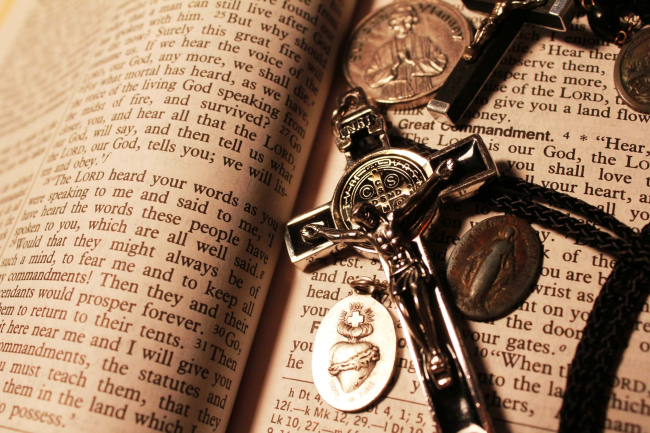 These are spiritual weapons in our arsenal. We are working on behalf of our King to make reparation for all sin throughout all time, not just to root out our own personal sins. This is a big mission, but with the heart and mind of a warrior—and Christ the King to sustain us—we will prevail.

In this season, let us have hearts of true warriors, united in our cause to make reparation for sin as we advance the rightful Kingdom of God.

Have you ever considered yourself to be a warrior for Christ? Why or why not?

How will you practice having the heart of a warrior in this day and age? 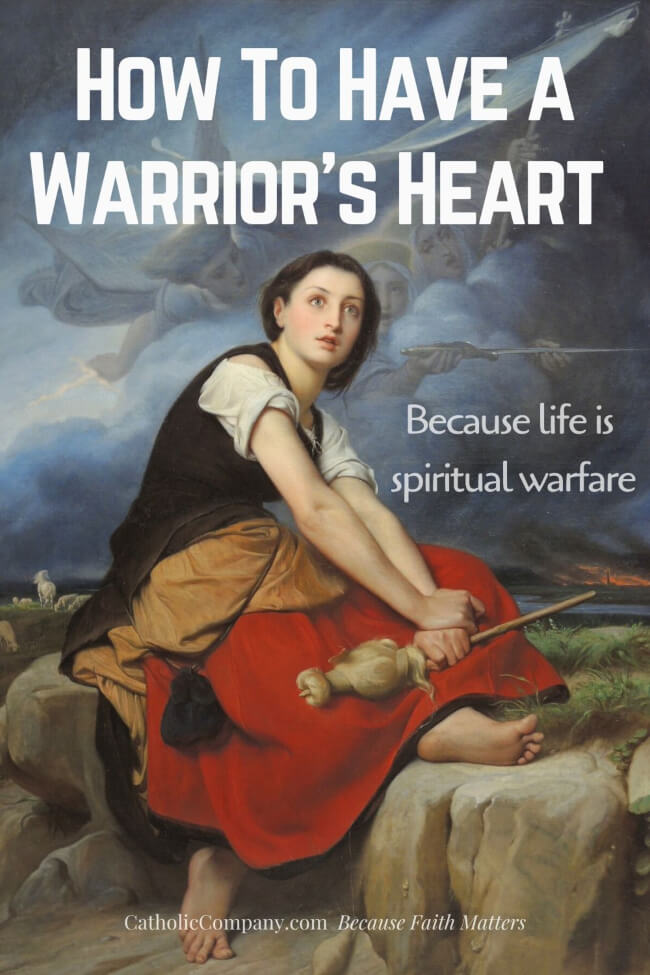