Most of us know that the sign of the cross invokes the Holy Trinity - the Father, the Son, and the Holy Spirit. We know that it traces the cross - an important symbol of Christianity - from the head to the heart and to the shoulders. And of course we know that it is a "Catholic thing". But there is a lot more to know about this traditional gesture that brings to mind Our Crucified Lord.

A sacramental is a sacred sign instituted by the Church which prepares a person to receive grace and which sanctifies a moment or circumstance. The gesture of making the Sign of the Cross with our fingers has been used since the earliest times of the Church to begin and to conclude prayer and the Mass, and it is helpful to remember that this ancient practice is a sacramental so that we never take it for granted and are always reverent when using it.

While they are similar in name, sacraments and sacramentals are distinct from one another in the life of the Catholic Church. Sacraments are outward signs instituted by Christ to give grace to those who receive them in a worthy manner.

Sacramentals, on the other hand, “are sacred signs which bear a resemblance to the sacraments. They signify effects, particularly of a spiritual nature, which are obtained through the intercession of the Church. By them, men are disposed to receive the chief effect of the sacraments, and various occasions in life are rendered holy” (Catechism of the Catholic Church, No. 1667).  Other items that can also be sacramentals are crucifixes, rosaries, scapulars, religious pictures, Holy medals, and Holy Water.

In our Good Catholic series, Spiritual Warfare, Father Pawlikowski warns us to never be hasty and always use reverence when making the Sign of the Cross. He explained that there is a danger when we do things that are either ritual or rote (actions or words that are repeated) because these are things we do so often that we sometimes don't think about them. And that is the danger, isn't it? - that we do not think about them.  Yet it is because we do it so often that we should try our best to make this holy gesture reverent. Father Pawlikowski even recommends that we make the sign in a large manner, and slowly, so that we are more aware of what it is we are doing and also for the benefit of those around us that we might give evidence of our faith.

3. The Sign of the Cross can be made by parents over their children.

Priests who are in holy orders bless others by making the sign of the cross in the air toward the persons or things to be blessed, but lay people can bless their children by using their finger, usually the thumb. This “lay blessing” is common in Catholic cultures, made by parents on their children before bed or before going out or on a trip. I remember once at a retreat an older priest telling the participants that his mother told him when he was very young that the Sign of the Cross was a blessing and that in itself it was a prayer. When he was just a child she would mark his head with the Sign of the Cross before bed. Even when he got older he always blessed himself with the sign of the cross before falling asleep at night. He said that although he was often exhausted during his first assignment as a priest and sometimes would literally "fall into bed at night" he would never forget to trace the Sign of the Cross with his thumb as he drifted to sleep. What a beautiful image!

4. The Sign of the Cross was solidified by the early Church who utilized this sign to fight heresy, demons, and human apathy.

It seems clear from circumstances and from early Church fathers that the holy gesture of making the Sign of the Cross had its roots as a prayer in apostolic times. For instance, Tertullian, who lived from 160-240 AD, said the following about the Sign of the Cross: "At every forward step and movement, at every going in and out, when we put on our our clothes and shoes, when we bathe, when we sit at table, when we light the lamps, on seat, in all the ordinary actions of daily life, we trace upon the forehead the sign." And St. Basil (ca. 329–79) said that the apostles “taught us to mark with the Sign of the Cross those who put their hope in the Lord,” that is, those who presented themselves for baptism.

St. Athanasius, who died in 373 A.D. said, "For this is what the Gentiles traduce and scoff at, and laugh loudly at us, insisting on the one fact of the Cross of Christ; and it is just here that one must pity their want of sense, because when they traduce the Cross of Christ they do not see that its power has filled all the world, and that by it the effects of the knowledge of God are made manifest to all."

The following are words from St. Cyril of Jerusalem who died around 386 A.D.: "Let us not be ashamed to confess the Crucified. Be the cross our seal, made with boldness by our fingers and on our brow and in everything: over the bread we eat, and the cups we drink; in our goings out and our comings in; before our sleep, when we lie down and when we awake; when we are travelling, and when we are at rest. Make it on your forehead so that the devils, at sight of the standard of the King, may flee away trembling''.

In the 5th and 6th centuries, a heresy or false teaching, called the Monophysite Heresy, spread which taught that Christ had only one nature. The Christians, who believed what the Apostles had taught, wanted to emphasize that Christ had two natures -- His divine nature and His human nature. Therefore people made a large cross with two fingers (signifying the two natures of Christ). Still today when the Pope gives his blessing in places like St. Peter's in Rome, he has his two fingers extended.

We know that many of the saints used the Sign of the Cross to combat demonic spirits. For instance, St. Anthony gave this advice: “The demons make their seeming onslaughts against those who are cowardly. Sign yourselves therefore with the cross, and depart boldly, and let these make sport for themselves.” We often think of the sign of the cross only as a habitual action used to begin prayer, but it is rather a powerful defense that fortifies a Christian to resist the temptations of evil spirits. In our recent Good Catholic series Spiritual Warfare, Father Pawlikowski explains how we should make the Sign of the Cross as frequently "as we are tempted and recall the price which Christ paid to redeem us." 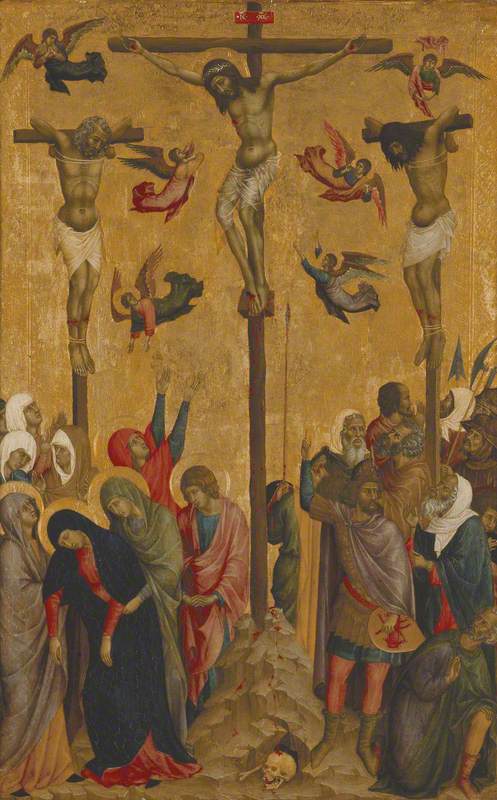 6. The Sign of the Cross is different in the Eastern and Western Churches.

In the 13th century, Pope Innocent III decreed that the Sign of the Cross should be made with three fingers from the forehead to the chest, and from the right to the left shoulder. At a later date, the whole hand was used, and the direction changed from the left to the right shoulder. Most Catholics in the Western Church join their five fingers and touch their forehead, chest, left shoulder, and right shoulder.

The Sign of the Cross in the Eastern Church is made from the forehead, to the chest, to the right, and then to the left shoulder. The three fingers represent the Father, Son, and Holy Spirit, and are the ones used to make the Sign of the Cross. They curl their ring and little finger into their hand, as if making a fist. Those fingers symbolize the dual nature of Jesus: his Divinity and humanity. If you have ever been to the Divine Liturgy of the Byzantine Rite you know that the Sign of the Cross is used often through the liturgical celebration, much more so than it is used in the Latin Rite.