*Must type in code at checkout to receive 17% off orders over $50. Free standard shipping (Contiguous U.S. only) will be automatically applied at checkout for subtotals of $75 or more after discount has been applied. Cannot be used with other coupon codes or on orders already placed. Excludes gift cards and Good Catholic digital subscriptions. Other restrictions may apply. Expires 11:59 p.m. PST on 06/22/21. Due to COVID19 there may be delays with some mail carriers. Please see shipping page for more information.

With code: HAPPY4TH *Must type in code at checkout to receive free SKU 9990783 on order subtotal of $35 or more. Free standard shipping (Contiguous U.S. only) will be automatically applied at checkout for subtotals of $75 or more after discount has been applied. Cannot be used with other coupon codes or on orders already placed. Excludes gift cards and Good Catholic digital subscriptions. Other restrictions may apply. Expires 11:59 p.m. PST on 07/04/21. Due to COVID19 there may be delays with some mail carriers. Please see shipping page for more information. Only while supplies last.

What a joyful and grace-filled day!

Here are the highlights from Pope Francis' first full day on his apostolic journey to the United States. All images taken from live streaming at the USCCB website and the lovely canonization website for St. Junipero Serra.

This is Pope Francis' very first time stepping foot in the United States, and the first canonization Mass on American soil.  This was truly a historic and very special day for both the Catholic Church and the United States!

The morning began with Pope Francis receiving an amazing welcome at the White House.  Look at this stunning photo with the U.S.A. flags and Vatican flags flying side-by-side, the soldiers, the fan-fare . . . just a lovely, full-blown reception featuring America in all its diplomatic finery. 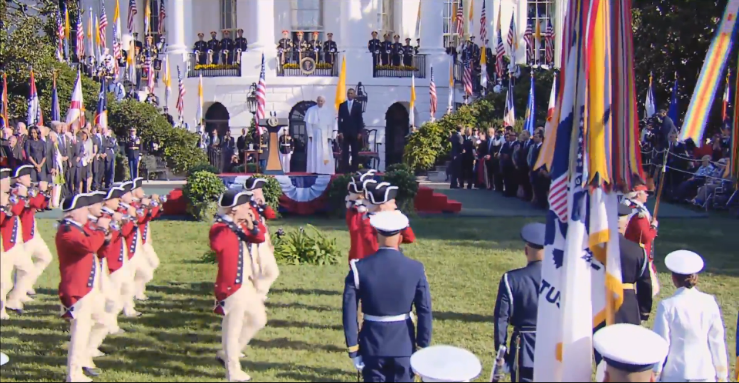 Read the full message of Pope Francis on the White House lawn. 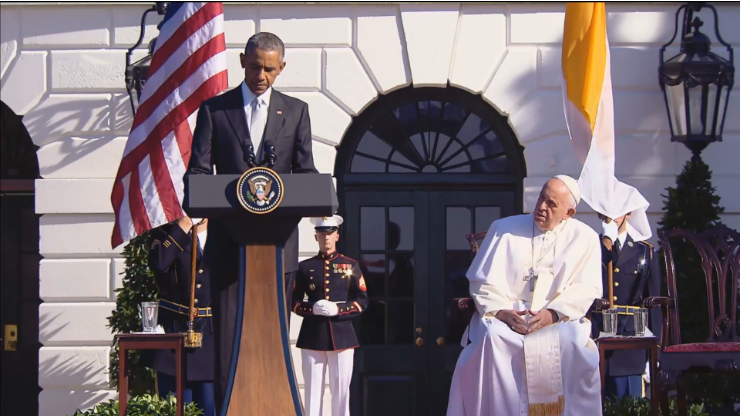 After the speeches, the Holy Father went inside the White House for a private greeting, emerging a few moments later from a balcony window with Mr. and Mrs. Obama. 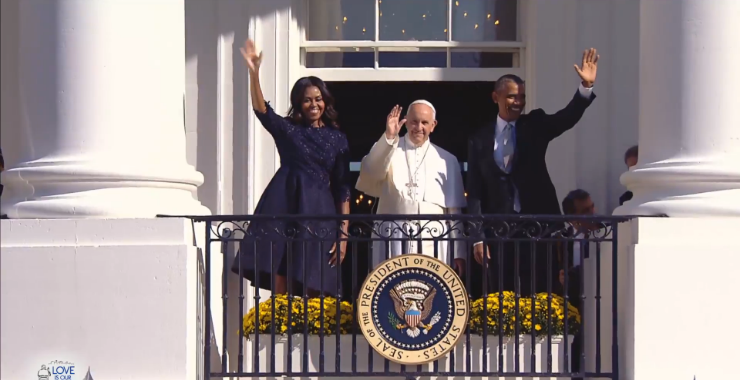 Thousands of people lined the streets and made just a joyful noise clamoring for the attention of Pope Francis as he went along in the famous Popemobile making his way from the White House to St. Matthew's Cathedral. 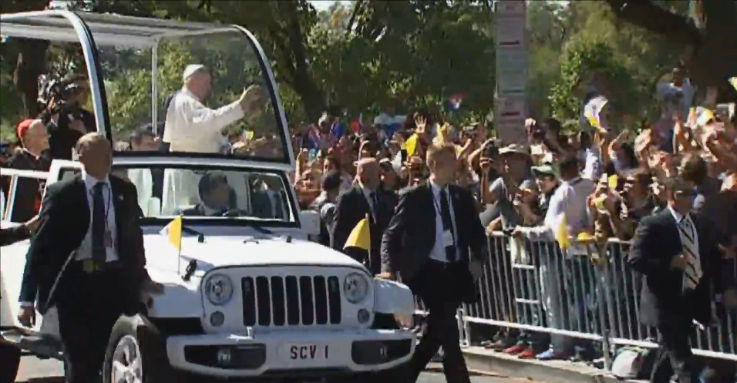 The U.S. Bishops came together to pray Midday Prayer with Pope Francis at the historic St. Matthew's Cathedral. This church is located in the district of D.C. known as "Little Rome" for its historic Catholic churches and seminaries.

Watching the live streaming from the USCCB, they noted that Pope Francis has a special connection to St. Matthew. It was on this saint's feast day that he received "the call" to the priesthood.

Pope Francis also took the motto for his pontificate from Jesus' call to St. Matthew. As reported in The Catholic World Report:

Francis’ papal motto, displayed with the coat of arms, is also the same as the one he used as a bishop; it is “miserando atque eligendo,” which in Latin means “by having mercy, by choosing him.” It is taken from a homily of the Venerable Bede on the call of St. Matthew: “Jesus saw the tax collector and by having mercy chose him as an Apostle saying to him: Follow me.” Vatican Radio explains the significance of this passage to the Holy Father:

This homily, which focuses on divine mercy and is reproduced in the Liturgy of the Hours on the Feast of Saint Matthew, has taken on special significance in the Pope's life and spiritual journey.

In fact it was on the Feast of Saint Matthew in 1953 that a young, seventeen-year-old Jorge Bergoglio was touched by the mercy of God and felt the call to religious life in the footsteps of Saint Ignatius of Loyola. 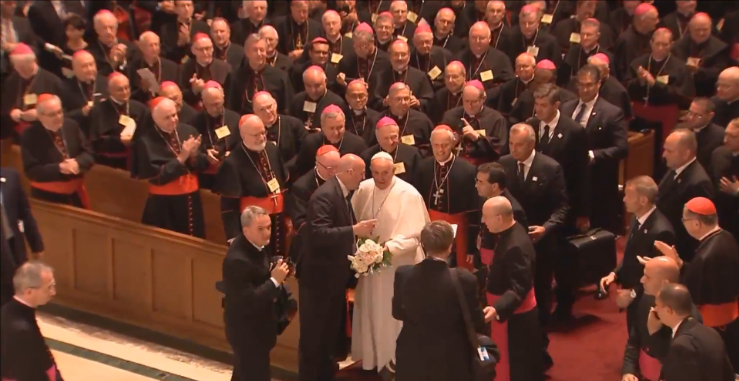 In light of this spiritual history, it is quite significant that Pope Francis is making his journey to the United States during the octave of the feast of St. Matthew, which was on Monday, September 21st. 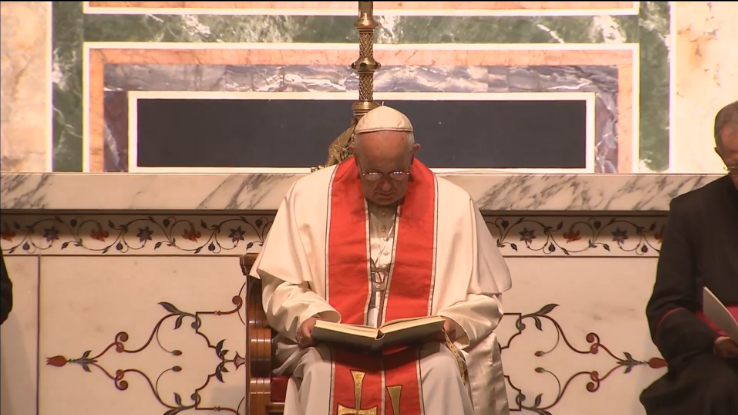 It was so beautiful to see our Holy Father with his brother bishops, to encourage and exhort them. Pope Francis is the symbol of unity for the One, Holy, Catholic, and Apostolic faith. 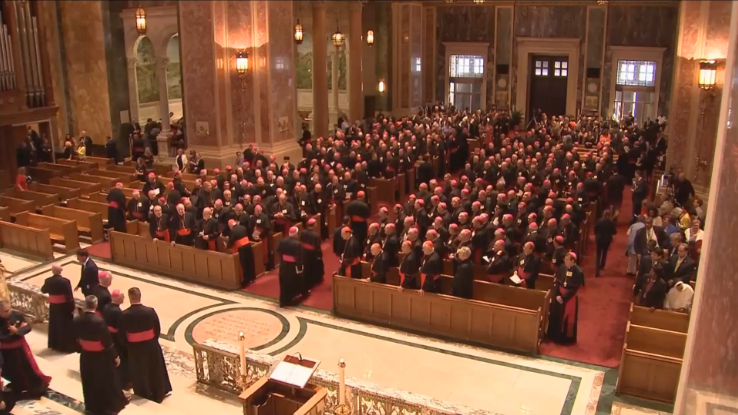 The crowds had a second chance to glimpse Pope Francis as he arrived at the Basilica of the National Shrine of the Immaculate Conception where the canonization Mass for Blessed Junipero Serra was set to take place. 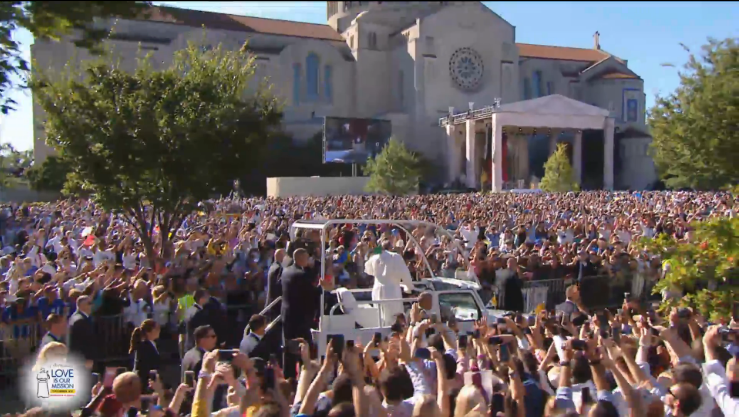 As Pope Francis greets the crowds in the Popemobile, the American bishops gather again at the National Shrine for this historic moment: the first canonization Mass on American soil. 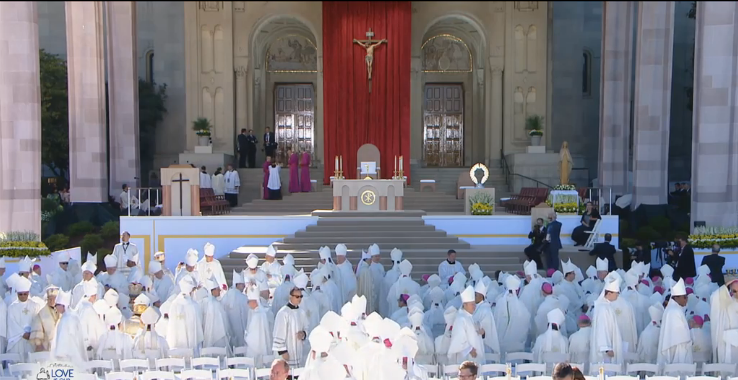 Pope Francis arrives at the Basilica with the D.C. Cardinals. 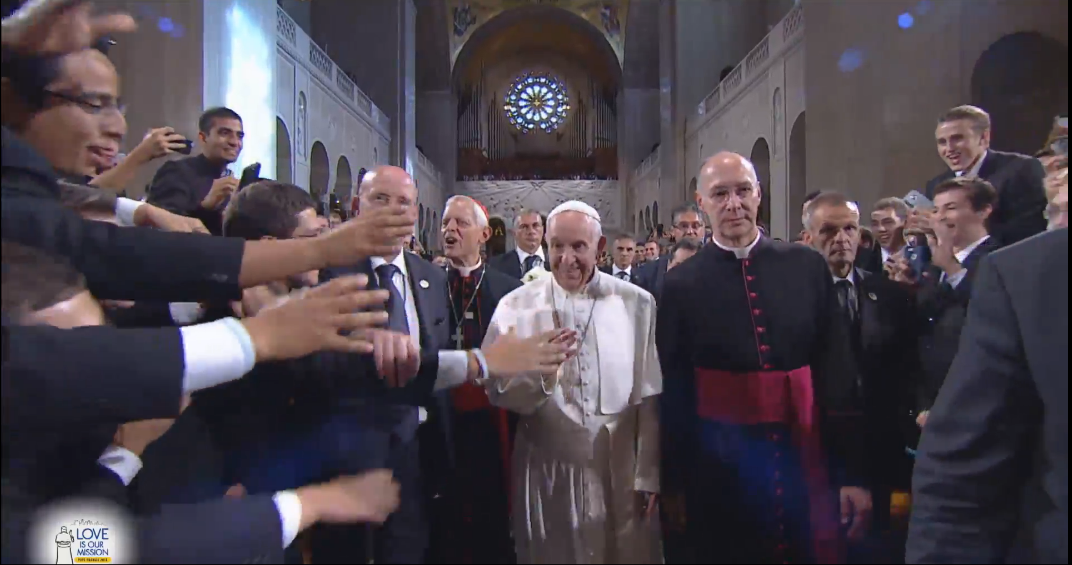 He stops for a moment to pray before vesting for Holy Mass. 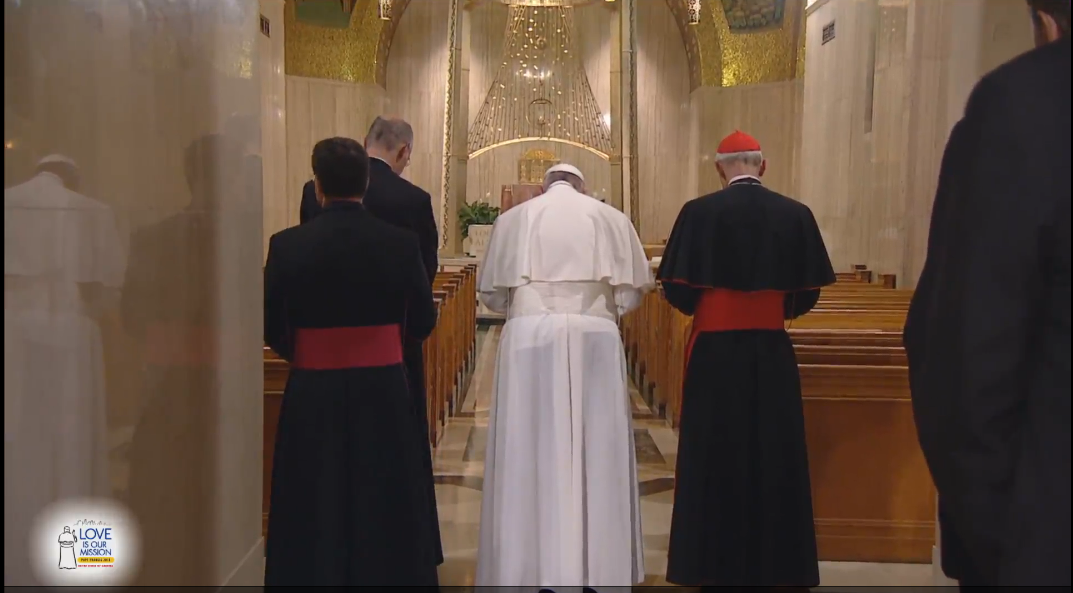 The canonization Mass was held outdoors at the National Shrine. Thank God for such a beautiful and sunny day! 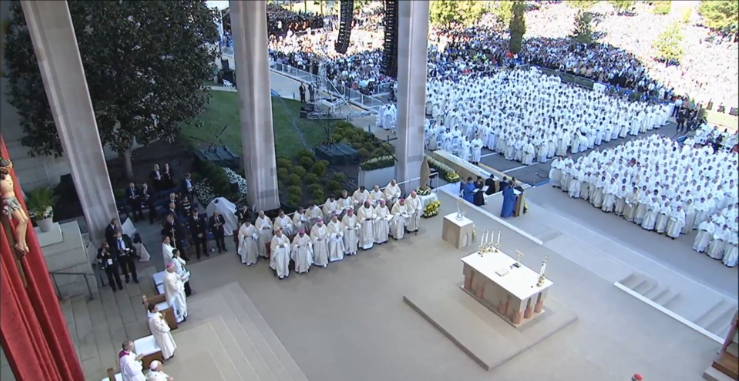 Pope Francis shows with the expression on his face the beauty and grandeur of this important moment on his apostolic journey. Read Pope Francis' homily for the Junipero Serra canonization Mass. 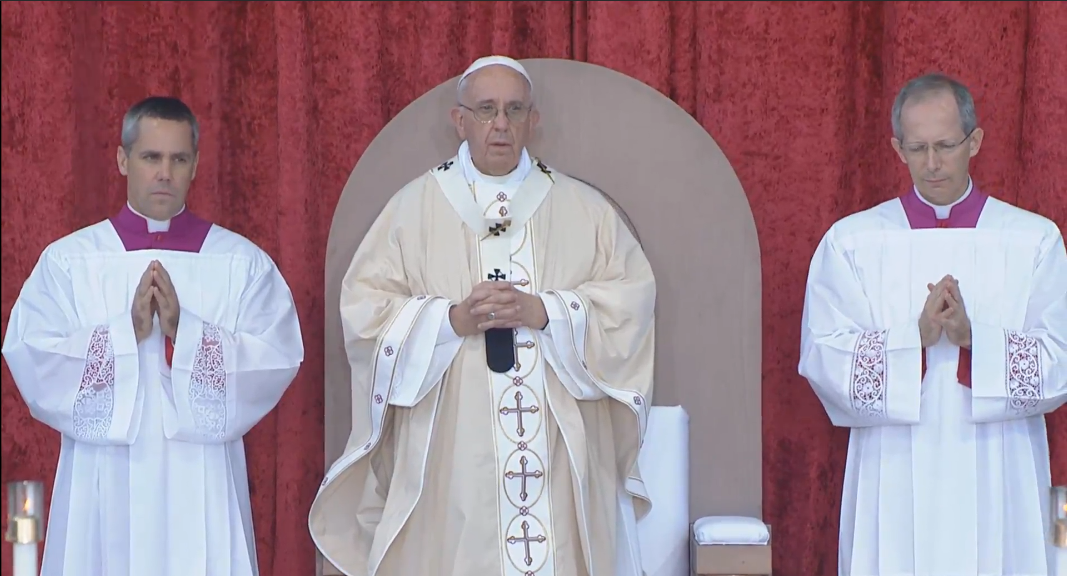 Junipero Serra was a Franciscan missionary from Spain to the Americas. He is most known for founding dozens of Catholic Missions along the coast of California. The history of that state, indeed of our country, cannot be told apart from the apostolic labors of this holy man who baptized so many souls for Jesus Christ. 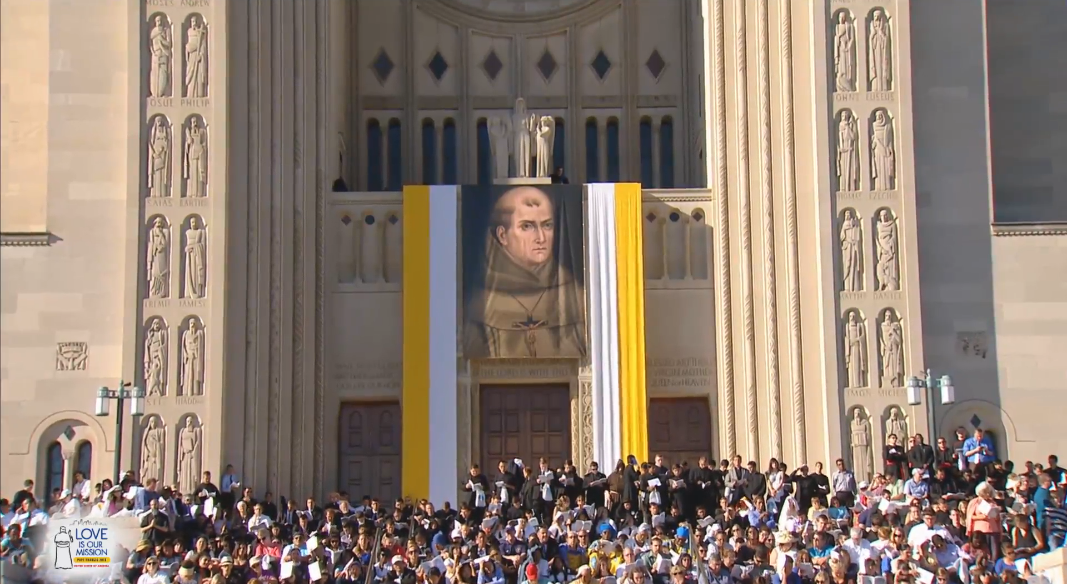 Moreover, Junipero Serra's Order took a special promise to spread devotion to Our Lady under her title of the Immaculate Conception. How fitting that the canonization Mass for this fruitful missionary to America is being said at this church, by this pope! Read the story of St. Junipero Serra here. 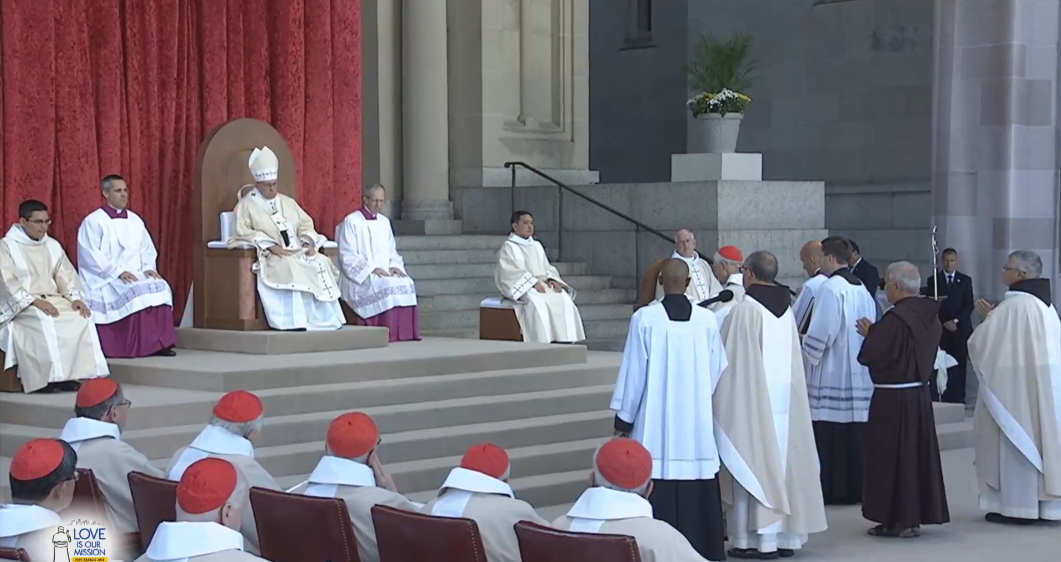 After Pope Francis proclaims Junipero Serra a saint, he continued celebrating the Holy Sacrifice of the Mass, his first in the United States. 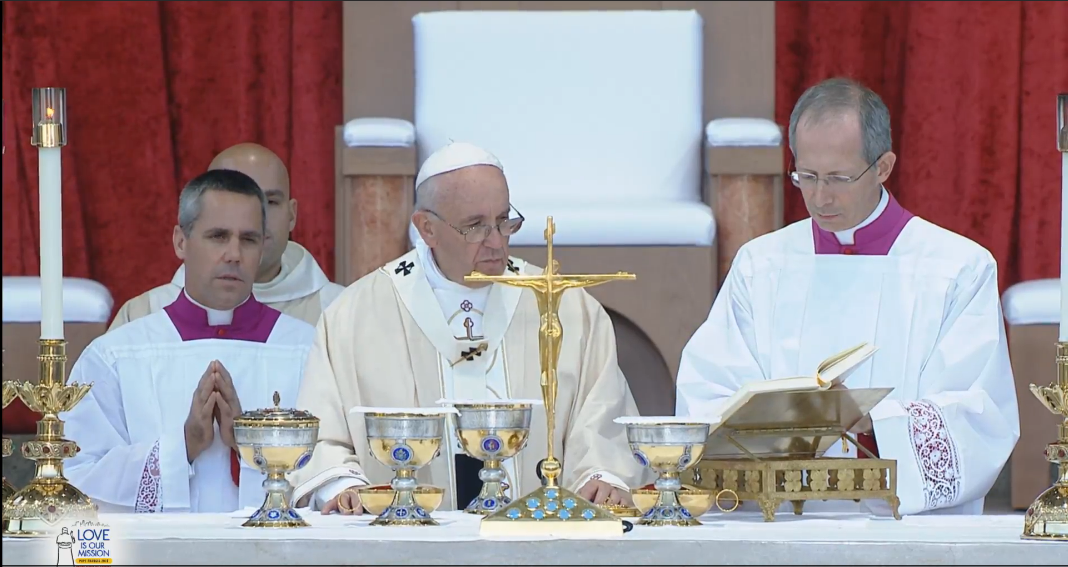 UPDATE: After the canonization Mass for St. Junipero Serra, Pope Francis made a surprise and unscheduled visit to the Little Sisters of the Poor in D.C. to encourage and support them in their legal battle for the cause of religious liberty. The Little Sisters of the Poor are currently suing the Obama administration over the HHS mandate which forces them to pay for contraception in their health insurance coverage. Awesome! 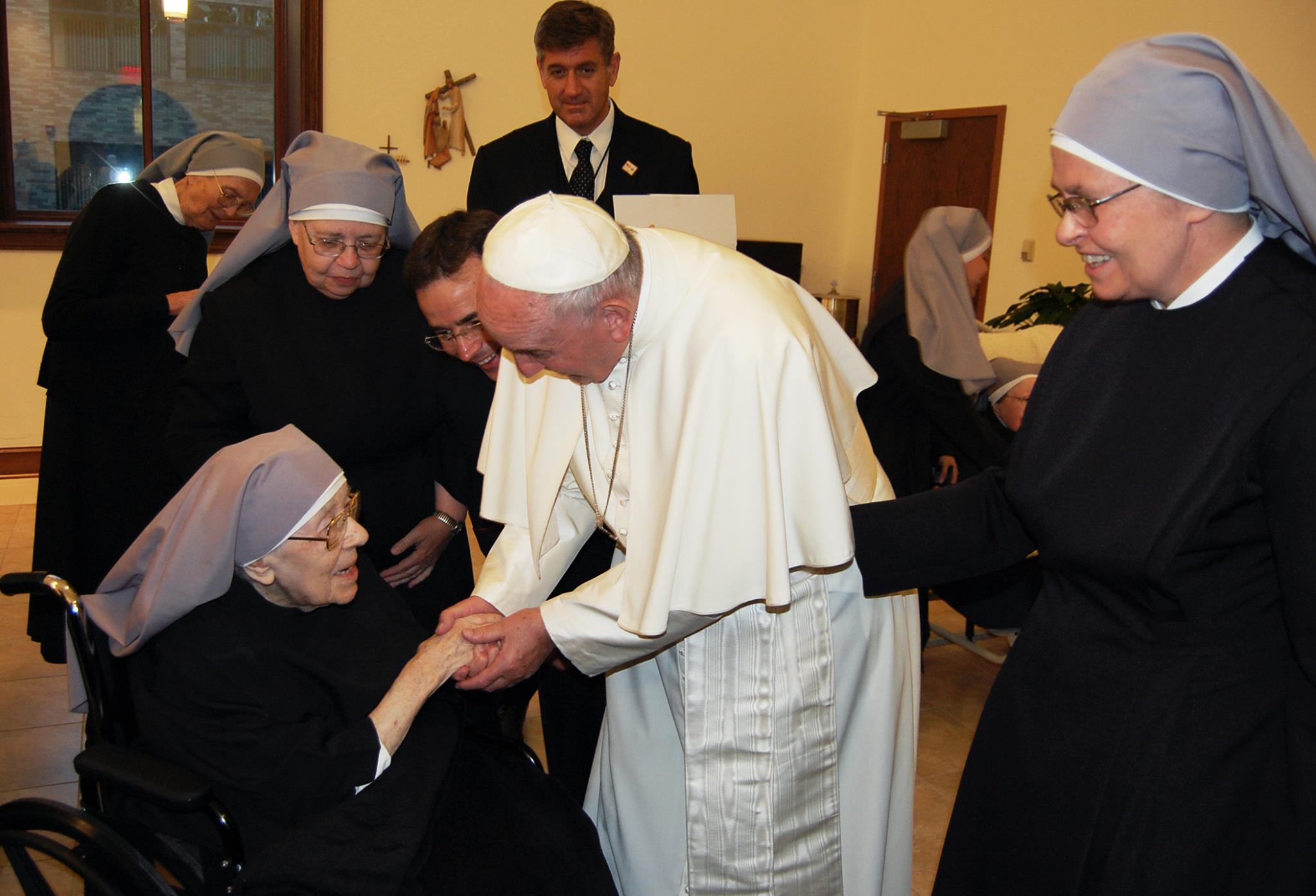 And that's the end of the highlights for this beautiful day.  We can't wait to see what tomorrow brings! 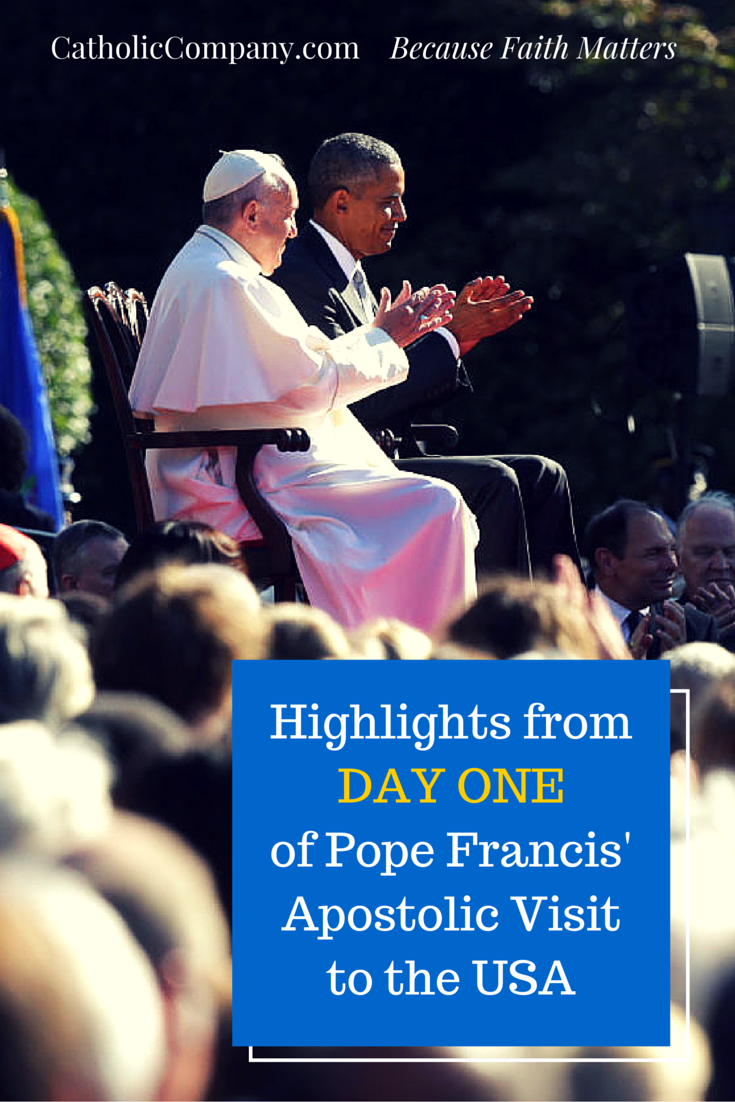