As I write this, I am sitting in the only chair left in our living room.

Boxes surround me, most of which are packed and awaiting tape and a Sharpie marker label.

After twenty-three years of living in the same home, we are moving. The amount of stuff we have recently taken to Goodwill and to the dump is both astounding and mortifying. And yet it should be no surprise that two decades, nine kids, and three dogs require more than just a few black trash bags.

By now, our rooms in the “old house” (as we already call it) barely resemble their former state. Beds are still here, along with sheets and towels and a few dressers, but little else is available: it’s all packed away somewhere in a POD in our driveway or in the new garage.

We have resorted to using paper plates and plastic utensils and eating whatever is left in the fridge before cleaning it out for the new owners.

There are only a few items in this room left to be packed, but I find myself lingering.

Shortly after we moved here all those years ago, we took the couch out to fit in floor-to-ceiling bookshelves that were sorely needed to accommodate the abundant number of books we own.

We replaced the couch with two smaller chairs and the room became more like a library. It was a favorite spot of mine not only because its proximity to spiritual reading made it an ideal place for prayer and reflection, but also because it provided a view of the big tree that we planted in our backyard.

After making coffee in the early morning I would often come in here to find a few minutes to pray and to think in quiet before the noises of the day began. It was also my go-to place to nurse a newborn in the early morning because it was downstairs, where no one could hear the baby cry. I suddenly realize how much I miss that sound.

Now I look out at the familiar tree in the back yard—it looks lonely and barren without its leaves. 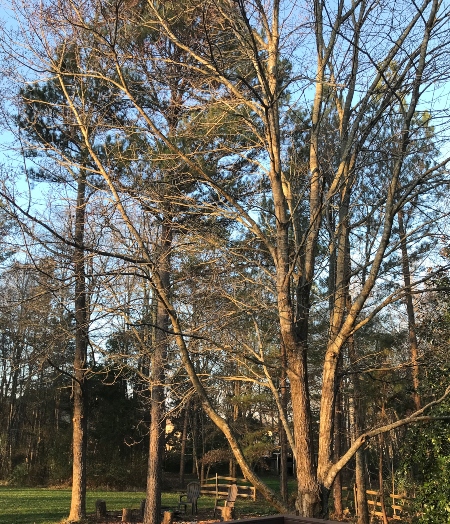 I recently read that moving is one of the top five most-stressful life events. It’s right up there with losing a job and the death of a loved one.

Perhaps that is why it has caught me a little off guard. Or maybe it's the fact that our fourth son, Peter, who is currently deployed to the Middle East, can’t say a proper goodbye to the home in which he grew up.

I feel unprepared for the tears that won’t stop rolling down my cheeks.

Wiping them away, I look around our home. I can’t help but wonder about the stories these walls would tell if they could talk. They would be beautiful and funny and messier with each chapter, no doubt.

They would tell of the times when a new baby came home for the first time from the hospital: Annie (child #5), then Grace, John, C.C., and Sam—always to the wonder of their brothers and sisters who were waiting and jockeying for position to hold their newest sibling in their own young arms.

If these walls could talk they would tell of family gathered to celebrate after First Communions, Confirmations, and graduations.

They would tell of the time when Peter, only seven or eight at that time, took a hammer to the head while building a fort outside with his brothers Thomas and Charlie and their friends the Chapman boys. Or the time when the kids would play the “sneaking game” with their cousins at night in the “woods” in the backyard.

They would tell of the accidental fire that was started out there with the help of Billy and Jack, our next door neighbors. Or the time that Charlie and Mary Kate were babysitting and they all took turns (including John, who was only a toddler) jumping from the top bannister to the five mattresses that had been carefully laid out on the floor below. (I only heard this story recently myself).

If these walls could talk, they would tell unhappy stories, too. Such as the time my husband James and I cried after we’d lost a baby to a miscarriage in the early second term of pregnancy. Or the time when James had to tell our kids that he had cancer.

If these walls could talk, they would tell of late nights (or early mornings) when I would sit in this room clutching my rosary, worried sick and praying for a teenager who was out far later than they should have been—hoping with every passing minute to hear the familiar sound of a car door in the driveway.

I grab the last box in the room and now carry it to the POD. I feel a little less heavy. A good cry can do that.

The other day, the young couple who is buying our house came over to measure a few rooms and to meet us. I noticed how young they seemed. They were excited and smiling, and after we talked for a while in the kitchen, the young woman said the sweetest thing: “Knowing how you raised nine children here makes me want to also fill this home with children.”

My heart was gladdened.

It is a good time to leave. Our oldest son Charlie, and his wife Julia, will have a baby in August (our first grandchild). Peter, the one who is currently deployed, will be marrying one month later, in early September.

Our family is still growing and while I know it will be hard to pull out of this driveway for the last time in the next few days, I look forward to new walls where the next chapter of our lives will be written.

And I look forward to discovering a new favorite spot to sit and think and pray.