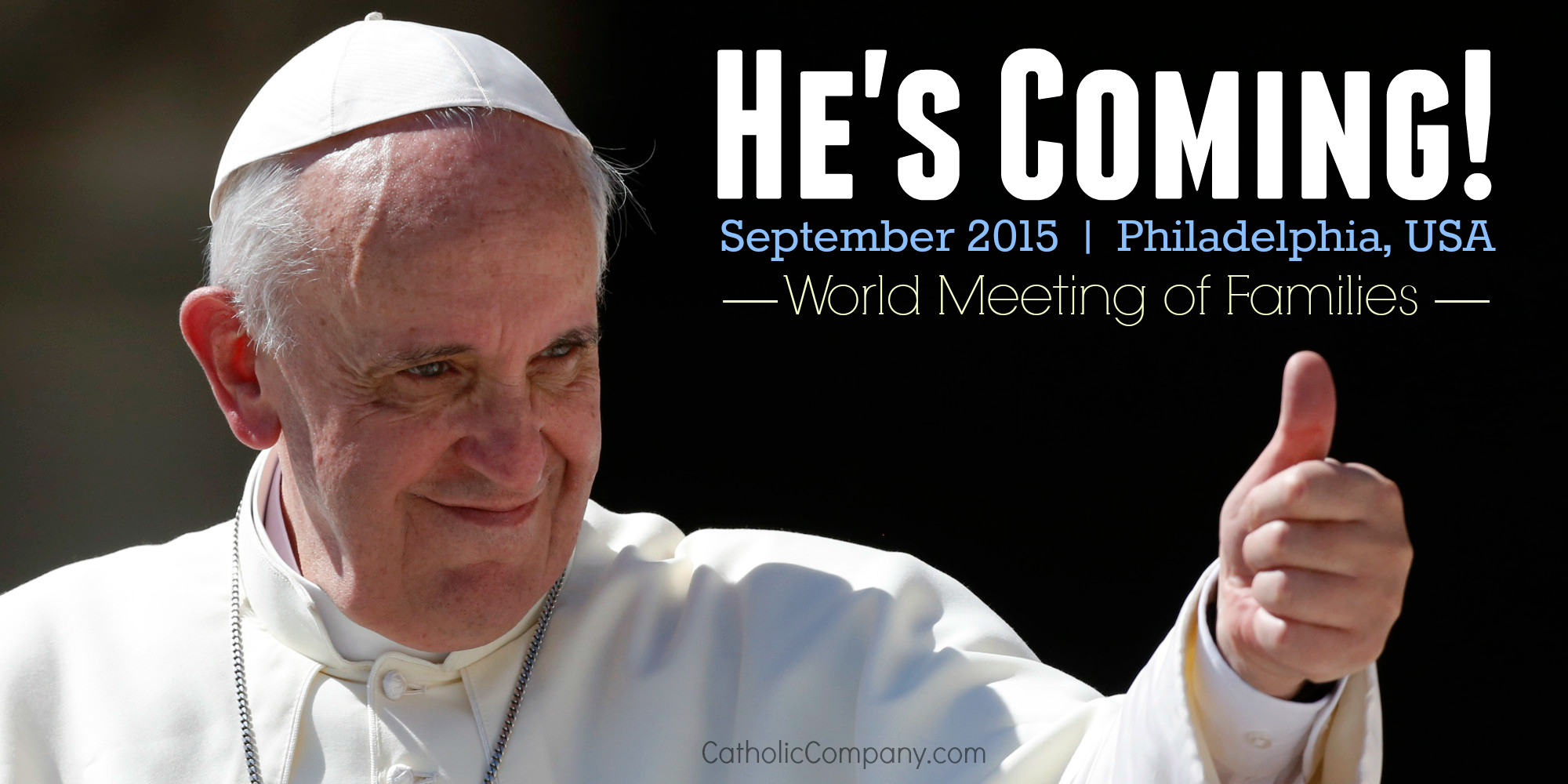 Pope confirms he will visit Philadelphia in September

VATICAN CITY (CNS) — Pope Francis said he would attend the World Meeting of Families in Philadelphia in September, making it the first confirmed stop on what is expected to be a more extensive papal visit to North America.

The pope made the announcement Nov. 17 in a speech opening an interreligious conference on traditional marriage.

“I would like to confirm that, God willing, in September 2015 I will go to Philadelphia for the eighth World Meeting of Families,” the pope said.

The announcement had been widely expected, since Pope Benedict XVI had said before his retirement that he hoped to attend the Philadelphia event. Popes typically fulfill their predecessors’ publicly known travel plans, as Pope Francis did in July 2013 when he attended World Youth Day in Rio de Janeiro.

Philadelphia Archbishop Charles J. Chaput, who was in Rome for the families meeting, told Catholic News Service the announcement was “a surprise in the sense that it was announced so early; you know usually they don’t make these announcements — four months out is the typical and here we are 10 months away, and the Holy Father said he is coming to Philadelphia.”

“The Holy Father has said that he’s going to be coming to Philadelphia for quite a few months,” he told Catholic News Service. “He’s been telling me that personally, but for him to announce it officially that he is coming so early is really quite an unusual thing, so it’s going to re-energize our efforts. There’s lot of enthusiasm already, but I think 90 percent of the enthusiasm’s based on the fact that the Holy Father will be with us, and now that he’s said that I expect that there will be even a double amount of enthusiasm … and I’m very happy about that.”

Catholicphilly.com reported the archbishop noted that Pope Francis has focused “on the many challenges that families face today globally. His charisma, presence and voice will electrify the gathering.

“As I’ve said many times before, I believe that the presence of the Holy Father will bring all of us — Catholic and non-Catholic alike — together in tremendously powerful, unifying and healing ways. We look forward to Pope Francis’ arrival in Philadelphia next September, and we will welcome him joyfully with open arms and prayerful hearts.”

In August, Pope Francis told reporters accompanying him on the plane back from South Korea that he “would like” to go to Philadelphia. The pope also noted that President Barack Obama and the U.S. Congress had invited him to Washington, D.C., and that the secretary-general of the United Nations had invited him to New York.

“Maybe the three cities together, no?” Pope Francis said, adding that he could also visit the shrine of Our Lady of Guadalupe in Mexico on the same trip — “but it is not certain.”

Jesuit Father Federico Lombardi, Vatican spokesman, told reporters Nov. 17 that Pope Francis wanted to “guarantee organizers” that he would be present at the meeting in Philadelphia, “but he did not say anything about other possible stops or events during that trip. And for now I do not have anything to add in that regard.”

Although few details of the papal visit have made public, organizers for the families’ congress expect Pope Francis to arrive Sept. 25 for an afternoon public visit with civic officials.

That would begin his first trip as pope to the United States and the second papal visit to Philadelphia in a generation; St. Pope John Paul II visited the city in 1979. The visit will mark the fourth time a sitting pontiff has visited the U.S.

During his visit, Pope Francis is expected to attend the Festival of Families Sept. 26, a cultural celebration for hundreds of thousands of people along Philadelphia’s main cultural boulevard, the Benjamin Franklin Parkway.

Donna Farrell, executive director for the 2015 World Meeting of Families and its chief planner, said although Philadelphia has hosted St. Pope John Paul’s visit, the city has “not had anything like this unique Festival of Families. It’s really going to be something special.”

Registration for the congress opened in mid-November. The meeting will be a weeklong series of talks, discussions and activities.

Pope Francis is expected to celebrate a public Mass for an estimated 1 million people on Sept. 26 on the steps of the Philadelphia Museum of Art, in full view of the crowds arrayed from the museum down the Ben Franklin Parkway.

“The presence of Pope Francis at the World Meeting of Families in our country will be a joyful moment for millions of Catholics and people of good will. Our great hope has been that the Holy Father would visit us next year to inspire our families in their mission of love. It is a blessing to hear the pope himself announce the much anticipated news,” Archbishop Kurtz said.

Contributing to this story were Matt Gambino in Philadelphia and Cindy Wooden at the Vatican.

From the Catholic News Agency:

The World Meeting of Families will take place shortly before the October 2015 meeting of the Synod of Bishops on the Family, which will discuss the mission of the family in the Church and in the world.

At the last World Meeting of Families in Milan, Italy in 2012, more than 1 million people representing 153 nations attended a papal Mass with Pope Benedict XVI.

The Philadelphia meeting will mark the first time that the event will be held in the United States. Registration for the 2015 World Meeting of Families began on Nov. 10.

The World Meeting of Families on Social Media: