At the closing of the Second Vatican Council, on December 8, 1965, Pope Paul VI addressed the following remarks to women:

"As you know, the Church is proud to have glorified and liberated woman, and in the course of the centuries, in diversity of characters, to have brought into relief her basic equality with man. But the hour is coming, in fact has come, when the vocation of woman is being achieved in its fullness, the hour in which woman acquires in the world an influence, an effect and a power never hitherto achieved. That is why, at this moment when the human race is under-going so deep a transformation, women impregnated with the spirit of the Gospel can do so much to aid mankind in not falling."

Justice Amy Coney Barrett is one such woman.

A devout Catholic, Justice Barrett has said that family is at the core of who she is. One of twenty-nine grandchildren and the oldest sister in a family of seven siblings, Amy Coney Barrett and her husband also have seven children, who range in age from eight to eighteen. Family is "everything" to Amy Coney Barrett.

Their oldest daughter, Emma, attends Notre Dame University. Tess and Vivian are both sixteen and are juniors in high school. John Peter is in 6th grade, Liam in 5th, Juliet in 3rd, and Benjamin in 2nd. 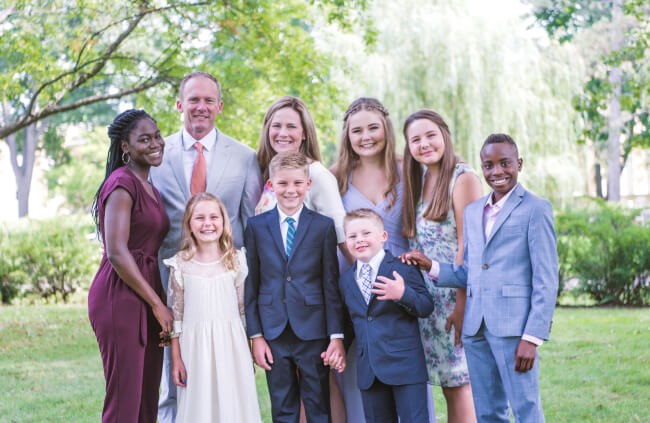 A Mom With Ordinary Duties (And Extraordinary Ones)

Justice Amy Coney Barrett is a mother, just like the rest of us mothers.

In October of 2017, with just moments to go until she was voted into the 7th District Court of Appeals by the U.S. Senate, Barrett was doing the same thing that I was doing: she was outside trick-or-treating with her kids.

Barrett has to deal with all the struggles that other mothers experience, saying recently that she and her husband have had plenty of "soul-searching and anxiety about balancing kids and work" over the years.

Yes, family is at the forefront of Barrett's identity. "What greater thing can you do than raise children?" she said. "That's where you have your greatest impact on the world."

Both Republicans and Democrats remarked during her hearing at what a "remarkable mother" Amy Coney Barrett is, calling her "a tireless mother and professional."

In her response to their praise, Barrett was quick to say how grateful she is for her husband's aunt, who has provided the family with childcare for sixteen years—since Emma was little: "Our consistent, in-the-home childcare has been a significant factor in making my career possible." 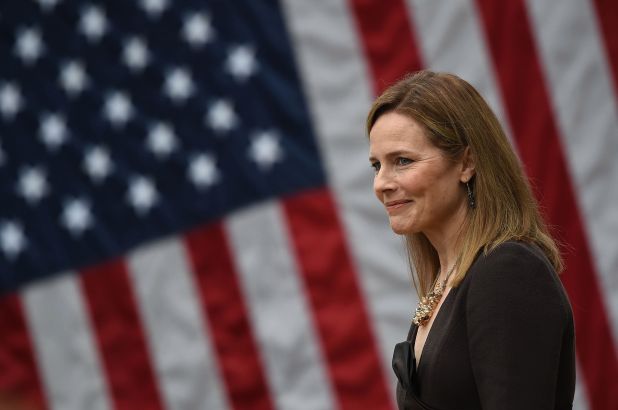 Although she is not yet fifty years old, her career has certainly been a full one.

An article in the New York Times about then-Judge Barrett stated:

"Judge Barrett is a new kind of icon—one they have not seen before in American cultural and political life: a woman who is both unabashedly ambitious and deeply religious, who has excelled at the heights of a demanding profession even as she speaks openly about prioritizing her conservative Christian faith and family."

In my own life as a mother, it can sometimes feel like I am juggling an overwhelming amount of balls in the air—so I cannot begin to imagine all that the Honorable Justice Amy Coney Barrett has on her plate.

I realize that it is not simply the "tasks" that we mothers perform but also the myriad of emotions that come along with parenting—the joys, sorrows, worries, or concerns of any given season—that seem to constantly vie for our attention.

Knowing that Justice Amy Coney Barrett has similar thoughts and concerns as a parent, is perhaps, why I was so impressed with her poise during the Senate Confirmation hearings. With her children sitting behind her, I could only imagine what might be running through her mind as she responded to the questions posed to her by the Senate Judiciary Committee.

Justice Barrett will no doubt have to sacrifice some of her attention to her own family for the extreme responsibility of being a member of the Supreme Court of the United States of America.

President Donald Trump referred to this responsibility when he said the following words at her swearing-in:

"Justice Barrett, as you take your oath tonight, the legacy of our ancestors falls to you. The American people put their trust in you and their faith in you as you take up the task of defending our laws, our Constitution, and this country that we all love. We ask God to give you wisdom and courage. I know you will make us all very, very proud."

She is certainly immensely qualified for the job of Supreme Court Justice. Following are just some of the achievements and accolades listed by the White House for Barrett, who received them in her career as a lawyer, judge, and law professor:

The lifetime appointment of a Justice of the United States is an event of major significance in American politics because of the enormous power that the Supreme Court exercises as the highest appellate court in the federal judiciary.

I began this article with the words of Pope Paul VI which he addressed to women at the close of the Second Vatican Council. A lot has happened in our nation since then.

Today, all of us in our individual vocations are called to the same mission that Pope Paul IV spoke of, which "can do so much to aid mankind in not falling." But we can't do it without the help of God.

Let us pray for the newest member of the highest court in the land, the Honorable Justice Amy Coney Barrett; for all of her fellow Justices on the Supreme Court of the United States of America; and for all of us in this dear and beloved country; that in whatever vocation we are called to, we will turn to Our Lord who is the true Supreme Power.

A Prayer For Those Serving on the Supreme Court

O God our Creator,
from your provident hand we have received our right to life, liberty, and the pursuit of happiness. You have called us as your people and given us the right and the duty to worship you, the only true God, and your Son, Jesus Christ. Through the power and working of your Holy Spirit, you call us to live out our faith in the midst of the world, bringing the light and the saving truth of the Gospel to every corner of society.
We ask you to bless us in our vigilance for the gift of religious liberty. Give us the strength of mind and heart to readily defend our freedoms when they are threatened;
give us courage in making our voices heard on behalf of the rights of your Church and the freedom of conscience of all people of faith.
Grant, we pray, O heavenly Father,
a clear and united voice to all your sons and daughters gathered in your Church in this decisive hour in the history of our nation, so that, with every trial withstood and every danger overcome—for the sake of our children, our grandchildren,
and all who come after us—
this great land will always be “one nation, under God, indivisible, with liberty and justice for all.”
We ask this through Christ our Lord.
Amen.