You probably know St. Maximilian Kolbe as the Martyr of Charity, Saint of Auschwitz, and Apostle of Mary.

He was all of this and more as Mary's devoted son and God's holy priest in the Franciscan Order.

He was also the Founder of the Militia Immaculata, which he began in 1917, along with six fellow seminarians in Poland.

One of Maximilian Kolbe's classmates at the seminary said of this remarkable saint,

"He often said that he desired to consecrate his entire life to a great idea."

This great idea became the Militia Immaculata, or the Army of Our Lady. Fondly called "the MI" by its founders, it flourishes throughout the world today, with the same mission and vision.

The scope was certainly grand: to win the entire world for the Immaculata (Mary's Latin title as the Immaculate Conception), and through her, for the Most Sacred Heart of Jesus.

Kolbe planned to accomplish this by worldwide consecration and service to Mary Immaculate. It became his entire purpose, and led to his holy martyrdom.

Fr. Kolbe said of the mission, which was an international public association of the faithful,

“The MI is a global vision of Catholic life under a new form, consisting in the bond with the Immaculata, our universal Mediatrix before Jesus.”
—St. Maximilian Kolbe 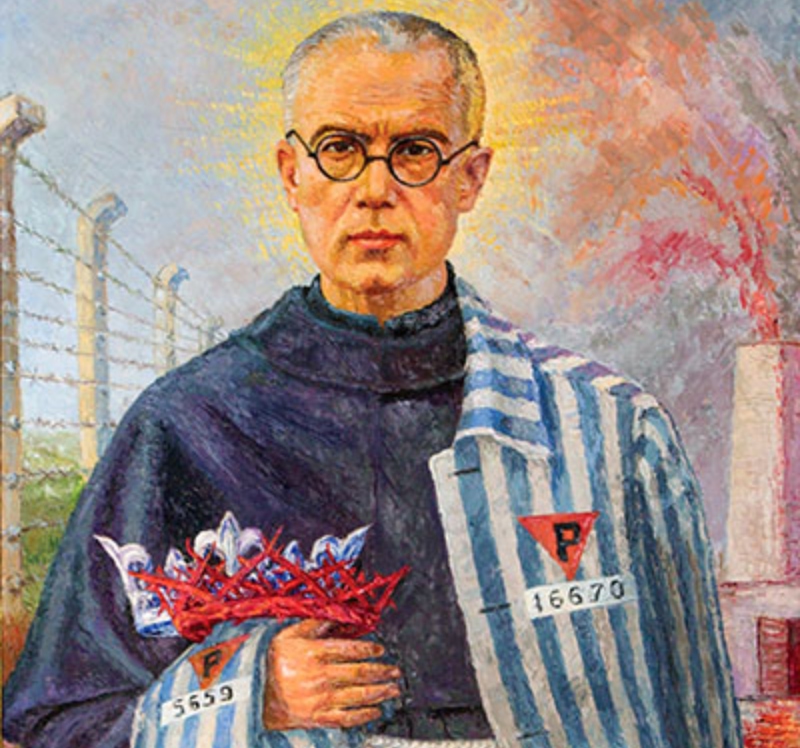 Before there was the MI, there was little mischievous Raymond Kolbe, whose exasperated mother once exclaimed in frustration, "Raymond, what will become of you?"

Filled with contrition and and shaken by her words, he went straight to the church and asked Our Lady this same question.

Shortly afterward, young Raymond bought a statue of Our Lady that he kept with him throughout his childhood and into the minor seminary, where he eventually studied to become a Franciscan.

He took the religious name "Maximilian."

Brother Maximillian received the white crown professing his religious vows to the Franciscan Order. His vow of chastity was matched by his purity of intention as he sought to direct all his thoughts, words, and actions to the divine purpose of winning souls for Christ.

He recounted the beautiful story of his lifelong allegiance to Mary in 1935:

"I still recall how as a young boy I had bought a small statue of the Immaculata for five kopeks. And in the minor seminary, where we attended Mass in the choir, with my face to the ground, I promised the Most Blessed Virgin Mary, whose im­age overlooked the altar, that I would fight for her. But how? I did not know. Yet, I envisioned a fight with material weapons." 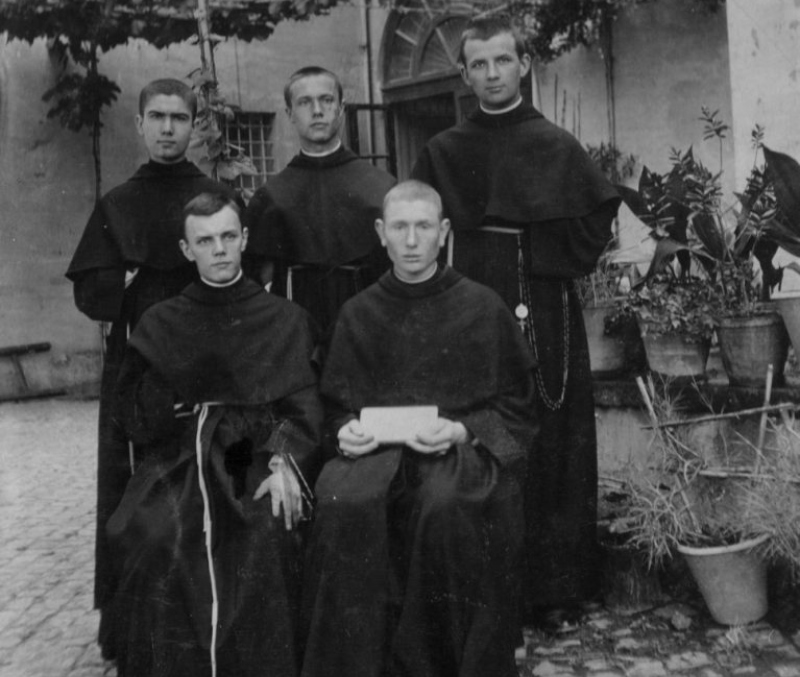 The first meeting of the MI took place October 16, 1917. Br. Maximilian had been diagnosed with tuberculosis and excused from studies for a period of rest. During this time, he developed the program of the Militia Immaculata and presented it to his Vicar General, who gave him the funds to purchase Miraculous Medals.

The pious association at first consisted of the six founders' private prayer and distribution of the medals to the local youth, along with formation about Mary as the Immaculate Conception. This provided the explanation of her holiness and her ability to shape and perfect ours.

Fr. Kolbe wrote beautifully and extensively on this topic; it was his passion. He saw the Immaculata as our Queen, our sovereign, and our primary means of vanquishing Satan. Through her, all graces flowed, and they started with her Immaculate Conception.

This was a war for the hearts of mankind.

Reaching the World In Print

A few years later, his movement growing intensely, Fr. Kolbe began publishing a monthly magazine. The Knight of the Immaculata reached over 70,000 people each month.

A companion children's magazine, The Little Knight, helped reach and teach the youth.

The MI distributed these for free, with the cost on the cover, and accepted donations toward publication. 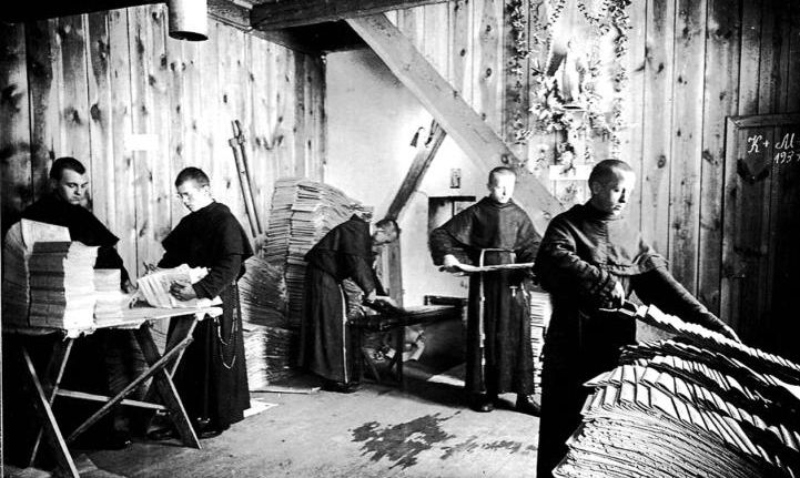 Demand was so great that he hired a train to transport the magazines.

By 1938, the Community he founded was the largest in the world, and with the help of Mary, The Immaculata, he ran the largest printing press in Central Europe, all to honor Our Lady and win souls for Jesus.

The Message of the MI

The Militia Immaculata provided formation in the teachings of the Catholic Church, fostered love for the Eucharist and sacramental life, and promoted a deep understanding of Our Lady's role in the plan of salvation. It educated members on the graces of Consecration to Mary under her title of Immaculata, and challenged them to become generous instruments in her hands, to win the world to Christ.

Fr. Kolbe saw it as a spiritual war against Satan.

It was a message of great hope during the horrible events of World War I and II, when people endured such tremendous suffering.

The MI's message of faith, hope, and trust in Mary Immaculate remains the same today as it was when Fr. Kolbe began the revolutionary movement over 100 years ago. 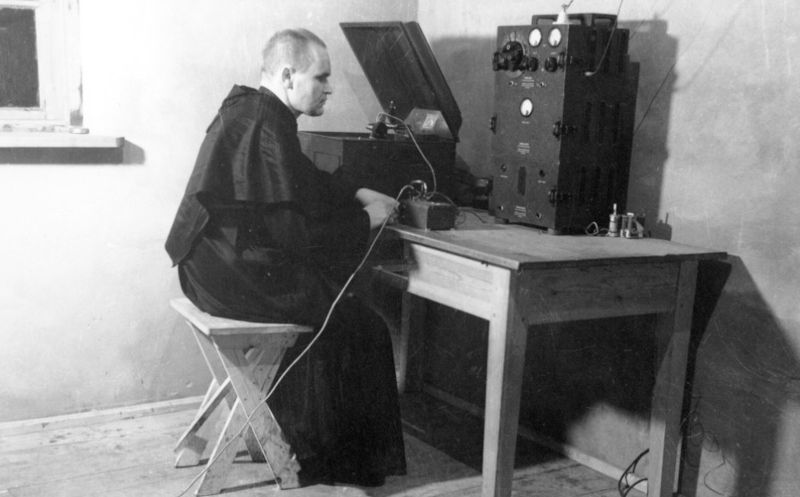 To Asia and Home Again

The saint convinced his superiors to allow him to travel to Japan, China, and India, where he continued to spread the message of the Immaculate Conception through the MI, published his magazines, and founded a monastery in Japan that still exists today.

Fr. Kolbe returned to Poland six years later, where the monastery he founded had grown from 20 to over 800 men. This became the seat of his press efforts, aided by universities in Warsaw who designed factories, advanced his printing technology, and implemented processes that allowed the MI to more readily spread its important message in turbulent times.

Demand for formation was so great that train routes and footpaths were no longer sufficient. Kolbe sent two friars to train as airplane pilots to continue spreading the Gospel through his magazine, which had the largest circulation in all of Europe.

He began a radio broadcast, and the reach of the MI grew beyond anyone's wildest imaginings. 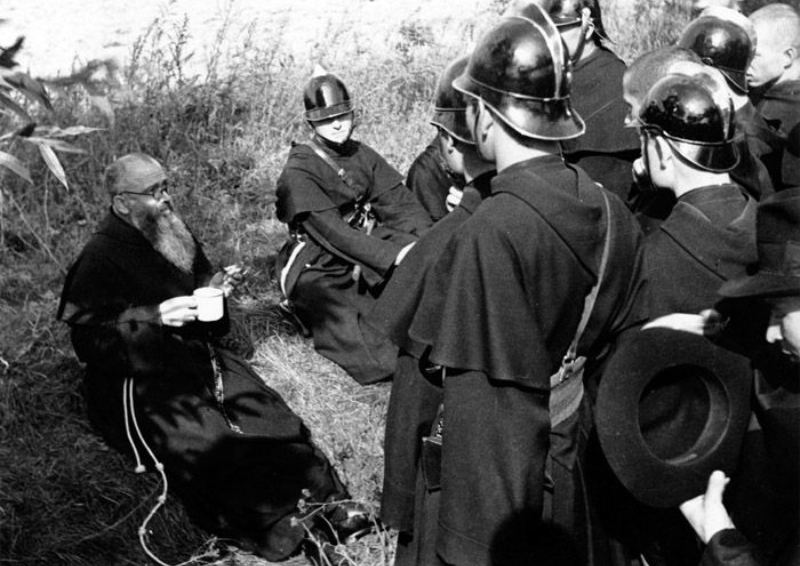 Soldier for Our Lady

Maximilian's work did not please the Nazis, who had occupied Poland in late 1939 during WWII. The Brothers pleaded with their Founder to go into hiding. He replied simply,

"I have a mission. The Immaculata has a mission to fulfill."

St. Maximilian knew that the monastery would soon be captured and sent most of the friars home. The Nazis seized the monastery, arrested Fr. Kolbe, and sent him to prison with four of his brother priests. Shortly afterward, they released the men, who turned to Eucharistic Adoration as their apostolate.

Father set up a makeshift hospital and sheltered over 2,000 Jewish men, women and children. He also issued anti-Nazi publications and published one more magazine.

Arrested again, he was sent to Auschwitz.

Five months later, three men in his prison camp escaped. The commander chose ten men to be starved to death as an example to the others. St. Maximilian Kolbe volunteered to take the place of one man who had a wife and children. The ten men were stripped naked and sent to a basement bunker to die.

The Saint of Auschwitz was the last one alive two weeks later. The Nazis killed him with an injection of poisonous carbolic acid on August 14, 1941, the vigil of the Solemnity of Our Lady's Assumption.

The red crown was his.

What happened to the Militia Immaculata founded by St Maximilian Kolbe?

St. Maximilian Kolbe's movement has roused a Marian army to win the world for Christ. Anyone can become a member, consecrating themselves to the Immaculata, and aspiring to personal holiness that will collectively transform our world.

The MI provides Catholic formation to its members and now shares the inspiring and beautiful spirituality of St. Maximilian Kolbe. Through total consecration to Mary as the most perfect follower of Jesus, members are called to holiness with her.

The goal of the MI is the transformation of souls at the hand of Our Lady. Members then give witness to the Gospel in their everyday lives, transforming the world by love. Imagine the power of this movement over time, and the untold graces it has brought to our world!

Today there are over three million MI members in 48 countries.

Learn more about the Militia Immaculata

St. Maximilian Kolbe wrote a beautiful Consecration Prayer for the Militia. I try to pray it each morning. It reminds me that Our Lady is my model and that through her, I too can be transformed. Each of us can contribute to ushering in the Kingdom of God with the Immaculata to guide us.

His prayer reminds us that Our Mother is always with us and that Jesus desires that we entrust everything to Him through her.

Knowing that St. Maximilian Kolbe wrote and lived out this prayer is a source of great consolation when I pray it:

O Immaculata, Queen of Heaven and earth, refuge of sinners, and our most loving Mother, God has willed to entrust the entire order of mercy to you. I, (name), a repentant sinner, cast myself at your feet, humbly imploring you to take me with all that I am and have, wholly to yourself as your possession and property. Please make of me, of all my powers of soul and body, of my whole life, death and eternity, whatever most pleases you.

If it pleases you, use all that I am and have without reserve, wholly to accomplish what was said of you: “She will crush your head,” and, “You alone have destroyed all heresies in the world.”

Let me be a fit instrument in your immaculate and merciful hands, for introducing and increasing your glory to the maximum in all the many strayed and indifferent souls, and thus help extend as far as possible the blessed kingdom of the most Sacred Heart of Jesus.

For wherever you enter, you obtain the grace of conversion and growth in holiness, since it is through your hands that all graces come to us from the most Sacred Heart of Jesus.

V. Allow me to praise you, O sacred Virgin.

R. Give me strength against your enemies.


St. Maximilian Kolbe, pray for us.