From the 1950s until now, readers of countless backgrounds and beliefs have been mesmerized by The Lord of the Rings, The Hobbit, and The Silmarillion. But the name of J.R.R. Tolkien is well known even to those who have no taste for fantasy literature.

Despite his fame, many fans of this literary genius are unaware that he was a devout Roman Catholic whose faith profoundly influenced his work. It was, in fact, Tolkien’s faith and frequent reception of the Sacraments that sustained him through the trials of personal life, the darkness of two world wars, the disappointment and suffering inflicted by members and leaders of the Church, and the scandal caused by destruction of the sacred liturgy.

I recently discovered a letter he wrote on November 1st, 1963 to his son Michael to provide encouragement in a time of upheaval. It is an astonishing letter, most especially because it feels as though it had been written today in the wake of egregious sins committed by some of our Catholic clergy.

We can benefit from the wisdom of this humble professor, who was a devout son of the Church. The advice Tolkien shared with his son is applicable to any century. It will always be relevant.

I’m going to write “questions,” and, using Tolkien’s letter to his son, allow him to “answer” in his own words.

Note: Tolkien’s italics are his—I have bolded some of his words to highlight their importance. I have also used two paragraphs from other letters to his sons.

Professor Tolkien, these are grave times for the Church. When the atrocities committed by certain clergy members were made known in the summer of 2018, it scandalized many and caused some to abandon the Church. Even the faith of well-catechized Catholics is sagging. What would you say to those who are struggling to overcome despair?

Professor J.R.R. Tolkien: You speak of 'sagging faith'...In the last resort faith is an act of the will, inspired by love. Our love may be chilled and our will eroded by the spectacle of the shortcomings, folly, and even sins of the Church and its ministers, but I do not think that one who has once had faith goes back over the line for these reasons (least of all anyone with any historical knowledge). 'Scandal' at most is an occasion of temptation—as indecency is to lust, which it does not make but arouses. It is convenient because it turns our eyes away from ourselves and our own faults to find a scapegoat…

I suppose the devil takes advantage of such scandal to keep us distracted by the sins of others, and to disturb our faith in Christ. What about our personal faults? Should we examine our own hearts, to see if we are striving to uphold the teachings of Jesus in our daily lives?

JRRT: The temptation to 'unbelief' (which really means rejection of Our Lord and His claims) is always there within us. Part of us longs to find an excuse for it outside of us. The stronger the inner temptation the more readily shall we be 'scandalized' by others. I think I am as sensitive as you (or any other Christian) to the 'scandals', both of clergy and laity. I have suffered grievously in my life from stupid, tired, dimmed, and even bad priests; but I now know enough about myself to be aware that I [would] not leave the Church (which for me would mean leaving the allegiance of Our Lord) for any such reasons: I [would] leave because I did not believe...I [would] deny the Blessed Sacrament, that is; call Our Lord a fraud to His face.

So what you’re saying is, each and every one of us has the capacity to turn against Our Lord if we don't humbly accept His grace. What would you say to someone outside the Catholic Church, who accuses Christ and His Church of fraudulence?

JRRT: If He is a fraud and the Gospels fraudulent—that is: garbled accounts of a demented megalomaniac (which is the only alternative [to not believing Christ is truly God]), then of course the spectacle exhibited by the Church...in history and today is simply evidence of a gigantic fraud. If not, however, then this spectacle is alas! only what was to be expected: it began before Easter…

Meaning, it began when Judas Iscariot, one of the Apostles and someone who was called by Christ to follow Him, betrayed the Son of God to His enemies...even though he knew Christ was innocent. And yet we are supposed to have faith and hope even when confronted with such scandal?

JRRT: [I]t does not affect faith at all—except that we may and should be deeply grieved. But we should grieve on Our Lord's behalf and for Him, associating ourselves with the scandalizers not the saints, not crying out that we cannot 'take' Judas Iscariot , or even the absurd and cowardly Simon Peter, or the silly women like James' mother, trying to push her sons. 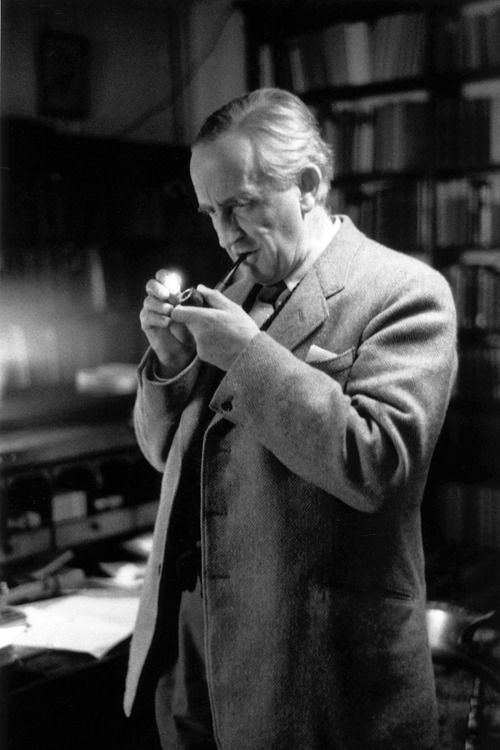 There are still scholars who insist that Christ never existed—that He is a fictitious character invented by religious fanatics. I think they will find this the easiest time to say to Catholics, “See! I told you so! The Church is a corrupt human institution, and Jesus was not a real person!”

JRRT: It takes a fantastic will to unbelief to suppose that Jesus never really 'happened', and more to suppose that he did not say the things recorded of him—so incapable of being 'invented' by anyone in the world at that time: such as 'before Abraham came to be I am' (John viii). 'He that hath seen me hath seen the Father' (John ix); or the promulgation of the Blessed Sacrament... : 'He that eateth my flesh and drinketh my blood hath eternal life'. We must therefore either believe in Him and in what he said and take the consequences; or reject him and take the consequences. I find it for myself difficult to believe that anyone who has ever been to Communion, even once, with at least right intention, can ever again reject Him without grave blame. (However, He alone knows each unique soul and its circumstances.)

These certainly aren't days that permit lukewarm Catholicism. It now requires an extraordinary amount of courage and zeal to witness to our faith, as I'm sure you know personally.

JRRT: I know quite well that, to you as to me, the Church which once felt like a refuge, now often feels like a trap. There is nowhere else to go! (I wonder if this desperate feeling, the last state of loyalty hanging on, was not, even more often than is actually recorded in the Gospels, felt by Our Lord's followers in His earthly life-time?) I think there is nothing to do but to pray, for the Church, the Vicar of Christ, and for ourselves; and meanwhile to exercise the virtue of loyalty, which indeed only becomes a virtue when one is under pressure to desert it.

What would you say to those who are leaving the Catholic Church and joining other churches?

JRRT: I myself am convinced by the Petrine claims, nor looking around the world does there seem much doubt which (if Christianity is true) is the True Church, the temple of the Spirit dying by living, corrupt but holy, self-reforming and rearising. But for me that Church of which the Pope is the acknowledged head on earth has as chief claim that it is the one that has (and still does) ever defended the Blessed Sacrament, and given it most honour, and put it (as Christ plainly intended) in the prime place. 'Feed my sheep' was His last charge to St. Peter; and since His words are always first to be understood literally, I suppose them to refer primarily to the Bread of Life. 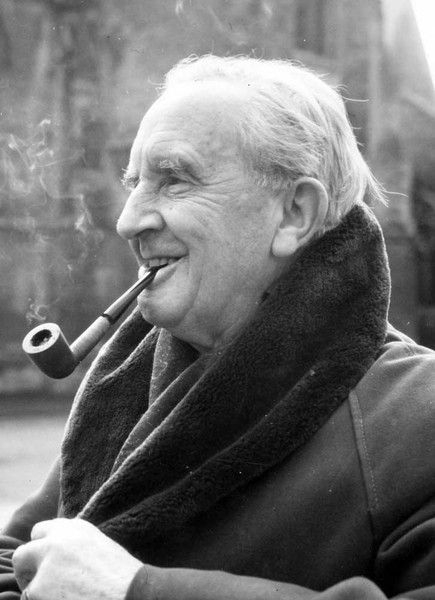 And what advice do you have for Catholics who are sad, weary, discouraged, and struggling to keep faith?

JRRT: The only cure for sagging or fainting faith is Communion. Though always Itself, perfect and complete and inviolate, the Blessed Sacrament does not operate completely and once for all in any of us. Like the act of Faith it must be continuous and grow by exercise. Frequency is of the highest effect. Seven times a week is more nourishing than seven times at intervals...

It has been an honor to speak with you, Professor Tolkien. Thank you for your time. Do you have any parting words for our readers?

JRRT: Out of the darkness of my life, so much frustrated, I put before you the one great thing to love on earth: the Blessed Sacrament...There you will find romance, glory, honour, fidelity, and the true way of all our loves on earth...eternal abundance, which every man's heart desires. 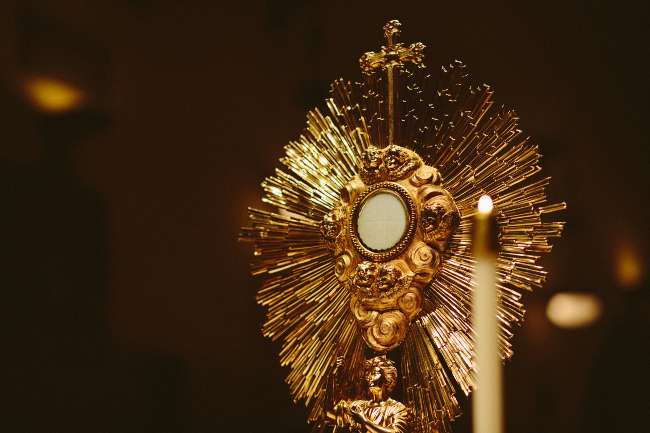 J.R.R. Tolkien’s cause for canonization, though not officially underway, has been initiated. A Mass was celebrated in the Oxford Oratory in 2017 for the intention that his cause for beatification be opened. 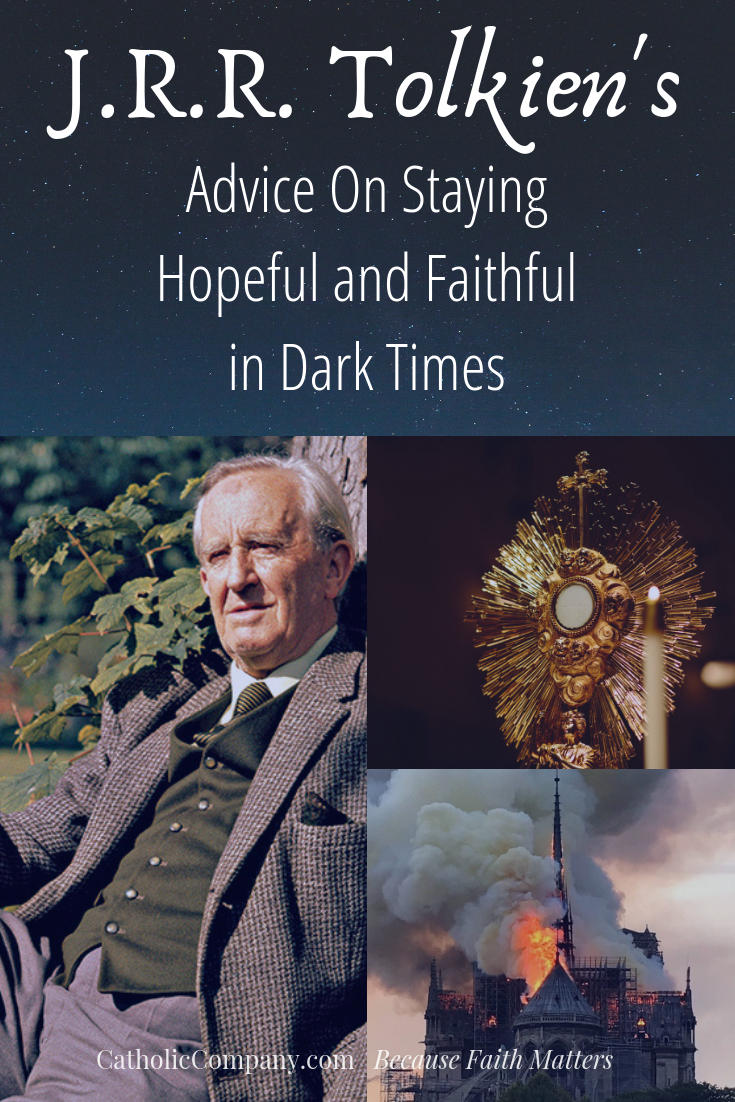