September 14th is the feast day of the Exaltation of the Holy Cross, also known as the Triumph of the Cross or the Elevation of the Cross. This is the day the Church celebrates both the discovery and the recovery of the True Cross of Jesus Christ.

Read below for the very interesting historical account surrounding this ancient feast day.

The Roman Emperor Constantine's mother, St. Helena, a convert to Christianity, went on a pilgrimage to the Holy Land to locate where the important events in the life of Jesus Christ occurred, and to preserve the relics of the Christian faith that remained there. One of her goals was to find the place of Jesus' crucifixion and the very Cross on which he was hung.

Read St. Helena and Her Love for The Cross

Through interviewing many locals, and with the assistance of the Bishop of Jerusalem, St. Macarius, she discovered the spot and found the True Cross which had been previously hidden by the Jews.  According to the historian Rufinus, the identity of the True Cross was confirmed by a miraculous healing after St. Macarius recited this prayer:

"O Lord, who by the Passion of Thine only Son on the cross, didst deign to restore salvation to mankind, and who even now hast inspired thy handmaid Helena to seek for the blessed wood to which the author of our salvation was nailed, show clearly which it was, among the three crosses, that was raised for Thy glory. Distinguish it from those which only served for a common execution. Let this woman who is now expiring return from death's door as soon as she is touched by the wood of salvation."

The date of this discovery and miracle, according to tradition, was May 3rd, 326 A.D. St. Helena had a church built on the original site of Jesus' crucifixion, burial, and resurrection, known as the Church of the Holy Sepulchre.  Her son Constantine dedicated this church on September 13-14 in the year 335 A.D. Even today, the Stations of the Cross in Jerusalem, or the Via Dolorosa, end at this very spot.

The True Cross was considered a most valuable treasure of the Church and became a highly venerated object, and the feast honoring the Elevation of the Holy Cross has continually been celebrated until this day. It is celebrated on May 3rd on the old Roman calendar (the date of its discovery), and on September 14th in Jerusalem and on the new Roman calendar (the date the church was dedicated). 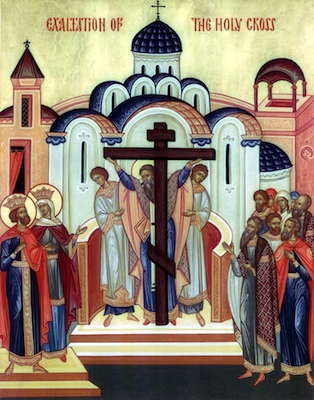 THE TRUE CROSS IS STOLEN

The Cross of Christ was kept by the Church in Jerusalem, but was absconded by Chosroas, King of the Persians, in the year 614 A.D. after the Persian invasion of Syria and Palestine. In the year 629 A.D. the Cross was recovered and brought back to Jerusalem by Emperor Heraclius of Constantinople. The relic of the True Cross was then restored to its place in the Church of the Holy Sepulchre.

The date the True Cross was brought back to Jerusalem was September 14th! The anniversary of the dedication of the Church of the Holy Sepulchre, the date on which Jerusalem celebrated the feast of the Triumph of the Holy Cross.

Tradition has it that Emperor Heraclius carried the Cross on his back, a public act of homage, in order to restore it to its rightful place; but, he was only able to move it after he had removed his royal garments and put on the humble garments of repentance instead.

326 A.D.: St. Helena discovers the True Cross in Jerusalem on May 3rd.

335 A.D.: Constantine dedicates the Church of the Holy Sepulcher on September 14th.

614 A.D.: Jerusalem is invaded by the Persians who steal the True Cross.

629 A.D.: The True Cross is recovered and brought back to Jerusalem on September 14th.

It's also why Catholic Christians and Eastern Christians keep crosses and crucifixes in their homes, usually on their wall or above their doorway.  In fact, a cross or a crucifix put in a place of honor is a sure mark of a Christian home.

If you don't have a cross or a crucifix in your home, consider choosing one on this special feast day, have it blessed, and place it in a prominent place in your home where it will be honored and venerated.

This article has been updated and was originally published in May 2012. © The Catholic Company