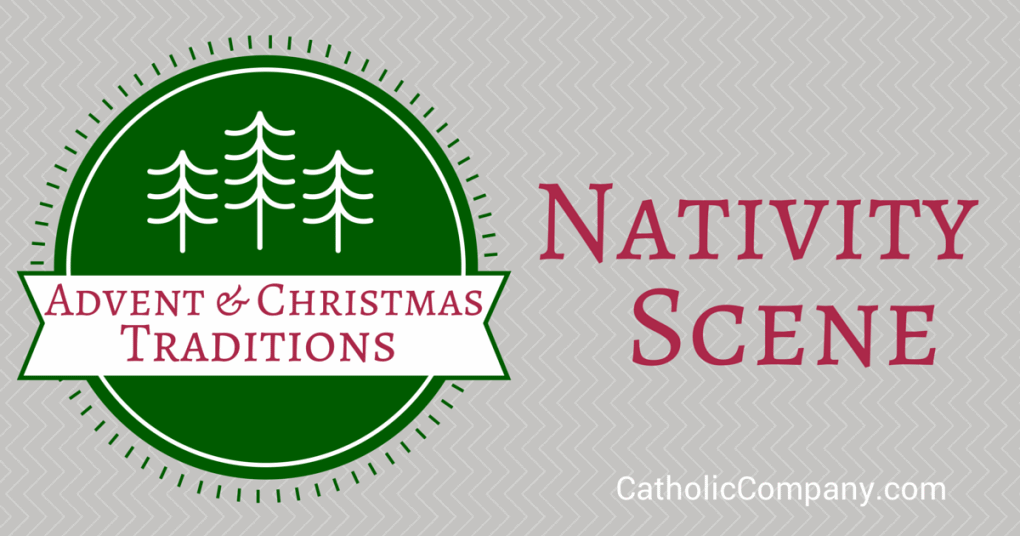 Nativity scenes, also called manger scenes or creches, have been a popular Advent and Christmas decoration for homes, parishes, and public places for hundreds of years. And, did you know, it originated with a Catholic saint? St. Francis of Assisi had a special devotion to the Child Jesus, and he is credited with creating the first nativity scene on Christmas Eve of the year 1223. He recreated the scene of Christ's birth in a special service and Mass he held inside of a cave, inviting both his fellow friars and the townspeople to join in the celebration.

It is said that St. Francis was first inspired by this idea after visiting the historical place of Christ's birth on a pilgrimage to the Holy Land. It is likely this event which deepened his devotion to the Child Jesus. Later he told a friend why he desired to create the first nativity scene in his town: ?I want to do something that will recall the memory of that child who was born in Bethlehem, to see with bodily eyes the inconveniences of his infancy, how he lay in the manger, and how the ox and ass stood by.?

St. Francis set up an empty manger (the feeding trough of farm animals which served as Jesus' crib) inside a cave, and even included a live ox and donkey beside the manger just as it was on that first Christmas night. Through these visual aids he wanted everyone to impress more deeply into their understanding how Christ came into the world in such poverty and simplicity. This was a typical perspective of St. Francis' unique charism of simple, poverty-centered spirituality.

St. Bonaventure, a Franciscan who was contemporary with St. Francis, has left us a complete account of the night of the first nativity scene:

"It happened in the third year before his death, that in order to excite the inhabitants of Grecio to commemorate the nativity of the Infant Jesus with great devotion, [St. Francis] determined to keep it with all possible solemnity; and lest he should be accused of lightness or novelty, he asked and obtained the permission of the sovereign Pontiff. Then he prepared a manger, and brought hay, and an ox and an ass to the place appointed. The brethren were summoned, the people ran together, the forest resounded with their voices, and that venerable night was made glorious by many and brilliant lights and sonorous psalms of praise."

What a beautiful scene! Each time we meet at our churches for a nativity pageant or live nativity scene, or around a nativity decoration for a time of prayer, we are participating in a centuries-old tradition. St. Bonaventure goes on to talk about St. Francis of Assisi's personal devotion to the Baby Jesus that sparked this event:

"The man of God [St. Francis] stood before the manger, full of devotion and piety, bathed in tears and radiant with joy; the Holy Gospel was chanted by Francis, the Levite of Christ. Then he preached to the people around the nativity of the poor King; and being unable to utter His name for the tenderness of His love, He called Him the Babe of Bethlehem."

The first nativity scene is also associated with an apparition of the Baby Jesus to those gathered with St. Francis. This must have been Jesus' way of giving his blessing to the nativity scene, which was a novelty in its time and had never been done before. Again, St. Bonaventure continues the story,

"A certain valiant and veracious soldier, Master John of Grecio, who, for the love of Christ, had left the warfare of this world, and become a dear friend of this holy man, affirmed that he beheld an Infant marvellously beautiful, sleeping in the manger, Whom the blessed Father Francis embraced with both his arms, as if he would awake Him from sleep. This vision of the devout soldier is credible, not only by reason of the sanctity of him that saw it, but by reason of the miracles which afterwards confirmed its truth. For example of Francis, if it be considered by the world, is doubtless sufficient to excite all hearts which are negligent in the faith of Christ; and the hay of that manger, being preserved by the people, miraculously cured all diseases of cattle, and many other pestilences; God thus in all things glorifying his servant, and witnessing to the great efficacy of his holy prayers by manifest prodigies and miracles."

Hopefully this story of the first nativity scene will inspire you to not look at your nativity set just as a pretty Christmas decoration, but as a tool of meditation on the humility, simplicity, and poverty of Christ that he took on, at the moment of his Incarnation, out of his boundless love for his lost sheep.