Learn More About the Miraculous Medal

THE MEANING OF THE MIRACULOUS MEDAL

The Front Side - On the front of the Miraculous Medal, Mary stands on a globe, representing the earth, with a crushed snake under her feet. This image represents Mary's role as "Queen of Heaven and Earth". The snake represents Satan, who was defeated by Mary's obedience to God. The rays coming from her hands symbolize the graces Mary gives to those who ask her. The year 1830 commemorates the year that the Blessed Mother appeared to St. Catherine Laboure.

The Reverse Side - On the reverse side of the Miraculous Medal is a cross and the letter "M". The cross represents Christ's sacrifice for our salvation, while the bar under the cross stands for the Earth. The "M" stands for "Mary" and her true devotion both to Jesus and to her children on Earth. The two hearts are the Most Sacred Heart of Jesus and the Immaculate Heart of Mary. The entire image is surrounded by twelve stars. The stars can represent both the twelve Apostles and the verse from the Book of Revelation, "a great sign appeared in heaven, a woman clothed with the sun, and the moon under her feet, and on her head a crown of 12 stars" (Revelation 12:1).

THE PROMISES OF THE MEDAL

During Our Lady's visit to Catherine on November 27,1830, rays of light flowed from rings on her fingers that were made of precious stones. However, some of the stones on the ring did not shine. Mary explained:

"These rays symbolize the graces I shed upon those who ask for them. The gems from which rays do not fall are the graces for which souls forget to ask."

Mary then spoke of the medal with these words:

"All who wear it will receive great graces; they should wear it around the neck. Graces will abound for persons who wear it with confidence."

The medal is simply a visible sign of the inner devotion the wearer has for Mary and  her Son, Jesus.

THE LIFE OF SAINT CATHERINE LABOURE

Catherine Laboure was was born on May 2, 1806. In her youth she was affectionately called Zoe, after the patron saint whose feast was celebrated the day she was born. Her parents were successful farmers in the village of Fain-les-moutiers in the Burgundy region of France. Catherine was one of 17 children and was the second daughter. When she was only nine years old, her mother died. From that time on Catherine adopted Mary as her mother. She declared, "Now, dear Blessed Mother, now you will be my Mother!" She received her First Holy Communion at age 12. From that time she was determined to pursue a vocation to the religious life, like her older sister, Marie Louise, who joined the Sisters of Charity. At the age of 22 Catherine asked her father for permission to begin a vocation, but he refused. It was not until January 22,1830 at the age of 24 that she finally entered religious life at the Hospice de la Charite in Chatillon-sur-Seine. After a postulancy of only three months she was sent to the Motherhouse of the Sisters of Charity in Paris.

Catherine had been at the motherhouse for only six months when the Blessed Mother appeared to her. At 11:30pm on July 18, 1830, Catherine was awakened when she heard a voice speaking to her. She saw a little boy with blue eyes and golden hair who she recognized as her guardian angel. He led her to the chapel where Our Lady appeared and sat in the Director's chair near the altar. She was wearing a white dress with a blue veil. At the urging of her angel, Catherine ran to Mary and knelt beside her. She rested her head in Mary's lap and looked up into her eyes as she listened to her speak. Mary told Catherine that God had a special job for her to do, and also warned of a great time of upheaval soon to occur in France. Catherine reported the apparition to the community's Confessor, Father Jean Marie Aladel. He advised her that the apparition was only a dream that she should try to forget. 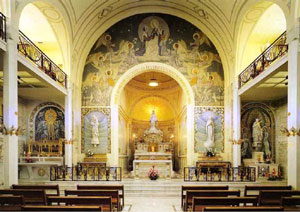 In the late afternoon of November 27, 1830, while at prayer with the other Sisters of Charity, Our Lady appeared again to Catherine. In this second apparition she first appeared in a pure white dress with a white veil. In her hands she held a golden ball topped with a cross. Her appearance soon changed as she revealed to Catherine the image of the medal she wanted to be made. This was the first time the world saw the words:

"O Mary, conceived without sin, pray for us who have recourse to thee."

At the end of her visit, Our Lady asked Catherine to keep the apparitions a secret from everyone except the Confessor for the community, Father Aladel. However, when Catherine went to him for a second time he again told her she had "too much imagination".

In December of 1830, Our Lady appeared to Catherine for the last time. This visit was similar to the visit in November, however this time Mary said: "You will not see me any more, but you will hear my voice during your prayers.

On January 30 1831, Catherine received the habit of the Daughters of Charity and was sent to work at Enghien Hospice in a suburb near Paris. In the Spring she again tried to convince Father Aladel to create Our Lady's medal, but he continued to refuse. In the autumn she asked for the third time, warning that "The Virgin is angry" with the delays. When Father Aladel finally told the Archbishop of Paris of Our Lady's request, he was told that the medal should be made immediately. Unfortunately, a deadly outbreak of cholera delayed the creation of the medal until May of 1832. The first order was for 20,000 medals and distribution began on June 30, 1832.

Originally, the name of the medal was "Medal of the Immaculate Conception", however stories of miracles related to the medal were reported almost immediately and the medal came to be called "Miraculous".

2. A woman who was pregnant contracted cholera and was thought close to death. After being given the medal she had a smooth delivery and both mother and baby were found to be healthy.

3. A child who had been unable to walk was healed when he wore the medal on the first day of a novena.

4. In 1842 a young man named Alphonse Tobie Ratisbonne experienced a conversion. From a Jewish family, Ratisbonne had a deep and very public hatred of Catholicism. During a trip in 1841, he unexpectedly spent some time in Rome and met Baron Bussieres, a newly converted Catholic. The two had an argument about the Faith and the Baron gave Ratisbonne a Miraculous Medal, challenging him to wear it and recite the prayer the Memorare. Shortly after, Our Lady appeared to Ratisbonne in exactly the same way as on the Miraculous Medal. He was converted immediately and was baptized that same night.

After only four years the number of medals that had been distributed numbered in the millions, and by Catherine's death in 1876 the number was in the billions.

In May 1835, Catherine pronounced her vows as a Sister of Charity of poverty, chastity, obedience, and stability. For more than forty years she continued to work at the hospice caring for the elderly men who were patients there. Despite the millions of medals that had been distributed around the world, no one except Father Aladel knew the name of the nun who had received the apparition of the Miraculous Medal. When Father Aladel died in 1865, Catherine was left with no one in whom she could confide.

In May 1876, Catherine was aware that the end of her life was near. She had been trying for many years to have a statue made of the Virgin holding the golden globe. Since Catherine could not ask Father Aladel for help, she asked Mary for advice on how to proceed. Forty-six years after the initial apparition, Mary gave Catherine permission to share her story. The statue was ordered in June and Catherine died, content that her work had been completed, on December 31, 1876. When she was beatified on May 28, 1933 her body was exhumed and found to be incorrupt. Catherine's body now rests in the Chapel of Our Lady of the Miraculous Medal where Mary appeared to her. Catherine was canonized by Pope Pius XII on July 27, 1947.

"You watch over the Church for you are its Mother. You watch over each of your Children. From God, you obtain for us, all graces that are symbolized by the rays of light which radiate from your open hands, and the only condition that you demand of us is that we approach with the confidence, the hardiness, and the simplicity of a child. And it is thus that you bring us before your Divine Son." - Pope John Paul II on his visit to the Chapel on May 31,1980.