O Divine Master,
Grant that I may not so much seek
To be consoled, as to console;
To be understood, as to understand;
To be loved as to love.

St. Francis of Assisi, the Patron Saint of Animals, is most often depicted with birds fluttering above his head and forest creatures rushing to greet him. But, these depictions do not adequately portray St. Francis the peacemaker.

St. Francis’ desire for peace was visible in the midst of the Crusades. He voyaged to the Muslim world as a peacemaker in 1219.  Contrary to this time, Francis believed in peace over violence. He engaged in peaceful dialogue with the Sultan himself, a daring feat that should have ended in his death. The sultan admired Francis’ enthusiasm and courage and listened respectfully. The Sultan agreed to peace and provided safe passage for St. Francis back to the Christian camp. St. Francis arrived home urging Christians to take inspirations from the Muslims, and live peacefully beside them.

Today we still hear St. Francis' message of peace. A famous prayer attributed to him is known as the "Prayer of St. Francis" or the "Peace Prayer". While the authorship of the prayer is still under question, the prayer holds true to the ideals of the Franciscan order he established. The Rule of St. Francis contains specific guidelines on how brothers should conduct themselves.  The Rule explicitly states:

“[brothers] are not to quarrel nor contend in words, nor are they to judge others, but they are to be meek, peaceable and modest, kind and humble, speaking uprightly to all, as is fitting.” (Chapter III).

Display this beautiful prayer in your home to be ever mindful of St. Francis and his continuing mission of peace. 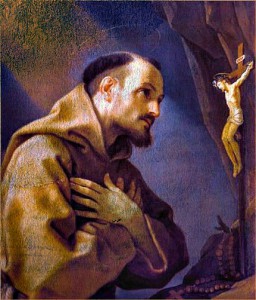