Wear a Symbol of Your Total Consecration to Jesus Through Mary

St. Louis de Montfort considered himself a "slave" to the Blessed Virgin Mary, and, as such, he faithfully wore chains on his arms and feet as a token of his dedication and love for her.

He strongly recommended, after his own example and that of many other saints, that those who complete the 33-day Total Consecration to Jesus through Mary and make the Act of Total Consecration should wear an outward sign as a reminder and expression of their "holy slavery" to Our Lady in the form of a chain around the wrist, neck, or ankle.  His words are excerpted below. 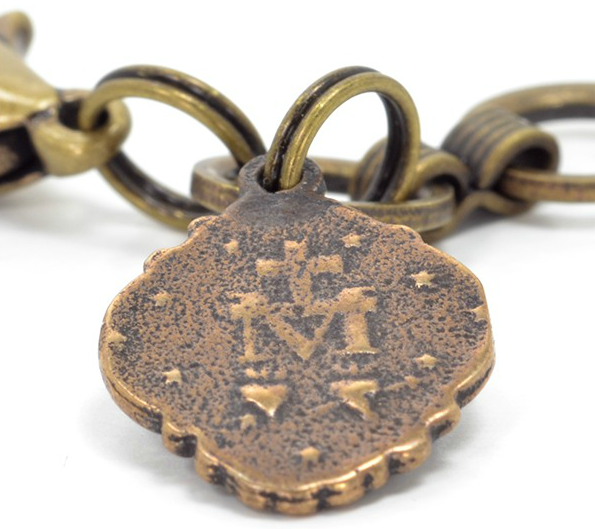 Four Options for Wearing a Chain

There are several ways you can wear such a chain. A few examples are below.

One, you can make your own.  You can buy several smallish chain links from the local hardware store and fastened them to the wrist with pliers, with no clasp, with the intention of never removing it. This is a rugged, inexpensive, and durable option.

Two, you can purchase a special, large chain-link Marian Consecration Bracelet in keeping with the spirit of holy slavery to the Blessed Virgin.

Four, you can choose to wear another kind of Marian medal associated with the feast day on which you chose to make your consecration, if one is available. You can find a selection here, and also use the search bar to locate the medal you’re looking for if it's not listed.  You can also choose to have the date of your consecration personalized on the back (Miraculous Medals do not allow for personalization as the design of the medal is double-sided).

The practice of wearing a chain around the wrist or neck as a sign of special devotion to Our Lady is described by St. Louis de Montfort in his classic work True Devotion to Mary, excerpted below:

THE WEARING OF LITTLE CHAINS

It is very praiseworthy and helpful for those who have become slaves of Jesus in Mary to wear, in token of their slavery of love, a little chain blessed with a special blessing.

It is perfectly true, these external tokens are not essential and may very well be dispensed with by those who have made this consecration. Nevertheless, I cannot help but give the warmest approval to those who wear them. They show they have shaken off the shameful chains of the slavery of the devil, in which original sin and perhaps actual sin had bound them, and have willingly taken upon themselves the glorious slavery of Jesus Christ. Like St. Paul, they glory in the chains they wear for Christ. For though these chains are made only of iron they are far more glorious and precious than all the gold ornaments worn by monarchs.

At one time, nothing was considered more contemptible than the Cross. Now this sacred wood has become the most glorious symbol of the Christian faith. Similarly, nothing was more ignoble in the sight of the ancients, and even today nothing is more degrading among unbelievers than the chains of Jesus Christ. But among Christians nothing is more glorious than these chains, because by them Christians are liberated and kept free from the ignoble shackles of sin and the devil.

Thus set free, we are bound to Jesus and Mary not by compulsion and force like galley-slaves, but by charity and love as children are to their parents. "I shall draw them to me by chains of love" said God Most High speaking through the prophet. Consequently, these chains are as strong as death, and in a way stronger than death, for those who wear them faithfully till the end of their life. For though death destroys and corrupts their body, it will not destroy the chains of their slavery, since these, being of metal, will not easily corrupt. It may be that on the day of their resurrection, that momentous day of final judgment, these chains, still clinging to their bones, will contribute to their glorification and be transformed into chains of light and splendour. Happy then, a thousand times happy, are the illustrious slaves of Jesus in Mary who bear their chains even to the grave.

Here are the reasons for wearing these chains:

(a) They remind a Christian of the promises of his baptism and the perfect renewal of these commitments made in his consecration. They remind him of his strict obligation to adhere faithfully to them. A man's actions are prompted more frequently by his senses than by pure faith and so he can easily forget his duties towards God if he has no external reminder of them. These little chains are a wonderful aid in recalling the bonds of sin and the slavery of the devil from which baptism has freed him. At the same time, they remind him of the dependence on Jesus promised at baptism and ratified when by consecration he renewed these promises. Why is it that so many Christians do not think of their baptismal vows and behave with as much licence as unbelievers who have promised nothing to God? One explanation is that they do not wear external sign to remind them of these vows.

(b) These chains prove they are not ashamed of being the servants and slaves of Jesus and that they reject the deadly bondage of the world, of sin and of the devil.

(c) They are a guarantee and protection against enslavement by sin and the devil. For we must of necessity choose to wear either the chains of sin and damnation or the chains of love and salvation.

Dear friend, break the chains of sin and of sinners, of the world and the worldly, of the devil and his satellites. "Cast their yoke of death far from us." To use the words of the Holy Spirit, let us put our feet into his glorious shackles and our neck into his chains. Let us bow down our shoulders in submission to the yoke of Wisdom incarnate, Jesus Christ, and let us not be upset by the burden of his chains. Notice how before saying these words the Holy Spirit prepares us to accept his serious advice, "Hearken, my son," he says, "receive a counsel of understanding and do not spurn this counsel of mine."

Allow me here, my dear friend, to join the Holy Spirit in giving you the same counsel, "These chains are the chains of salvation". As our Lord on the cross draws all men to himself, whether they will it or not, he will draw sinners by the fetters of their sins and submit them like galley-slaves and devils to his eternal anger and avenging justice. But he will draw the just, especially in these latter days, by the chains of love.

These loving slaves of Christ may wear their chains around the neck, on their arms, round the waist or round the ankles. Fr. Vincent Caraffa, seventh General of the Society of Jesus, who died a holy death in 1643, carried an iron band round his ankles as a symbol of his holy servitude and he used to say that his greatest regret was that he could not drag a chain around in public. Mother Agnes of Jesus, of whom we have already spoken, wore a chain around her waist. Others have worn it round the neck, in atonement for the pearl necklaces they wore in the world. Others have worn chains round their arms to remind them, as they worked with their hands, that they are the slaves of Jesus.