What do a lion, ox, eagle, and angel have in common? They’re all symbols of the Gospel writers!

The four Evangelists are often portrayed alongside a particular creature. What are these creatures, and what do they symbolize?

When you see the four Evangelists—Matthew, Mark, Luke, and John—depicted in art, one quick way to know who is who is to look at their symbols, which are frequently depicted with them.

You’ll see a man (usually portrayed as an angel), a lion, an ox, or an eagle. Sometimes artists utilize the symbols as stand-ins for the actual saints, so you’d need to know your symbology to figure out who is represented.

Let’s start by matching the right symbol with the right Evangelist:

The great Church Father St. Jerome, who lived in the 4th and 5th centuries, gave us the pairings as we now know them. St. Gregory the Great corroborated his interpretation.

The symbols themselves come from the book of Ezekiel, who had a vision of God in the midst of these four creatures. The Church Fathers interpreted this as a foreshadowing of the four Gospels.

We meet the four creatures again in the 4th chapter of St. John’s Apocalypse:

Matthew’s symbol is a man because he begins his Gospel with Christ’s human genealogy, focusing on Christ the Man.

Mark is represented by a lion because his Gospel starts off with a roar. Right away in the first chapter, we are confronted with the fiery words of St. John the Baptist, the “voice of one crying in the wilderness.”

Luke is accompanied by an ox, an animal of sacrifice. This is because the first event he recounts is the apparition of the Angel Gabriel to Zechariah, the father of St. John the Baptist. Zechariah, a priest, is offering sacrifice to God in the temple when St. Gabriel appears to announce the impending birth of St. John.

An eagle is the companion of St. John, because in his Gospel, St. John “soars” above earthly events to contemplate the Divinity of Christ. His narrative begins with these sublime words: “In the beginning was the Word, and the Word was with God, and the Word was God.”

The Gospels, given to us by God Himself through His Evangelists, are an endless spring for our thirsty souls. Each Gospel should be familiar reading to every Catholic. A beautiful leatherbound edition of them, complete with the four symbols imprinted in gold on the cover, is the perfect way to keep them handy. Order yours right here at The Catholic Company! 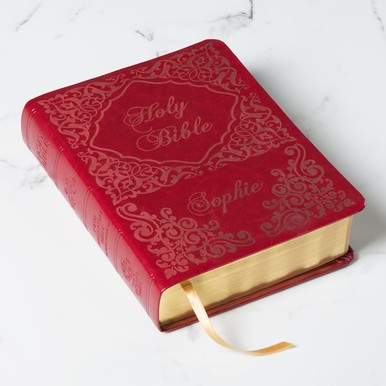