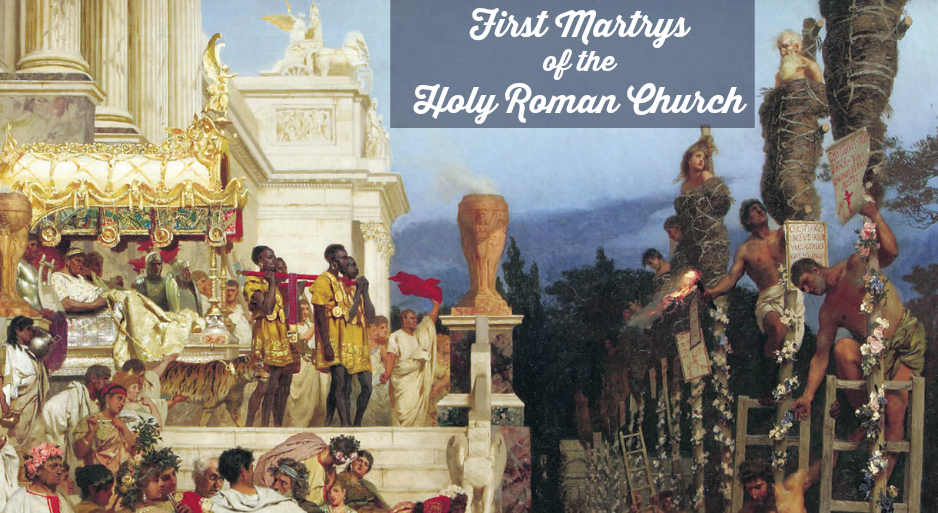 Like the martyrdom of the Apostles Saint Peter and Saint Paul (see previous post here),  a great number of Christians perished at the hands of Nero during the terrible persecution that lasted from the years 64-68 A.D.  This was the first major persecution of the newly founded Church at Rome. The holy men and women are also called the “Protomartyrs of Rome.” The historian Tacitus, in his said that a "great multitude" of Christians were put to death.

The Christian persecution began in the summer of 64 A.D., when a great fire blazed throughout Rome and destroyed much of the city.  The insane tyrant Nero was blamed by the citizenry for lighting the fire to satisfy his own twisted amusement.  To shift the blame from himself, Nero accused the Christians (who were already disliked) as the perpetrators.  The historian Tacitus describes the brutality suffered by these first Christian martyrs as a result of this accusation:

“Yet no human effort, no princely largess nor offerings to the gods could make that infamous rumor disappear that Nero had somehow ordered the ?re.  Therefore, in order to abolish that rumor, Nero falsely accused and executed with the most exquisite punishments those people called Christians, who were infamous for their abominations . . . Therefore, ?rst those were seized who admitted their faith, and then, using the information they provided, a vast multitude were convicted, . . .  And perishing they were additionally made into sports: they were killed by dogs by having the hides of beasts attached to them, or they were nailed to crosses or set a?ame, and, when the daylight passed away, they were used as nighttime lamps."    Tacitus (c. 55 -117 CE)

Some martyrs were burned as living torches in the Emporer's gardens, some crucified, others were fed to wild animals. These martyrs died even before Sts. Peter and Paul, and therefore it is said of them that they are the “disciples of the Apostles . . . whom the Holy Roman church sent to their Lord before the Apostles’ death.”

It was a terrible time of suffering, but also a time that purified and strengthened the Church through the power of the Holy Spirit. God used the sacrifice of these holy men and women, who died like their savior Jesus Christ, to lay the indestructible foundations of His Church; Christ promised that the gates of hell would never prevail against it. People of all backgrounds, from all countries, from all stations of life, were willing to die gruesome deaths for the sake of one man, Jesus Christ.

The brave and holy manner in which the martyrs faced their tormentors became inspiration for all.  Many became Christians after witnessing so many men and women lay down their lives (sometimes willingly) only to be murdered in the most atrocious and diabolical manner—concluding that the Gospel of Christ must be the Truth.  Thus, instead of weakening the Christian faith, these persecutions only caused it to strengthen and spread exponentially.

On this feast day of the First Martyrs of the Church at Rome, let us remember that no matter what our sufferings, when united to Christ these sufferings will always be used by God to build up the Church and bring salvation to the world. 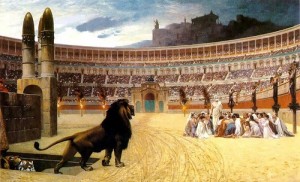