We are all going to die.

Every single one of us.

And, over time, so will all those whom we know and love.

This reality can strike fear in the heart of even the most faithful Christian. Yet, if we are pursuing holiness and conformity to God’s will, we need not fear the future held in store for us: it is Heaven, and union with the Lord who is the source of our joy.

Christ has already died for each of us, and if we have been baptized, then we have died to the world through our baptism in Him. If we understand and believe these truths of our Faith, we can live freely in the light of His love for us. We can spend our lives seeking His will, and aspiring only for that to be done. We can let go of our fear of death and embrace the unique mission He asks of us in our finite time on earth.

Contemplating the Reality of Death

“And do not be afraid of those who kill the body but cannot kill the soul; rather, be afraid of the one who can destroy both soul and body in Gehenna. Are not two sparrows sold for a small coin? Yet not one of them falls to the ground without your Father’s knowledge. Even all the hairs of your head are counted. So do not be afraid; you are worth more than many sparrows.” - Matthew 10: 28-31

Fear is a natural part of our humanity, but it is not the better part. The better part is to fix our gaze confidently on God, who desires all to be saved.

Instead of focusing on the unfamiliar, uncontrollable aspect of bodily death, God calls us to rejoice in the gift of our immortal souls, and to embrace the hope and the promise implicit in bodily death.

This is a grace of the practice of “Memento mori,” which is Latin for “Remember your death.” 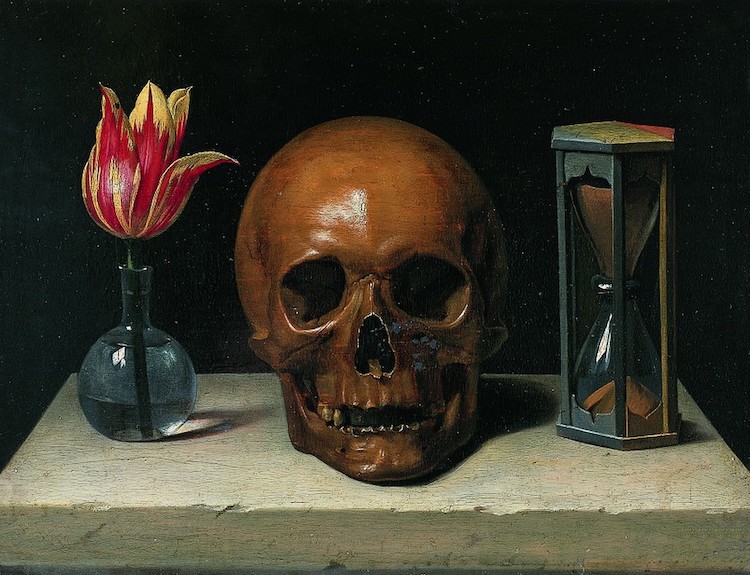 The phrase and discipline known as memento mori has recently resurfaced and experienced renewed popularity, thanks to the writing of a young nun, Sr. Teresa Aletheia Noble of the Daughters of St. Paul. Sr. Teresa Aletheia’s apostolate has introduced this ancient phrase and its practice to a new generation of Catholic Christians. She realized that though the practice of memento mori may be ancient, the concept is relevant in all times and places.

An Ancient Concept for Our Modern Day

In antiquity, Plato and Socrates wrote of the importance of remembering death, but it was the early Christians who introduced the practice and concept of memento mori to the faithful. In the middle ages, memento mori was not only an exercise in meditation; it also took the form of tangible expression. Shakespeare used the term in his play King Henry IV. Kings used these words for their seals and wore them on signet rings. Whole genres of art, jewelry and other “mementos” took on this theme to prompt the viewer to memento mori. We even see its liturgical expression in the ashes we receive on Ash Wednesday: “Remember that you are dust, and to dust you shall return.”

Unfortunately, in our culture today, people want to deny death’s call and live forever, looking young and lovely all the while! How easy it is to forget time, and, as we rush through our busy days, to forget even death. So many medical advancements, pharmaceutical breakthroughs, surgical procedures, and technological developments stem from our desire to push back death and reject its relevance to us. We have perpetuated this false reality because contemplating our deaths has become too morbid for our delicate, modern sensibilities.

This was not always the case. Ancient civilizations and past cultures were keenly aware of their own mortality. There was no escaping it, because average lifespans were significantly shorter than ours are today. Modern medicine did not yet exist. Disease was rampant. Extreme violence was commonplace. Death confronted everyone in the community directly and continuously.

Most of us are fortunate not to encounter death constantly as in times of old. Yet distancing ourselves from death is not entirely healthy either. Memento mori makes us just uncomfortable enough to rouse and challenge us to consider our spiritual priorities. It is also meant to be a healthy expression of Christian hope.

Memento mori reminds us that this life is fleeting. Every earthly glory is fragile, and temporal things are, in the end, empty and meaningless. Our home in heaven awaits, and we must seek to prepare ourselves! Memento mori encourages spiritual and moral instruction. By reflecting on our own deaths, we can embrace this essential truth:

We exist only to know, love and serve our God, and to make Him known in the world, so as to one day be happy with Him in heaven. Should that seem morbid and frightening?

This perspective is neither ignorant nor morbid. To find death distressing is not the point. The point is to find our life in Christ.

“I have been crucified with Christ; yet I live, no longer I, but Christ lives in me; insofar as I now live in the flesh, I live by faith in the Son of God who has loved me and given himself up for me.” -St. Paul, in his letter to the Galatians, 2:19-20

Pondering our death and eternal life can and should change us for the better. What if instead of pushing this unpleasant thought from our minds, we allowed it to motivate us to grow in virtue and holiness? To love God more fervently? To extend ourselves in self-sacrifice and charity? To aspire to love others as Christ loved us all? Setting aside worldly concerns, we are invited to seek the spiritual without delay.

Thoughtful Inspiration Across the Centuries

The saints knew and lived memento mori well. Their eyes were fixed on Christ, who was the very source of their love and the reason for their lives. They were not bound to this world. Far from it, they desired nothing more than to leave it, so as to be in union with Him. To them, “Memento mori!” was not a distressing call. It was the joyful anticipation of their true life in Him.

Sts. Jerome, Francis, Gerard, and Mary Magdalene are among the saints commonly depicted with skulls in religious art. St. Elizabeth of Hungary used a simple coffin to contain all the religious goods she gathered and gave to the poor so she could remember that earthly things were meaningless. Pope Alexander VIII had the great artist Bernini carve a small marble coffin he kept upon his desk as a reminder that at the end of his life he would be held accountable to God. All of these are tangible expressions of memento mori.

In the Capela dos Ossos (Chapel of Bones) in Évora, Portugal, bones and skulls adorn the walls and columns, and even form the mortar. The white brick roof is decorated with images and themes associated with death. It is said that in construction, the three monks who designed and helped build the site had the goal of bringing their brothers to the contemplation of death and the transitory nature of life in this world. Carved above the door is the exhortation:

“We bones that are here await yours.”

Similarly, the Capuchin Crypt in Rome is said to contain the bones of 3,700 friars as a silent and powerful reminder of memento mori. All of these things may seem morbid by modern standards, yet they are powerful examples of this ancient but timeless call to reflection.

Every Day Is Precious

To take memento mori to heart is to remember our own deaths, and live each day such that we are prepared, and even longing, to see the face of God. How powerful to ready ourselves in the here and now, which we know is fleeting, for the gift of eternity with Christ Jesus.

Recently one of my children, who has been very ill for several years, told me she had been thinking about death. She asked me this question: “Have you ever realized that every year you are alive, you pass the exact day of your death, again and again, until, one year, it is your very last day on earth?”

What a striking truth from such a young soul! This reflection should fill us with gratitude for each new day which God, in His goodness, grants to us.

This life is precious. Every moment is gift and mystery. One day, at the hand of death, we will look upon the One Whom We Know Loves Us. His kingdom and our relationship with Him will endure into eternity, when we have left all we know of this world behind us.

So, until that day, memento mori! 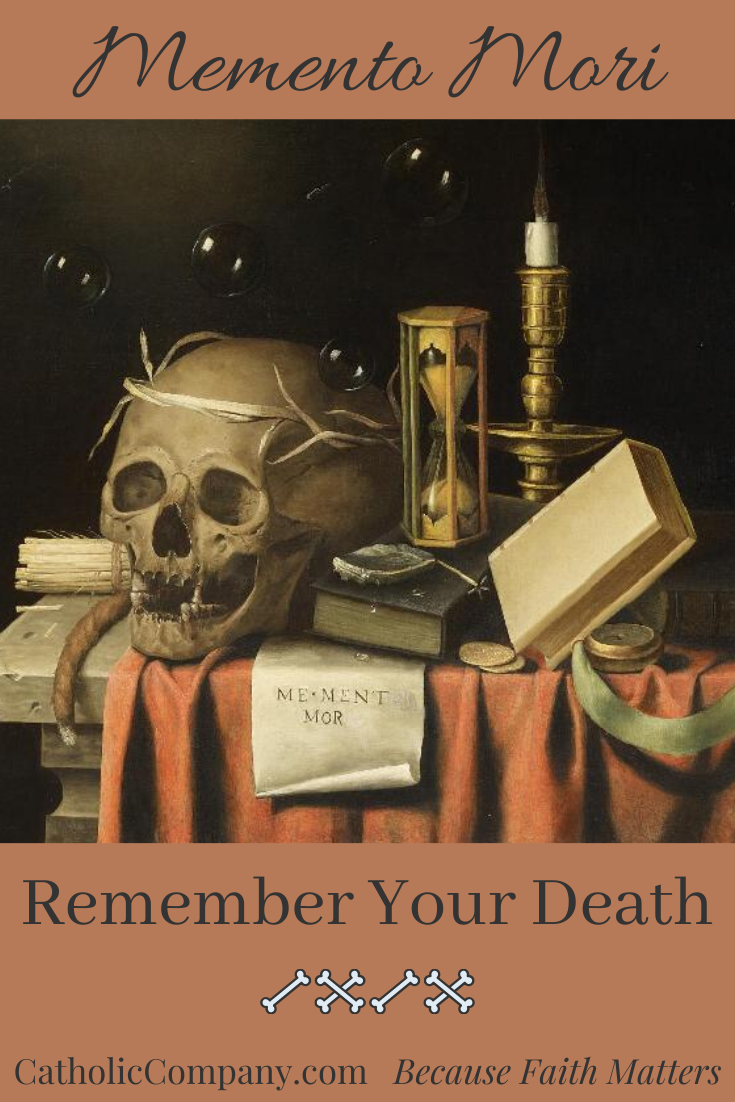