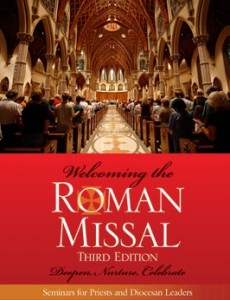 seems to be rather sporadic all across the board. Some seem to have jumped on right away and almost have the roman missal third edition memorized and perfected. Others, such as myself, struggle very much with the new roman missal even with the pamphlets and laminated flyers which are very helpful.

Altogether though, it seems that most are at least trying to learn the roman missal third edition. After the introduction of the new roman missal, many newspapers had articles on the missal and its reception by the Catholic community. The Charlotte Observer, the main newspaper of Charlotte, had an article on the reception which was rather bias. Most of the interviews included in the article were from people whom were completely opposed to the roman missal third edition. I hope that that is not an accurate representation of the Catholic community but rather a bias of the journalist. What do you think?

One of the biggest surprises that has come out of the new roman missal for me is dialogue said by the priest. Prior to the introduction of the roman missal third edition I already knew from different seminars, articles, etc. that many responses of the community to the priest were being changed but few if any of these articles focused let alone mentioned the changes in what is said by the priest. Therefore, those changes caught me off guard and caught my attention which has resulted in it being much easier for me to focus on the words of the Mass. Many others have stated that they have felt the same way which I think is a great thing to come out of having a new roman missal.