When we read the Bible at home, or listen to the readings at the mass, it's all too easy to simply read the story from beginning to end, think for a few moments, and then move onto the next chapter. Or perhaps we zone out, only to be startled back to attention when the reader says, "The word of the Lord".

However, if we put a bit more effort into reading the Bible like a true story, one with mysteries, adventures, revelations, patterns, and those countless tiny yet delightful details scattered throughout our favorite books, we will inevitably be struck by the depth of the what we discover.

Some time ago I had the gift of being able to read the story of Christ’s appearance to the Apostles in the upper room in this way. As my reading and reflecting progressed, at some point it became a time of deep prayer and revelation. Those revelations have stuck with me through several years now.

The Story From Our Catechesis Days

Most of us know the general story of Christ's repeated appearances to the apostles in the upper room, firstly without the “Doubting Thomas,” and a second time when he is present.

In the evening of that same day, the first day of the week, the doors were closed in the room where the disciples were, for fear of the Jews. Jesus came and stood among them. He said to them, 'Peace be with you.” When he had said this, he showed them his hands and his side.… The other disciples said to [Thomas] 'We have seen the Lord,' but he answered, 'Unless I can see the holes that the nails made in his hands and can put my finger into the holes they made, and unless I can put my hand into his side, I refuse to believe.' (John 20:19-20, 25) 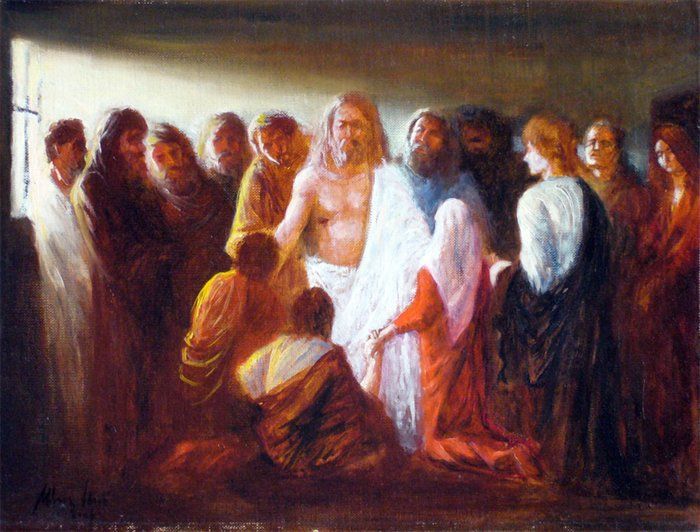 I think many of us automatically “tsk, tsk” Thomas for refusing to believe the other Apostles and for daring to ask to touch the wounds of the Word Made Flesh.

But I've come to believe that Thomas gets a bad rap unnecessarily. There’s much more to this story than meets the eye!

Where In The World Was Thomas?!

One of the small yet significant details that struck me about this passage is the simple, unassuming phrase "Thomas was not with them.”

All the Apostles, grown men—some of them burly fishermen—were hiding behind a locked door “for fear of the Jews.” But Thomas wasn’t there.

Perhaps he "drew the short straw" to go get food for the hungry, restless crew of Apostles, or he snuck out to see his family and tell them what he knew of the past days’ events, or he just had to get out of that stuffy room with 11 other anxious men. In any case, when Jesus came, Thomas wasn't hiding out in the upper room. He faced fear while the others cowered.

1) His brother Apostles had all gone insane, or

2) That Christ had allowed Thomas to miss out seeing him? In Thomas's shoes, I would have found that incredibly unfair. After all, he wasn’t afraid to go out and risk the danger of the city and the possibility of being recognized as one of Christ’s closest followers. and yet Thomas was the one to miss out on encountering his beloved Master and Teacher.

At this particular moment, Thomas probably would have concurred with the snappy words that St. Teresa of Avila spoke to Our Lord: “If this is how you treat your friends, it's no wonder you have so few!”

In the face of these realities, Thomas’s response to the Apostles seems much more realistic and relatable: “Unless I can see the holes that the nails made in his hands and can put my finger into the holes they made, and unless I can put my hand into his side, I refuse to believe.”

A Man of Bold Statements

These daring remarks by Thomas can also be taken at face value, or they can be unpacked further. You see, this boldness of Thomas isn’t an isolated incident. If we go back to an earlier passage in the Gospel of John, in which the disciples fear for Jesus’s safety when He wants to go see Lazarus in Judea, Thomas tells the others, “Let us also go to die with him” (Jn. 11:16).

Thomas wasn't afraid to proclaim his true thoughts. In this earlier instance we see a bold, confident boast—and then in the upper room a bold and bitter doubt.

In the wake of the Resurrection, Christ takes this fearless man and gives him the opportunity to turn that bitter disappointment into a beautiful prayer of adoration.

From Bitter Doubt to Intimate Adoration

When Christ appears to the Apostles a second time, Thomas is there. While Christ does give the general admonition, “Blessed are those who have not seen and yet believe,” He doesn’t punish Thomas for his doubt and desire. (Jn. 20:29)

Instead Christ uses this weakness, and this poignant desire, to create an intimate moment with Thomas. In his mercy, Jesus gives the bitter yet honest Thomas precisely what he asked for:

He spoke to Thomas, 'Put your finger here; look, here are my hands. Give me your hand; put it into my side. Do not be unbelieving any more but believe.' Thomas replied, 'My Lord and my God!' (Jn 20:27-28) 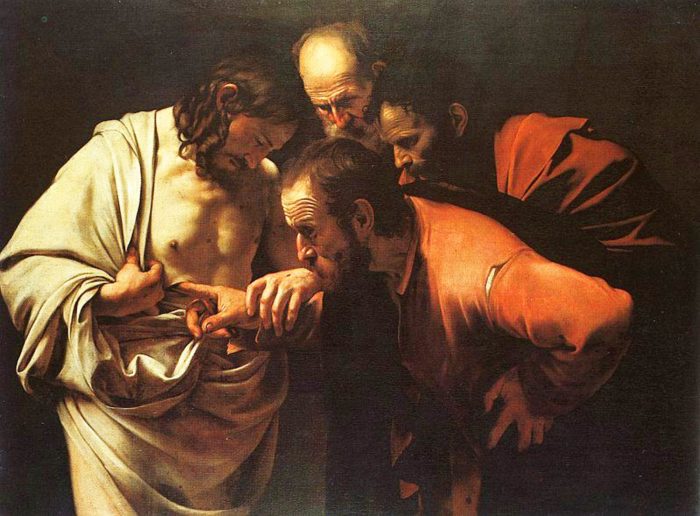 "The Incredulity of St. Thomas" by Caravaggio

The Apostle of Divine Mercy

I always thought that reading Christ’s appearance to the Apostles on Divine Mercy Sunday was simply for liturgical reasons. But now I see that this passage also perfectly fits because Thomas experiences God’s Mercy in a very, very real way.

“I do not want to punish mankind, but I desire to heal it, pressing it to My merciful Heart.”

“Souls that make an appeal to My mercy delight Me. To such souls I grant even more graces than they ask. I cannot punish even the greatest sinner if he makes an appeal to My compassion, but on the contrary, I justify him in My unfathomable and inscrutable mercy.”

Thomas, though he doubted, was not afraid to make an appeal to Christ and acknowledge the littleness of his trust in God. As Christ told St. Faustina, He cannot resist the soul who appeals to Divine Mercy. 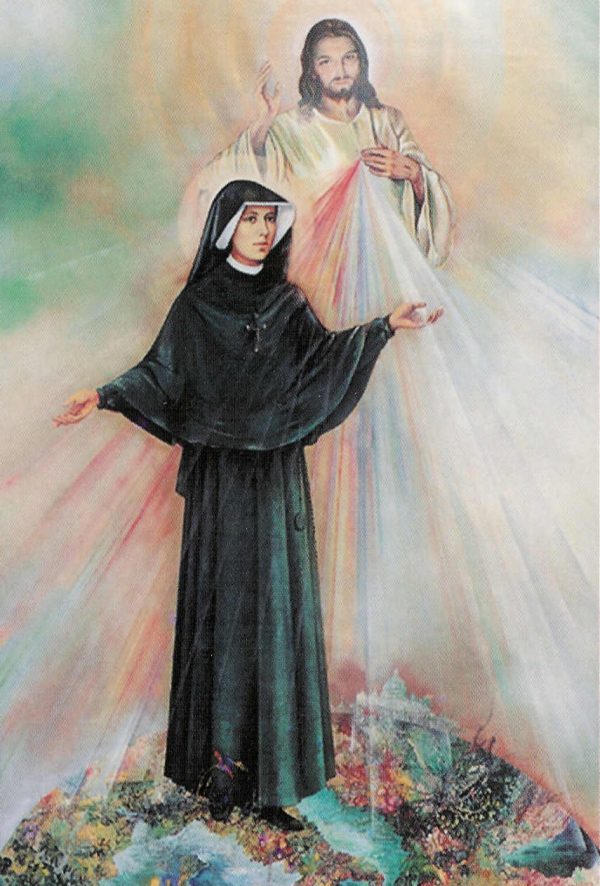 Therefore, Christ takes Thomas’s weak faith and gives Him a tender moment beyond his wildest hopes. Thomas probably didn’t think he would ACTUALLY get to touch the wounds of his Lord. His plea was simply a cry of frustration and doubt and desire.

Christ allowed Thomas to actually touch His Sacred Heart, to actually place his hand where the Fountain of Mercy flows out. This prompts a beautiful act of praise, the one which many people privately repeat during the Consecration of the Host at Mass: “My Lord and My God.”

I’ve used the term “Apostle of Divine Mercy” several times now, and I like it more each time I use it. I think it’s a much more accurate and thoughtful title than “Doubting Thomas.” No one wants to be famous for doubting. But I sure wouldn’t mind being called an Apostle of Divine Mercy, up there with such promoters of mercy as St. Faustina and Pope St. John Paul II!

As the Feast of Divine Mercy approaches, let us ask for this humbled saint’s intercession, so that we will turn our doubts and fears into offerings to the Merciful Heart of God.

St. Thomas, Apostle of Divine Mercy, pray for us!

This article has been updated and was originally published in April 2018. All rights reserved.