Truth is far more romantic than fiction, and all the best stories that you wish were real are not as bewildering as the histories written by the hand of God.

The life of Saint Clare of Assisi doesn’t need to be embellished.

Chiara Offreduccio was born on July 16, 1194, to a wealthy noble family. Her mother was already known for her deep piety. She named her eldest daughter Clare (Chiara) which means “light” in Italian.

Even as a young girl, Clare was unusually devout. Not only was she was outwardly beautiful, with a head of golden hair—she was also inwardly lovely. Clare was deeply prayerful, and practiced a life of very real, but hidden, mortification. Soon she was free of any attachment to a spirit of worldliness.

Clare Elopes with Her Heavenly Bridegroom

Around this time, her family would have expected her to marry well; after all, she was the eldest daughter of the Count of Sasso-Rasso. But how could they have known that a vivacious, passionate lover of Christ named Francis would preach the Lenten service at San Giorgio Church in Assisi? And could they have seen how his words lit a fire in the heart of their daughter?

Later, accompanied only by a gentlewoman from her household whom she trusted, Clare secretly sought out the little poor man in the ragged tunic and asked him to tell her how she might live the Gospel as he had preached it. Saint Francis saw in her the divine plan of the Holy Redeemer and assured her that he would help her to follow Christ.

On March 20, 1212, just eighteen years old, Clare clothed herself in all the splendor of her rank, and quietly ran away from home, aided by her Aunt Bianca and another woman from her househould. She left as a bride, going to wed her Heavenly Bridegroom, Jesus Christ.

Received by Francis and his friars at the Portiuncula, she knelt before him, laid aside her fine jewels, and had her hair shorn by the hand of the Little Poor Man. Her golden locks fell to the ground. She exchanged her sumptuous dress for a rough tunic and a humble veil. Then Saint Francis placed her with some Benedictine nuns for safekeeping. 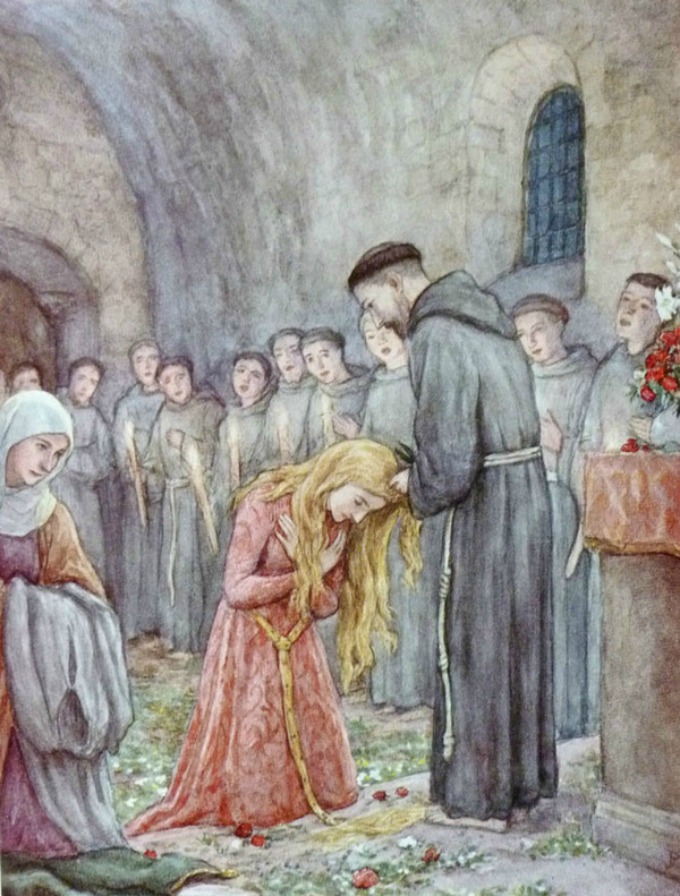 But Clare’s father found out what had happened and where she was. Understandably outraged, he came and tried to bring her home by force. Clare fought hard not to be removed—so hard that she clung to the altar clothes in the chapel, half-pulling them off in her determination. Finally, as a last resort, she pulled her veil off and showed her father her shorn head. It seems that this, finally, convinced the family that she was in earnest. They had to leave her where she was.

The Founding of the Poor Clares

Eventually, Clare was helped by Francis to establish a community of women who also desired to leave everything for Christ and live out the Gospel in a profound way. They were first called the Poor Ladies, but were later re-named the "Poor Clares," in honor of their foundress.

They lived a life of prayer, sacrifice, poverty, and humility. They wore rough clothing and went barefoot. They ate no meat, so that they might live a continual fast. They owned nothing, and lived entirely on what others chose to give them. And their lives were filled with joy and peace, even in the midst of suffering. 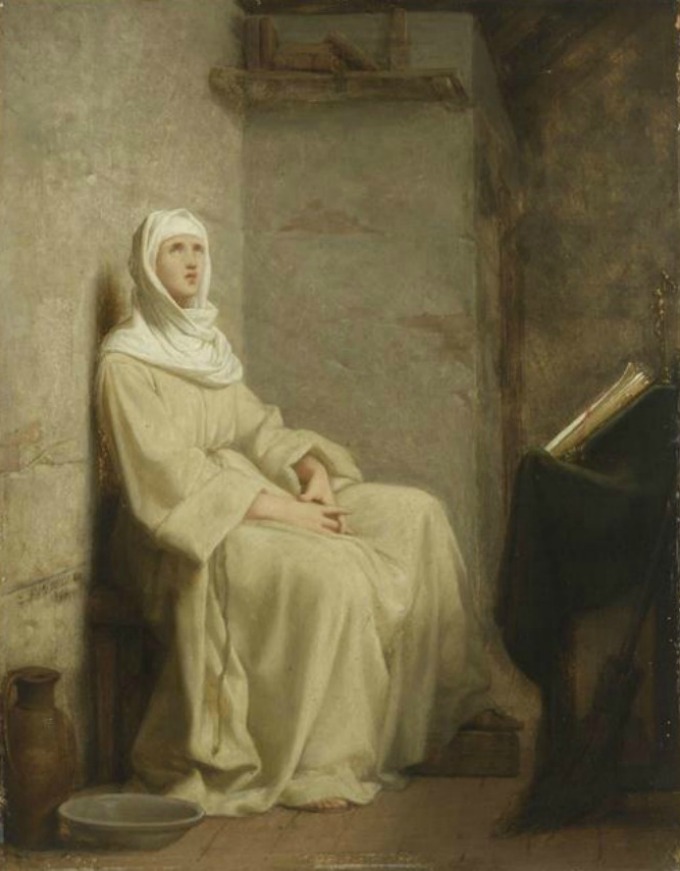 Clare herself set the greatest example of humility, even when she had been made abbess. She washed and kissed the feet of her sisters when they returned sore and weary from begging. She was the first to rise and ring the bell for prayer in the morning. When she came away from prayer, her face was radiant with a heavenly light.

Of Jesus she said to her sisters, “Love Him totally, Who gave Himself totally for your love.”

Her life was a shining example of these words.

Saint Clare and the Saracens

You may have noticed that most images of Saint Clare depict her with a monstrance in her hands. This comes from an event that took place in 1244. The following account tells us what happened:

“In 1244, Emperor Frederick II, then at war with the Pope, was ravaging the valley of Spoleto, which was part of the patrimony of the Holy See. He employed many Saracens in his army, and a troop of these infidels came in a body to plunder Assisi. St. Damien's church, standing outside the city walls, was one of the first objectives. While the marauders were scaling the convent walls, Clare, ill as she was, had herself carried out to the gate and there the Sacrament was set up in sight of the enemy. Prostrating herself before it, she prayed aloud: ‘Does it please Thee, O God, to deliver into the hands of these beasts the defenseless children whom I have nourished with Thy love? I beseech Thee, good Lord, protect these whom now I am not able to protect.’ Whereupon she heard a voice like the voice of a little child saying, ‘I will have them always in My care.’ She prayed again, for the city, and again the voice came, reassuring her. She then turned to the trembling nuns and said, ‘Have no fear, little daughters; trust in Jesus.’ At this, a sudden terror seized their assailants and they fled in haste.” 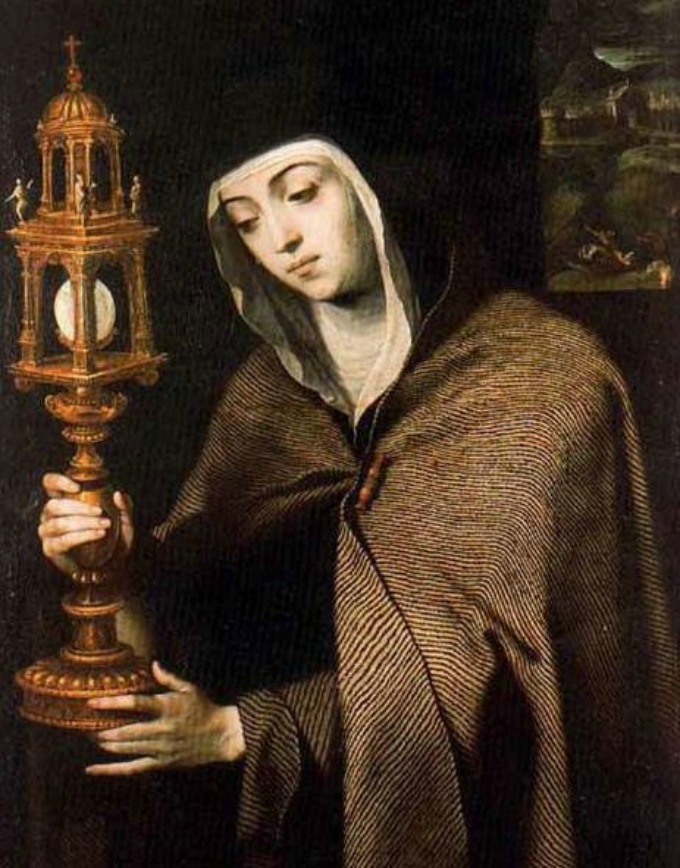 The Humble Yet Miraculous Life of Clare

Clare suffered greatly and was very ill for most of her last years. it seems that, although she was gentle and moderate regarding her sisters’ austerities, she lived a very rigorous penance out of her deep love for Christ which took a toll on her body.

Once, when she so ill that she was too weak even to leave her bed and attend Mass, she was able to participate in the very Mass she could not attend when it was made miraculously visible on the wall of her cell. This is why she is the patron saint of T.V.

When she died, surrounded by the community who loved her, she radiated such holiness that the Pope (who knew her holiness well) wanted to canonize her immediately. This was unheard of at such a time, and he was advised to wait. Still, the Lady Clare would be canonized just two years later. 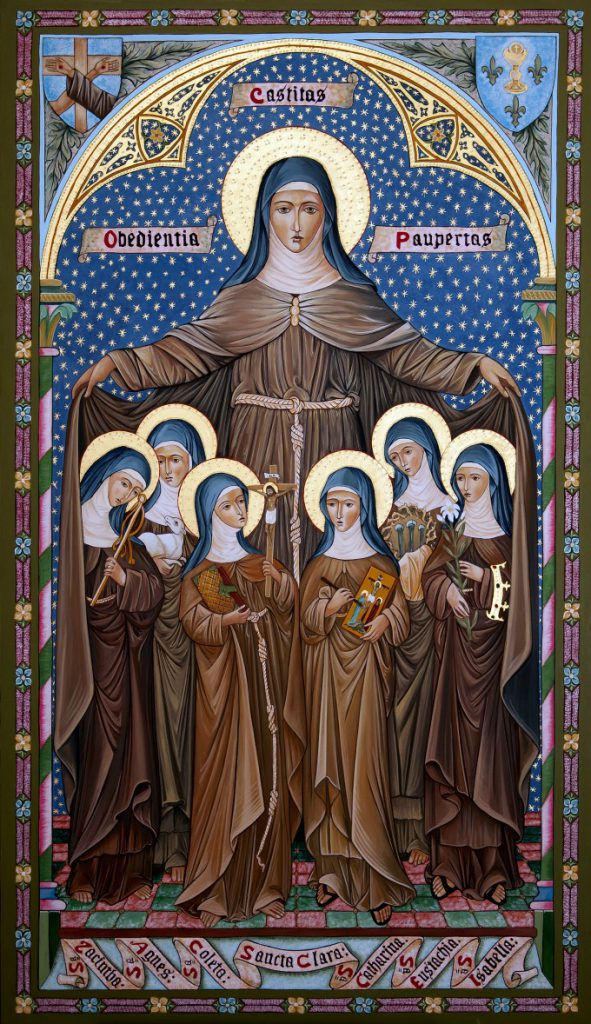 Many holy women, such as Saint Colette, imitated closely their foundress, Saint Clare

There are numerous Poor Clare saints who have walked in her footsteps, giving us further examples of holiness. Saint Colette, who helped reform the order when this was needed in 1410, is one of them.

Her remains are kept beneath a figure made in her likeness at the Basilica of Saint Clare in Assisi. Her shorn hair, as golden as ever, is also still carefully preserved in a reliquary.

Clare, a courageous woman whose heart was fearless and selfless, is said to have been the one who most perfectly lived the ideals of Saint Francis.

Her light, which burns for Christ and His Church, still flickers around the world in the lives of the women who live a heroic yet hidden life of prayer for others.

Are you devoted to Saint Clare?

Does her example give you the courage to follow the call of Christ? 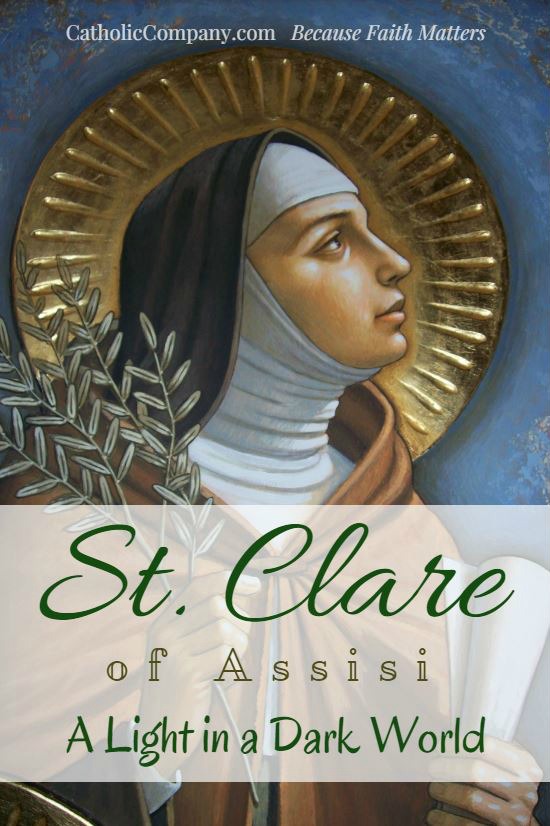