Our age is an age of absent fathers. Both spiritual fathers and biological fathers have abandoned their responsibilities. Many have been told their role is not important.

Countless men don’t know how to be good dads because they had troubled relationships with their own fathers. And many have had no father in their life at all, not even a father figure.

But there is hope.

We are not the only generation that has suffered in this way. God hears the cries of fatherless souls and sends healing and grace through men that reflect His divine fatherhood. Pope Saint John Paul II is an example of an incredible spiritual father.

So is St. John Bosco.

In our day and age, we need St. Bosco’s intercession more than ever. To understand why, let’s re-discover his amazing story.

St. John Bosco (1815–1888) was born in Italy to a poor family that worked as farmhands. His father died when he was only two years old. Although he had a good mother who devoted herself to raising him in the Catholic Faith, his father’s absence was a terrible suffering for him.

The pain of this absence gave John Bosco a profound compassion for struggling youth, especially those who were orphaned or alone. It was this compassion that guided him to his calling as a priest, teacher, and surrogate father to abandoned and orphaned children.

When he was nine years old, John Bosco had a prophetic dream. He saw many young boys beating one another, blaspheming, and acting out all sorts of disturbing cruelty and violence. In his dream, young Bosco tried to stop the terrible fighting, but ended up in the middle of the fight himself, swinging his fists—no better than the others.

Then a man appeared. He was beautiful, his face shone brightly, and he interrupted the fight, saying:

“It is not with blows, but with gentleness and charity that you will make them friends. Begin immediately to instruct them on the ugliness of sin and the reward of virtue.”

John told the radiant man that he could not influence such a great number of violent boys. Then he asked the man who he was. Rather than answering directly, the man replied that he would give him a teacher to help him become truly wise. Then he presented a beautiful woman to young Bosco.

“I am her son...Ask my Mother what my name is,” said the man in the dream.

The beautiful man and woman were Jesus and Mary. The Mother of God took Bosco’s hand, and showed him another vision. The violent children he had seen were gone—in their place was a multitude of wild beasts. Then these beasts were transformed into frolicking lambs. 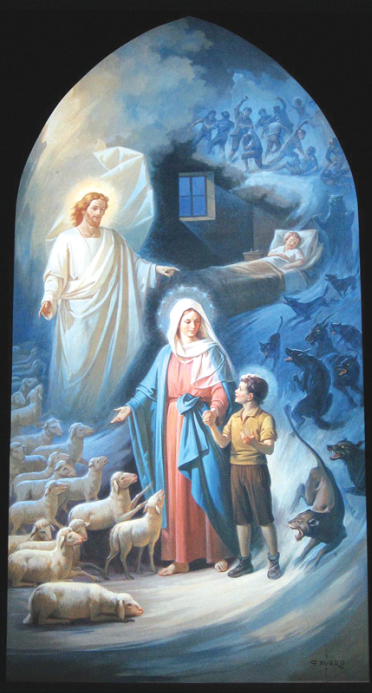 The Blessed Mother told him:

“This is your work. What you will see happening to these wild animals is what you must do for my children.”

Immediately after this dream, nine-year-old Bosco began to devote himself to entertaining other young people through games, work, and religious stories that educated them. He learned from street magicians and became very adept at “magic” tricks in order to entertain his peers and draw them away from trouble. Young Bosco would begin his entertainment with a prayer (such as the rosary) and even some preaching! 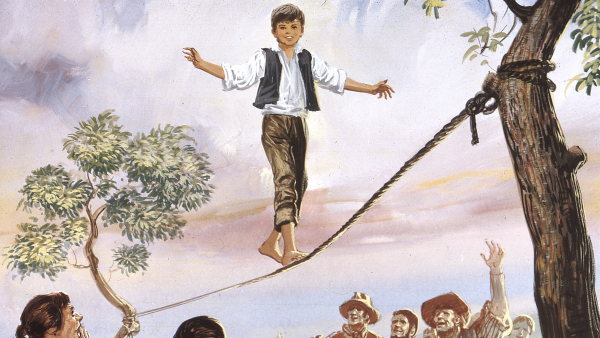 He was living in the countryside of northern Italy during the difficult social and economic time of the Napolionic wars. Tens of thousands of Italian men had lost their lives, leaving their families impoverished and alone. Their orphaned children had no choice but to wander the country in search of work in order to survive. It was a lonely and dangerous life for orphans. Many times it led to vagrancy, street gangs, or life in prison.

But the young John Bosco would place himself in the midst of the roughest, most violent boy gangs. He had a gentle approach and entrusted everything to Our Lady under the title Mary, Help of Christians. When he was present, the boys did not fight, but got along together.

His poor mother worried about his safety when he entered rough areas and surrounded himself with dangerous companions. Several times she asked him to discontinue such ventures. “Why are you doing this?” she exclaimed.

He told her: “Without me, they cannot get along, but with me, they do.”

St. John Bosco gave his life to Our Lady under the title Mary, Help of Christians, praying to her and referencing her by this title. He became a priest and teacher, fulfilling the prophecy of his childhood dream. He was affectionately known as Don (“Father”) Bosco.

Don Bosco developed a method of education known as the Preventative System. Through this faith- and value-based system, he led the most impoverished and difficult young men to Christ by means of his educational style and pastoral care. He based his teaching system on reason, religion, and loving kindness. His goal was to prevent the need for punishment by establishing a safe and protective environment where youth received love, education, and positive influence. 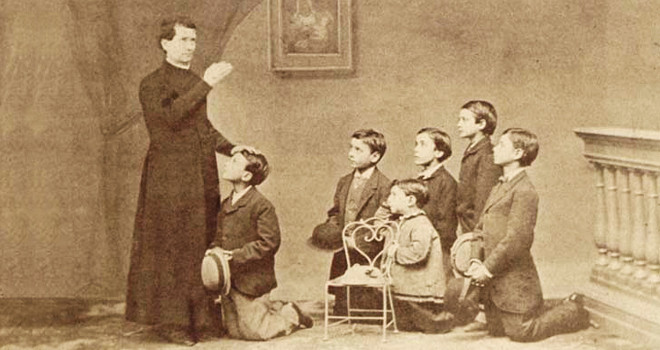 Don Bosco chose to live life on the streets like the children he served. His first work was done in what he called his Oratory which was not so much a specific place as it was a time and event to which boys came for breakfast, catechesis, worship, and play on Sundays. He gathered them in open spaces, vacant lots, churches, and other areas. Here they would play with him and learn the faith simultaneously.

Eventually his work expanded to include daily meals, care, and lessons. He saw the need to shelter the boys and built a boarding house that became both shelter and home. He taught the younger boys and found ways for the older ones to learn trades. He required them to participate in community service, and emphasized Catholic formation.

Over time, Don Bosco’s work made it possible to build more of these homes for boys in France, Spain, Argentina and elsewhere. He drew members of his best youth to establish the Society of St. Francis de Sales (Salesians) for young men and the Institute of the Daughters of Mary Help of Christians for young women. He also created the Salesian Cooperators—laypersons devoted to partnering with him to sustain his educational mission and methods with impoverished and at-risk youth. 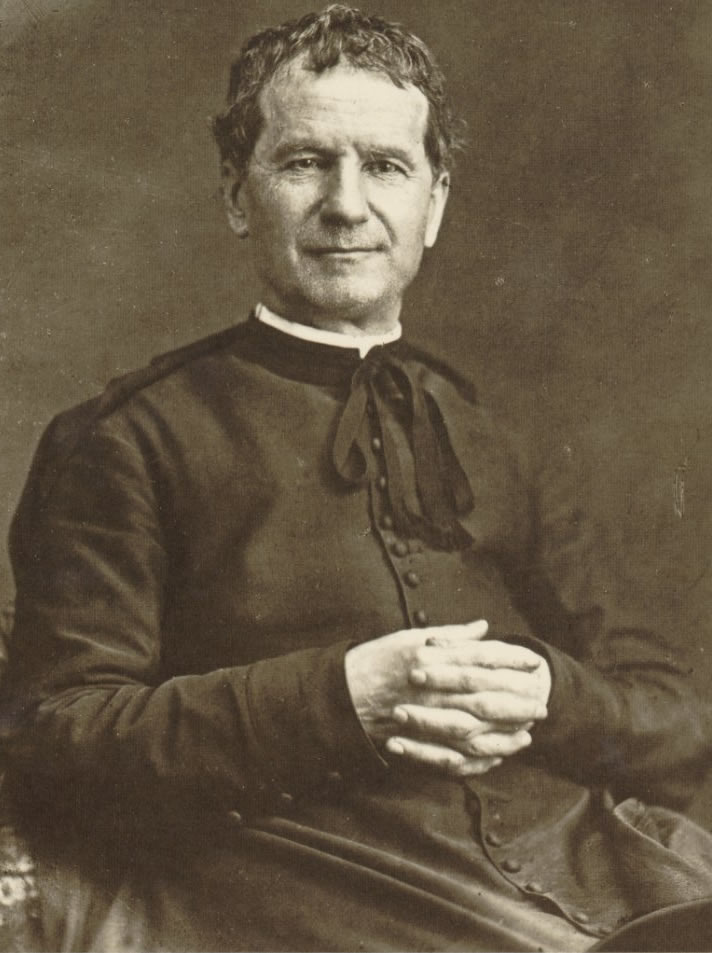 Due to his unlimited confidence in Mary, his interior union with God, and his passion for rescuing and educating abandoned children and young offenders, St. John Bosco changed the lives of hundreds of thousands of poor and endangered youth. He was their teacher and father-figure.

Having sacrificed his entire life on behalf of others, he died on January 31, 1888. January 31st is now his feast day.

Don Bosco is the patron saint of school children, apprentices, editors, magicians, and juvenile delinquents. His Salesian Order is now the second-largest priestly order in the world.

For his legacy and contributions to youth and the Church, Pope St. John Paul II proclaimed him “Father and Teacher of Youth.” 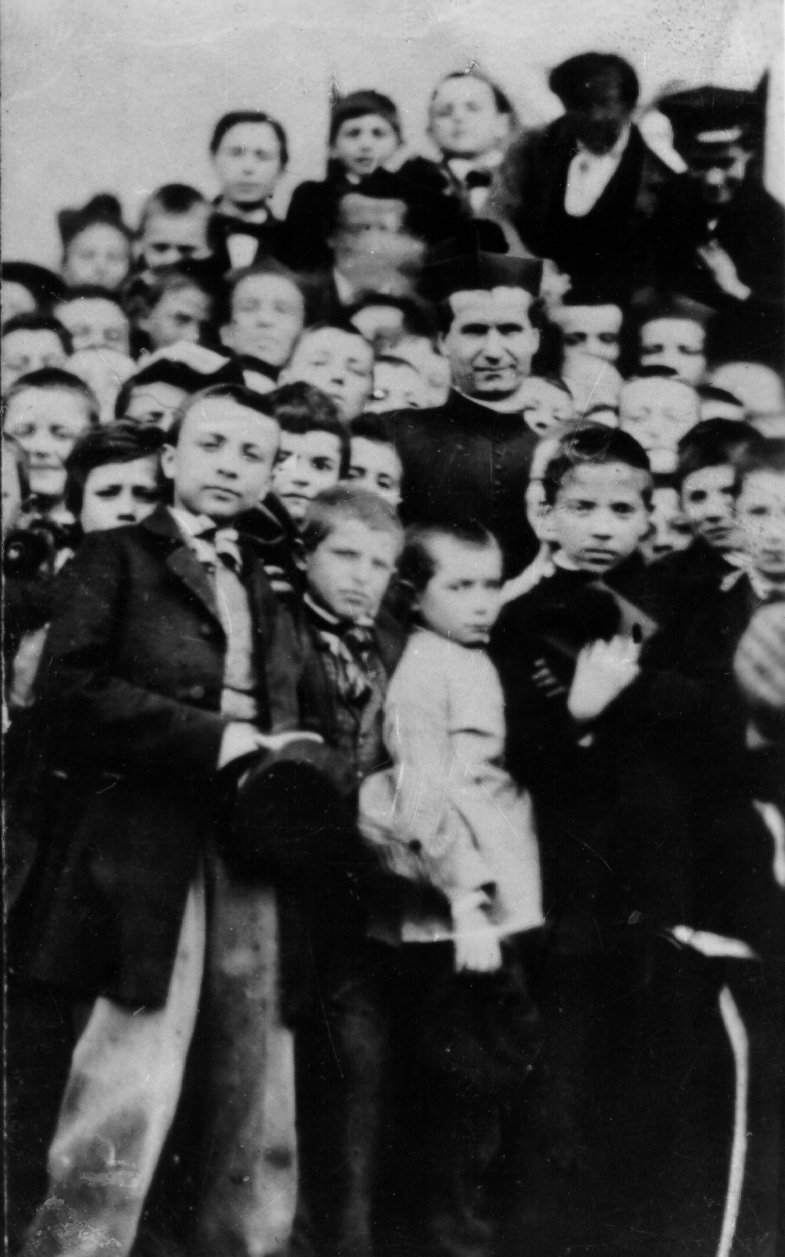 A Prayer to St. John Bosco for the Holiness of Children

St. John Bosco, Father and Teacher of Youth, companion to the young, the poor and abandoned, beloved instructor in the ways of God: your devotion to serving and caring for children in need is legendary throughout the Church.

Help me to work for the Kingdom of God, where all children are loved, cared for, and provided for, so that God’s tenderness and love are realized for every young person, especially those children who are suffering, and those in my life and my care.

By the gifts of the Holy Spirit, may they grow in wisdom, piety and humility. Strengthen them to overcome the allure, temptations and corruption of this world. Deliver them from snares both internal and external. Supply whatever is lacking in their lives, through God, in whom no child is ever fatherless.

By the gifts and fruits of the Holy Spirit and the love and protection of Our Most Holy Mother, the Help of Christians, we confidently entrust these children to you, through Christ, Our Lord.

St. John Bosco, pray for us. 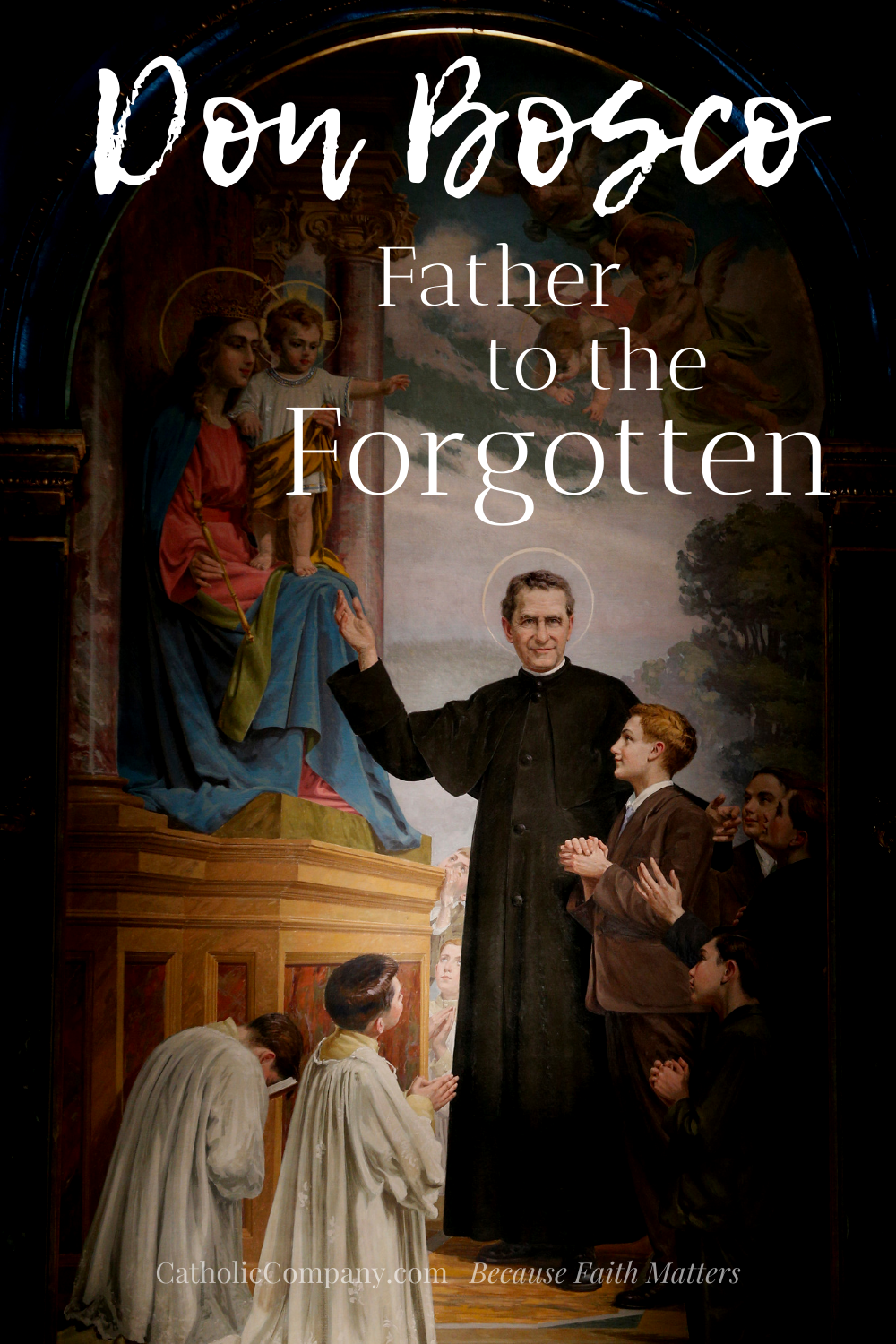