When I was a young girl, my grandmother kept a statue of St. Jude on her dresser. Since few things adorned her room, St. Jude was prominent there. She had a special love for him, and lived out her devotion in such a way that her family learned it, too. It was many years ago, but I can still see her statue in my mind’s eye.

St. Jude has always been a special saint for my family, and for families around the world. But who exactly is this miraculous intercessor known as the “Patron Saint of the Impossible?”

St. Jude and His Cousin...Jesus

Opinions vary as to St. Jude’s relationship to Christ, but he is generally thought to have been a cousin of Our Lord and the brother of St. James the Less. Regardless of their exact relationship, we know that St. Jude was a close relative and trusted friend of our Redeemer.

Jude walked with Jesus and the other Apostles as a companion and friend. He learned the truths of the Gospel on the dusty roads of Galilee. His formation by Our Lord prepared him to take the Gospel to Mesopotamia (now known as Iraq), Libya, Persia and Turkey.

Around 37 A.D. Jude became the leader of the Eastern Church established in Mesopotamia by St. Thomas the Apostle. He is believed to have assisted in founding the Church in Armenia; he also traveled extensively beyond the borders of the Roman Empire in his lifetime.

The Book of Jude in the New Testament is attributed to him. In it, we see his leadership role among the early Christians. He calls the faithful to a true Christian life of great devotion, one in which they hold fast to their faith no matter the consequences. He exhorts them to pray in the Spirit, that they might deepen their faith, hope, and love, and come to know God and His will. St. Jude had a tender love for Christ and desired to make Him known and loved.

Another instance that witnesses to Jude’s powerful intercession is the story of a miraculous healing. According to one account, the King of Edessa sent an envoy to the Christian community, hoping that Jesus would heal him from an illness. Jude visited the King, bringing with him a cloth imprinted with the image of Christ’s face. It is believed that this cloth healed the King of his illness. This is why St. Jude is often pictured holding an image of Christ’s face. 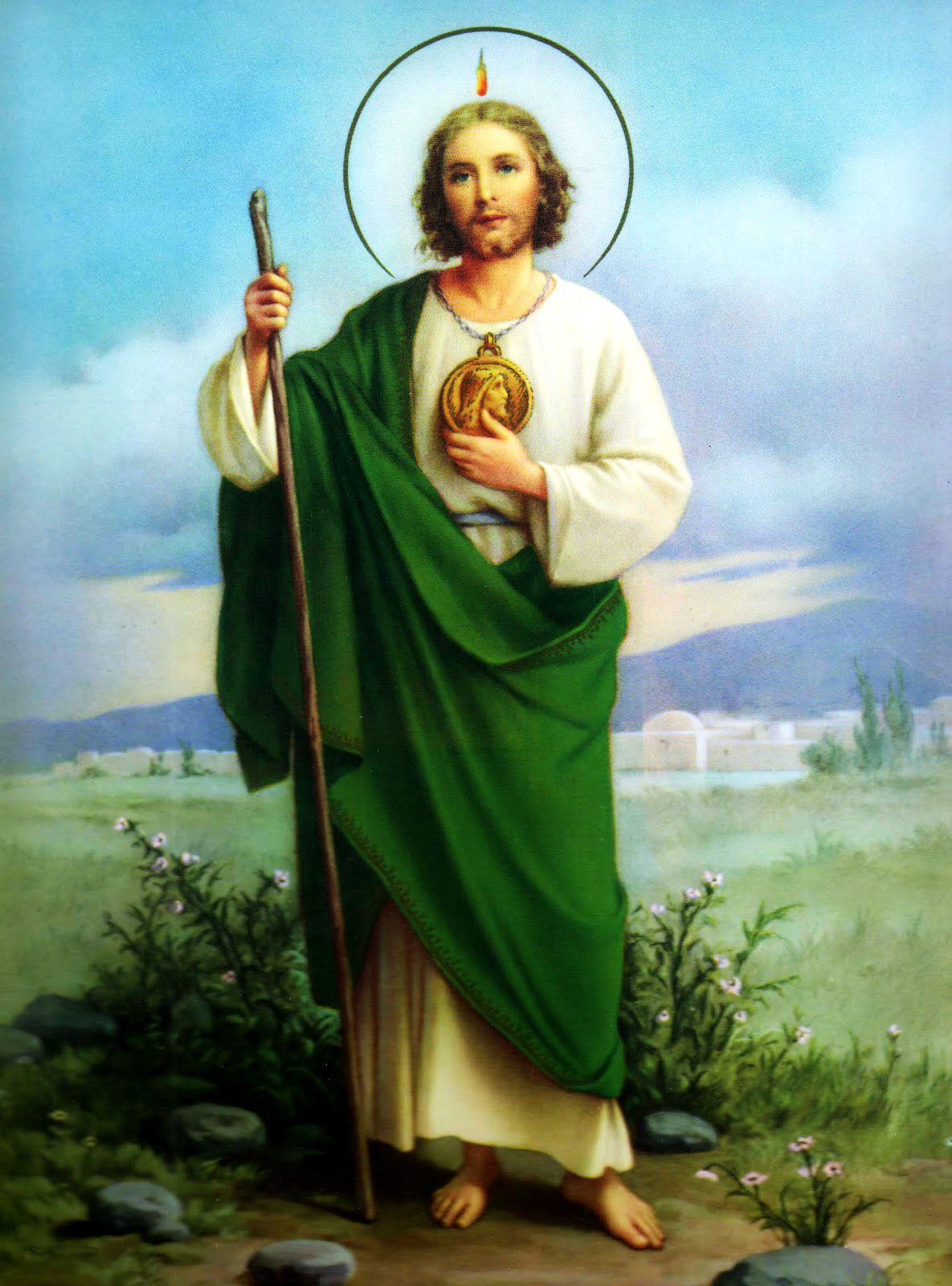 The Patron of Desperate Causes

Jesus instructed both St. Bridget of Sweden and St. Bernard, in visions, to pray to St. Jude and honor him as “the Patron Saint of the Impossible.”

In a vision recorded by St. Bridget, Christ told her:

“In accordance with his surname, Thaddeus, the amiable or loving, he will show himself most willing to give you help.”

After the Ascension of Jesus, St. Jude traveled, preached, instructed, and encouraged the persecuted Christians. Until he was martyred in Persia, around 65 A.D., he exhorted believers to stand strong in their faith. The loss of his presence was such a cause for despair in Christian communities that some historians think it might be another explanation for his patronage of desperate causes.

It could also be explained by a misplaced fear the early Christians had of praying to Jude, who shared a name with Judas Iscariot:

“So why is St. Jude Thaddaeus the patron saint of desperate causes? The traditional reason is rather simple: When one hears the name Judas (Latin and Greek) or even Jude (English), one immediately thinks of Judas Iscariot who betrayed our Lord. Therefore, a person had to be desperate to invoke his name. Being so seldom invoked and reverenced, St. Jude is ready and waiting to hear the prayers of those who call upon him. Ironically, he is probably the Apostle who is invoked the most in prayer, and the most memorialized in churches with statues or other artwork." —Father William P. Saunders

This also explains why the Gospel writers would have been anxious to distinguish him from the Iscariot by affirming that he was "Judas Thaddeus."

Regardless of the precise historical details, many began praying at his tomb and experiencing the gift of his intercession and healing. This further confirmed his presence and power before the throne of God. His body was eventually brought back to Rome and placed in a crypt below St. Peter’s Basilica, where it resides today.

An Intercessor in Financial Hardship

St. Jude has shown his gentle and loving presence in my life throughout many trials and struggles. From the time I was a little girl—looking up at him as he stood faithfully on my grandmother’s dresser—until now, almost fifty years later, he remains especially beloved. I have called on him many times when in need of great hope and support.

Here is one example of how he helped me: about ten years ago, my husband lost his job. He was unemployed for several years. It was a difficult time in our family in almost every way imaginable. We had two young children and were expecting our third. The longer he went without employment the more challenging it became, and the more bleak it seemed. I tucked one of my grandmother’s St. Jude holy cards into my prayer book, and laid my petitions in his hands.

One day during this difficult time, I received a small box in the mail. The return address was unfamiliar. The box contained an exquisite, hand-made St. Jude Chaplet, accompanied by a card printed with roses and scalloped lace.

“This Saint Jude Chaplet was requested as a gift for you by a dear friend of yours who wishes to remain anonymous. It has been a pleasure to craft this Chaplet for you. St. Jude grant every blessing to your family and you, now and always.”

I was so touched by the beautiful gift and its timing that writing about it now, almost ten years later, moves me to tears. At that time, my husband had been without a job for nearly three painful years. I didn’t know the St. Jude Chaplet, but I read about it and prayed it. Within three weeks my husband found a job. Thank you, St. Jude!

A Consoler in Illness and Suffering

About four years after St. Jude helped my husband, one of my teenagers was diagnosed with a life-threatening illness. She could no longer attend school and we decided to try homeschooling between treatments and surgeries. Doctors told us that her illness was incurable. I told them, “The diagnosis belongs to you, but the prognosis belongs to God alone.” I began to pray again to our faithful spiritual companion, St. Jude.

While completing the paperwork to register our home school, I asked my daughter what we should name it. She answered sweetly, “St. Jude Homeschool, because he is the patron saint of desperate causes.”

As we opened the doors to St. Jude Homeschool, we also opened our hearts to God’s will, and tried to focus on His love. I knew he would be interceding for my daughter.

After our local hospital declined to treat our daughter because of the severity of her condition, we took her to Baltimore, Maryland, where another hospital agreed to treat her. There her wonderful doctor told me, “We will bring all of our creativity to bear, and we will tell you when we cannot help you any longer.” At least it was something. It was hope. It was something to entrust to Our Lord, Our Lady, and our many friends among the saints. Especially St. Jude.

We spent almost seventeen months in Baltimore. Our daughter underwent thirteen rounds of treatment and four surgeries. It was exhausting beyond anything I could have imagined.

One day, my husband stumbled upon the St. Jude Shrine in Baltimore. It was within walking distance of our room at the Ronald McDonald House. We were only a few blocks away! Again, St. Jude had made himself known. He seems to take special delight in aiding desperate souls. What were the chances that, in finding a hospital that would agree to treat our daughter despite her advanced diagnosis, we would be in the city of his Shrine? And within walking distance of it? There are no coincidences.

The Shrine is a remarkable place. Masses and perpetual novenas take place daily. Catholics and non-Catholics alike visit to sit in quiet prayer. People come to the prayer room to light vigil candles and leave prayer petitions, notes of thanksgiving, and testimonials. Despite the desperation and seeming impossibilities, you can feel the hope.

My daughter has endured her illness heroically these last four and a half years. She has not received a physical healing, but healing can come to us in many forms, and is not always physical. The many prayers of faithful family and friends have strengthened her with courage and perseverance. Jesus and Our Lady have sustained her as she carries her heavy cross. The special protection of St. Jude has brought many graces to her situation. I continue to call on him as a special patron for this intention as well as others.

A Companion for My Journey and for Yours

This gentle Saint of Hope lived and died for Christ, enduring trials faithfully, giving his life for God and for his fellow Christians. When we are weighed down with trials and difficulties, devotion to St. Jude can give us the perseverance we need to embrace God’s will. He can attain for us the strength, peace, and wisdom to move forward. We can go to him in prayer, knowing that no need is entirely desperate.

He is no ordinary advocate; he was the earthly companion of Jesus Himself. He spread hope and encouragement in the early Church during times of great trial, and he continues to do so today. St. Jude is the beloved friend of our Redeemer, eager to bring us into closer friendship with the Lord, especially during our sufferings.

Do not be afraid to go to him. Do not fear the “impossible,” for nothing is impossible with God. Ask St. Jude to accompany you faithfully, as he did Christ, and see where he takes you.

St. Jude, patron saint of the Impossible, the Desperate, and the Hopeless, pray for us!

Do you have an intention for St. Jude, or a story about his intercession? Share below! 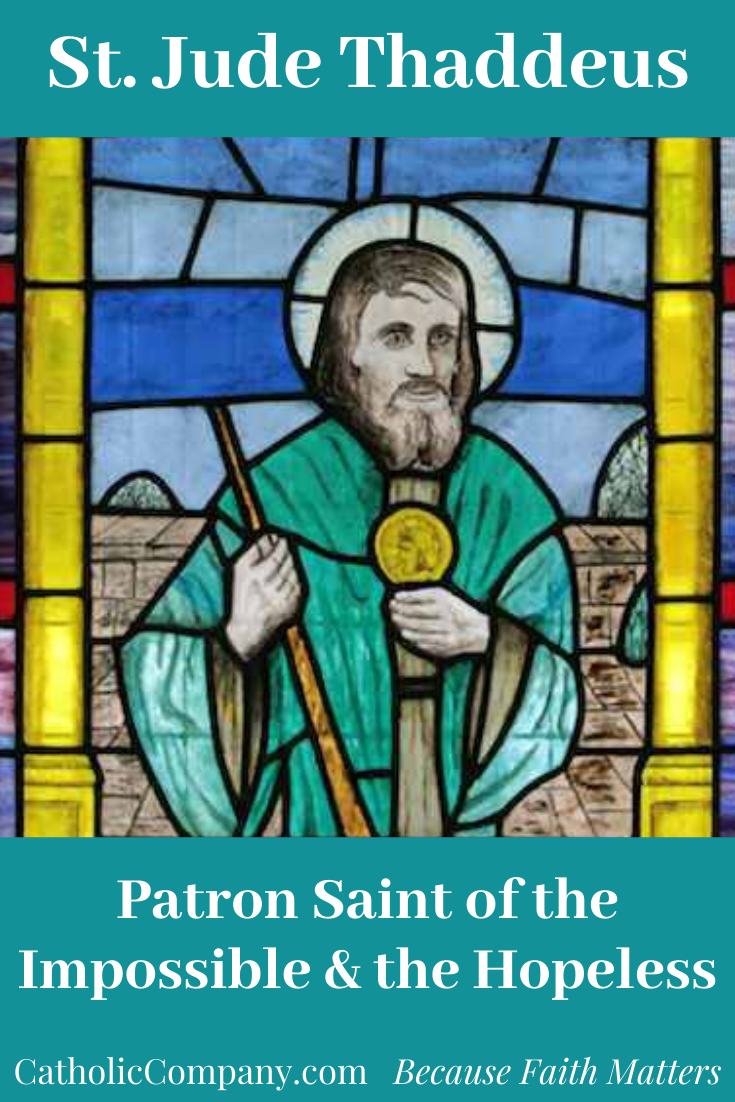