In just a few weeks my husband and I will become grandparents for the first time. I have long heard from friends and others that being a grandparent is a joy like no other. We, along with all of our other children, are giddy with excitement, and I was pleasantly surprised when I discovered that the feast of St. Joachim and St. Anne, the patron saints of grandparents, is July 26th, right in time for the birth of our grandson. Joachim and Anne are the parents of the Blessed Virgin Mary, which of course makes them the grandparents of our Lord Jesus Christ, and so, very special grandparents indeed.

While not much is known about Joachim and Anne (or Ann), what we do know mostly comes from an apocryphal Christian writing called the Protoevangelium Jacobi (or Gospel of James) which was written around the year 170. While these writings are not part of the defined canon books of Scripture, they contain many traditional stories that can help increase our faith and devotion.

The Book of James tell us that Sts. Joachim and Anne were prominent members of the Jewish community of their time. From the Protoevangelium Jacobi:

Joachim was of the tribe of Judah and a descendant of King David. St. Anna (as she was called) was the daughter of Matthan the priest, of the tribe of Levi, as was Aaron the High Priest. Matthan had three daughters: Mary, Zoia, and Anna. Mary was married in Bethlehem and bore Salome; Zoia was also married in Bethlehem and bore Elizabeth the mother of St. John the Baptist; and Anna was married in Nazareth to Joachim, and in old age gave birth to Mary.

Sts. Joachim and Anna had been married for fifty years, and were barren. They lived devoutly and quietly, using only a third of their income for themselves and giving a third to the poor and a third to the Temple. Joachim had done this since he was 15-years-old, and God multiplied his flocks, so the couple was well provided for. They longed for a child but remained childless into their old age. When they were in Jerusalem to offer sacrifice to God, the High Priest, Issachar, upbraided Joachim, "You are not worthy to offer sacrifice with those childless hands." Others who had children jostled Joachim, thrusting him back as unworthy. In despair, he consulted the geneological records of the tribes of Israel and discovered every righteous man in the nation had been blessed with children, except him. This caused the aged saint great grief, and he and his wife left with heavy hearts. Then the two of them gave themselves to prayer to God that He would work in them the wonder that He had worked in Abraham and Sarah, and give them a child to comfort their old age.

St. Joachim took his flocks and went to a high mountain, refusing to return home in shame. Meanwhile, St. Anna prayed in her garden. God sent the Archangel Gabriel to each of them, who gave them tidings of the birth of "a daughter most blessed, by whom all the nations of the earth will be blessed, and through whom will come the salvation of the world." Each promised to have their child raised in the Temple as a holy vessel of God. The archangel told St. Joachim to return home, where he would find his wife waiting for him in the city gate. St. Anna he told to wait at the gate. When they saw one another, they embraced, and this image is the traditional icon of their feast, shown below. 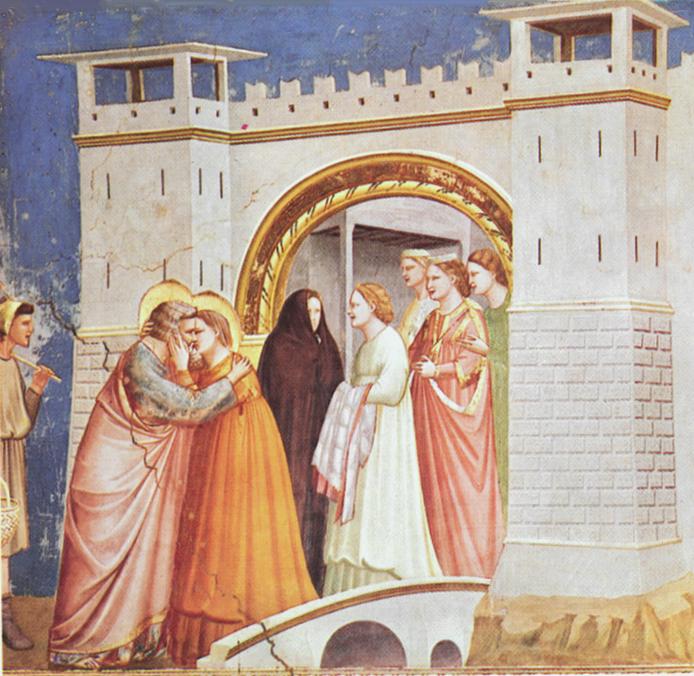 From there, we know who the Archangel St. Gabriel appeared to next! A young Jewish girl, in the town of Nazareth, whose name was Mary...

With the upcoming birth of our grandson, I have been recently reflecting on the vocation of grandparents and how it differs from that of parents. The first thing that comes to mind is time for prayer. I remember when our first child was born how I immediately felt a flood of emotion. I knew something had tangibly changed and it would never be the same.  Besides the tremendous love I felt, the responsibility of becoming a parent was suddenly palpable. There was this new little one, now totally dependent upon me and my husband for everything. This vocation would consume much of my time for many years.

With the responsibility of parenting our grandson on my son and daughter in law, we as grandparents will be in the perfect position to dedicate more time to prayer on his behalf. And what an important responsibility that is! I hope that we will be as steadfast and spiritually supportive as St. Joachim and St. Anne were to the Holy Family.

Even before the birth of our grandson I am praying for the intercession of this powerful saintly duo!

The following prayer is from the Collect prayer of the Mass on the feast day of Sts. Joachim and Anne, and a beautiful petition to pray for your family, especially your grandchildren:

“O Lord, God of our Fathers, who bestowed on Saints Joachim and Anne this grace, that of them should be born the Mother of your incarnate Son, grant, through the prayers of both, that we may attain the salvation you have promised to your people. Through our Lord Jesus Christ, your Son, who lives and reigns with you in the unity of the Holy Spirit, one God, for ever and ever.”

St. Joachim and St. Anne, pray for us!