Chalk this up as one of the more interesting "Lives of the Saints" stories you'll read!

Some saints, while they were still living, had other saints appear to them from heaven to offer encouragement (for example, St. Therese of Lisieux appeared to St. Faustina). Some also had the Devil appear and physically attack them (for example, St. Padre Pio). But it's not too common that a saint from heaven appears to another living saint to beat them up!

As a fruit of their labor the region's most powerful ruler, the King of Kent, became a baptized Christian along with thousands of his countrymen. Despite the early fear and trepidation of the missionaries, the mission was a success and Christianity grew from strength to strength in the sometimes violent pagan land.

When Augustine died, Lawrence became the next archbishop. He was a zealous leader and urged the Celtic bishops to keep peace and unity with Rome. However, when the King of Kent died, the king's pagan son inherited the throne and unraveled much of the advance of the faith among the people, causing some of the original band of missionaries to flee to Gaul in fear for their lives.

Lawrence was so upset and discouraged by the abandonment of Christianity among his flock, who so easily forsook Christ, that he resolved to abandon them in return.  He planned to leave his bishopric and flee with the other missionaries to Gaul.

The night before his departure, St. Peter the Apostle appeared to Lawrence in a vision, rebuked him, and scourged him so badly that Lawrence had physical marks on his body from the encounter. St. Lawrence then relayed his vision to the new King of Kent and showed him his wounds, causing the King to convert to the Christian faith. The feast day of St. Lawrence of Canterbury is celebrated on February 2nd.

This story is a lesson that sometimes we need our older brothers and sisters in the faith to end our pity party and rebuke us for our lack of faith! It also raises an interesting question; out of all the saints and angels, why was it St. Peter specifically who appeared to St. Lawrence?

Certainly St. Peter, as Bishop of Rome and head apostle of the Universal Church, had standing to appear and rebuke the head of the Catholic Church in England. But this might not be the only reason.

According to tradition, when St. Peter was still alive and realized that his martyrdom was close at hand, he 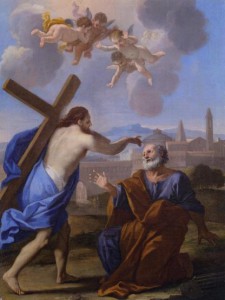 made plans to flee Rome and abandon his flock during the terrible Christian persecution under the Roman emperor. As Peter was fleeing the city, he encountered Jesus going in the opposite direction, back towards the city.  Peter asked him, “Quo vadis, Domine?” (“Where are you going, Lord?”). Jesus replied, “To Rome, to be crucified again.”

St. Peter understood this gentle rebuke, and turned back to follow our Lord to his death. In shame he asks to be crucified upside down, as he is not worthy to die in the same manner as his Master. This encounter became known as the Quo Vadis Legend. Perhaps this is why it was St. Peter who appeared to St. Lawrence, to warn him against making the same mistake that he almost did. A bishop should always prefer martyrdom rather than abandon the flock to whom they were entrusted by Christ.

What do you think about this story? Have you ever had a friend save you from making a terrible mistake at a time when your faith was weak?

This article has been updated and was originally published in February 2015. © The Catholic Company. All rights reserved.