This Holy Week, many of us are searching for ways to bring the celebration of the Triduum into our homes. Without the ability to go to our parishes and take part in the traditional liturgies, we must instead celebrate the Paschal Mystery within our "domestic churches"—that is, within our families.

Many of the Triduum's liturgies can be easily adapted to the home: we can venerate the cross or pray the Stations on Good Friday; we can eliminate noise on Holy Saturday, to remember Christ in the tomb; and we can have a celebratory family meal, a feast to celebrate Christ's Resurrection on Easter Sunday.

But Holy Thursday presents a particular problem, since the main way that the Church celebrates Holy Thursday is through the Mass of the Lord's Supper—a celebration that is unavailable to us at home (except through livestream, which is a blessing, but not a replacement).

However, there is another, lesser-known Holy Thursday tradition that can easily be adapted to the home: the Seven Churches Pilgrimage.

St. Philip Neri established the Seven Churches Pilgrimage in Rome around 1553, and it grew into the well-established practice of visiting many of the common pilgrimage sites around the city.

The pilgrimage works like this: after attending the Mass of the Lord's Supper—once Our Lord in the Blessed Sacrament was reposed in the tabernacle—pilgrims leave the church and go to one of the seven pilgrimage churches and spend some time there in prayer, following Our Lord's command to "keep watch" with Him. After some time in prayer, the pilgrim moves on to the next Church, spending some time there as well. This would continue throughout the night, until the pilgrims have visited the seven major churches in Rome and meditated on the many events of Our Lord’s Passion. 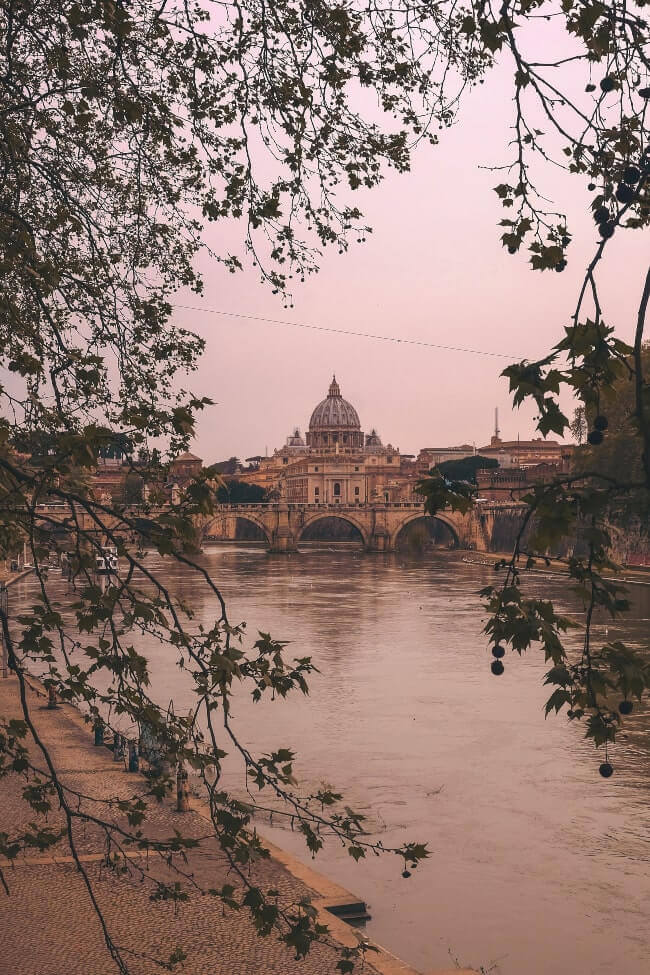 This pilgrimage is made every year in Rome. It’s even done around the world: people who live in urban areas will drive to seven churches around their city in order to imitate the original pilgrimage.

Do The Seven Church Pilgrimage From Home This Holy Week

How can this practice of “visiting seven different churches” be adapted when we can’t leave the house? Simple: prayer. The point of the Seven Churches Pilgrimage isn't to walk around the pretty city streets at night: it's to keep Our Lord company as He enters His Passion.

The most important part of the pilgrimage is not being physically present in the building, but bringing ourselves into the presence of God and offering Him our time.

This Holy Thursday, we’d like to help you do that by offering you a “virtual pilgrimage” to the Seven Churches, and invite you to pray with us at each “visit.”

We’ll show you a picture of the church in Rome where the pilgrimage would take place, and invite you to meditate on one of the episodes of Jesus’ life between the Last Supper and the Crucifixion.

Then, after spending some time—a few minutes, at least—meditating on the Gospel reading, pray an Our Father, a Hail Mary, and a Glory Be. Then, move on to the next “visit,” keeping Jesus company as He enters His Passion.

Meditation: Jesus in the Garden of Gethsemane

And He came out and proceeded as was His custom to the Mount of Olives; and the disciples also followed Him. When He arrived at the place, He said to them, "Pray that you may not enter into temptation." And He withdrew from them about a stone's throw, and He knelt down and began to pray, saying, "Father, if You are willing, remove this cup from Me; yet not My will, but Yours be done." Now an angel from heaven appeared to Him, strengthening Him. And being in agony He was praying very fervently; and His sweat became like drops of blood, falling down upon the ground. When He rose from prayer, He came to the disciples and found them sleeping from sorrow, and said to them, "Why are you sleeping? Get up and pray that you may not enter into temptation."
—Luke 22: 39-46

The high priest then questioned Jesus about His disciples, and about His teaching. Jesus answered him, "I have spoken openly to the world; I always taught in synagogues and in the temple, where all the Jews come together; and I spoke nothing in secret. Why do you question Me? Question those who have heard what I spoke to them; they know what I said." When He had said this, one of the officers standing nearby struck Jesus, saying, "Is that the way You answer the high priest?"
—John 18:19-22

But Jesus kept silent. And the high priest said to Him, "I adjure You by the living God, that You tell us whether You are the Christ, the Son of God." Jesus said to him, "You have said it yourself; nevertheless I tell you, hereafter you will see the Son of Man sitting at the right hand of Power, and coming on the clouds of heaven." Then the high priest tore his robes and said, "He has blasphemed! What further need do we have of witnesses? Behold, you have now heard the blasphemy."
—Matthew 26:63-65

Pilate answered, "I am not a Jew, am I? Your own nation and the chief priests delivered You to me; what have You done?" Jesus answered, "My kingdom is not of this world. If My kingdom were of this world, then My servants would be fighting so that I would not be handed over to the Jews; but as it is, My kingdom is not of this realm." Therefore Pilate said to Him, "So You are a king?" Jesus answered, "You say correctly that I am a king. For this I have been born, and for this I have come into the world, to testify to the truth. Everyone who is of the truth hears My voice."
—John 18:35-37

Now Herod was very glad when he saw Jesus; for he had wanted to see Him for a long time, because he had been hearing about Him and was hoping to see some sign performed by Him. And he questioned Him at some length; but He answered him nothing. And Herod with his soldiers, after treating Him with contempt and mocking Him, dressed Him in a gorgeous robe and sent Him back to Pilate.
—Luke 23:8-9; 11

Pilate said to them, "Then what shall I do with Jesus who is called Christ?" They all said, "Crucify Him!" And he said, "Why, what evil has He done?" But they kept shouting all the more, saying, "Crucify Him!" When Pilate saw that he was accomplishing nothing, but rather that a riot was starting, he took water and washed his hands in front of the crowd, saying, "I am innocent of this Man’s blood; see to that yourselves." And all the people said, "His blood shall be on us and on our children!" Then he released Barabbas for them; but after having Jesus scourged, he handed Him over to be crucified.
—Matthew 27:22-26

Meditation: Jesus Given the Crown of Thorns and Led to His Crucifixion

Then the soldiers of the governor took Jesus into the Praetorium and gathered the whole Roman cohort around Him. They stripped Him and put a scarlet robe on Him. And after twisting together a crown of thorns, they put it on His head, and a reed in His right hand; and they knelt down before Him and mocked Him, saying, "Hail, King of the Jews!" They spat on Him, and took the reed and began to beat Him on the head. After they had mocked Him, they took the scarlet robe off Him and put His own garments back on Him, and led Him away to crucify Him.
—Matthew 27:27-31

After the Seven Church Pilgrimage...

After the pilgrimage, there is nothing left to do but to enter into the commemoration of Good Friday. We offer some ideas about how to observe that solemn day at home with your family, in this post.

We hope you find this “virtual pilgrimage” helpful for entering into prayer on Holy Thursday.

If you enjoyed it, let us know about your experience in the comments below! 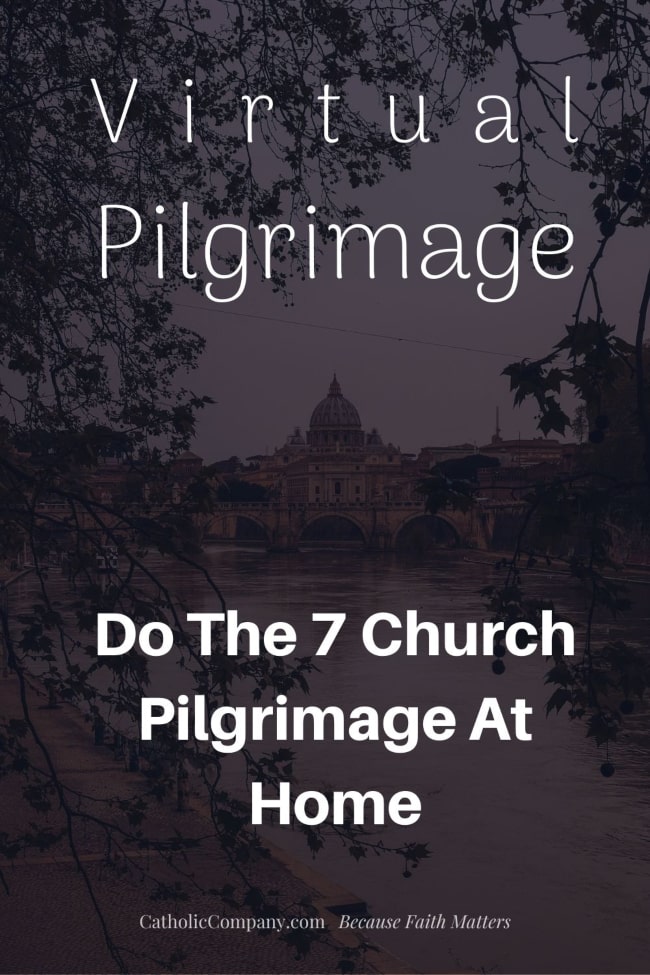