The feast of the Sacred Heart of Jesus is one of the most popular Catholic devotions. Many are familiar with the story of Jesus appearing to St. Margaret Mary Alacoque to request a special devotion to his Sacred Heart, and how it was later instituted as a feast day for the universal Church. But there is so much more to the Sacred Heart devotion than is commonly known.

The Divine Mercy, the feast of Corpus Christi and the Eucharist, the Sacred Heart of Jesus, and the Immaculate Heart of Mary are all marvelously interconnected. Providentially, they are also back to back feasts on the Roman Catholic liturgical calendar. The depths of these mysteries can only be plunged in heaven. However, this article will attempt to skim the surface of these mysteries just a bit, so that you can appreciate this special devotion in a deeper theological way.

The Very Interesting History of the Sacred Heart Devotion

The devotion to the Sacred Heart of Jesus has its roots all the way back to the time of the Apostles, and arguably even before this in the Song of Songs penned by Solomon. St. John the Evangelist is the Apostle associated with the Sacred Heart devotion because, one, he was known as the disciple whom Jesus loved; two, he was called the “Apostle of Love” due to the theme of love repeated in his Gospel and epistles; and three, because he had the special privilege of reclining on the chest of Jesus at the Last Supper (the significance of which will be discussed below).

In the Middle Ages the heart of Jesus became a specific object of adoration as the center and wellspring of Jesus' passionate and infinite love for us. The Sacred Heart also represented Jesus' woundedness, both the physical wound incurred to his physical heart on the cross (by the centurion's spear), and the spiritual wound of a love so great that he gave up his life, even while this love is scorned by those for whom it was so generously given.

This dual yet united aspect of the Sacred Heart, both passionately loving and being painfully wounded by love, is clearly seen in a mystical text entitled “Vitis mystica” that is attributed to St. Bernard of Clairvaux. A quote from this text reads,

“They dug therefore, and they dug through not only His hands, but also His feet, yea, and His side also; and the very recesses of His most sacred Heart, they pierced with the spear of rage, though it had already been wounded with the spear of love. 'Thou hast wounded,' says the Spouse in the Canticles of love, "thou hast wounded my Heart, my sister, my spouse.' O Lord Jesus, Thy spouse, Thy love, Thy sister has wounded Thy Heart. Why then was it necessary that that Heart should be wounded further by Thine enemies?”

A devotion to the Sacred Heart was thus twofold; one, it adored the infinite and self-giving love of Jesus, and two, this adoration was given to Jesus' heart in reparation for the disdain, rejection, and coldness his loving heart endured from others. 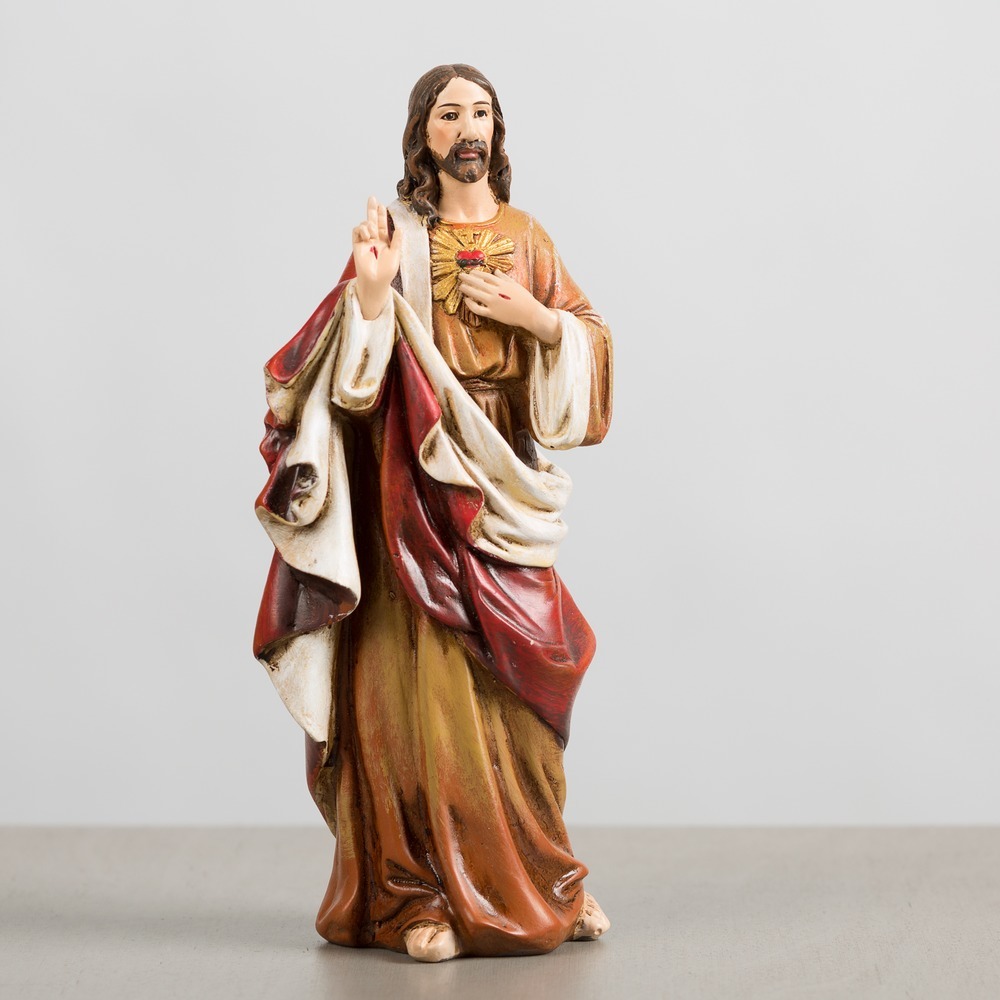 In possession of a copy of the beautiful “Vitis mystica”, two 12th century Cistercian visionaries named St. Gertrude the Great and St. Mechtilde were known for enjoying mystical experiences with Jesus and his Sacred Heart. St. Gertrude the Great, who perhaps enjoyed the more profound intimacy of the two, had a mystical experience on the feast day of St. John the Evangelist in which she was granted the grace to rest near the living heart of Jesus.

St. Gertrude experienced the exquisite and divine beatings of Jesus' heart and wondered why St. John, who had also reclined on the heart of Jesus at the Last Supper, had never written of his experience.

St. John appeared to her in a vision and replied, "Yes, I heard them, and my soul was penetrated with their sweetness even to its very center” and explained that he did not write of this because, "My mission was to write of the Eternal Word . . . but the language of the blissful pulsations of the Sacred Heart is reserved for latter times, that the time-worn world, grown cold in the love of God, may be warmed up by hearing of such mysteries."

St. Gertrude's mystical experiences with the Sacred Heart of Jesus, as well as special prayers she penned in devotion to Him, are contained in the Herald of Divine Love and The Life and Revelations of St. Gertrude. Here is one touching prayer to the Sacred Heart she authored:

"I salute thee, O Sacred Heart of Jesus, living and vivifying source of eternal life, infinite treasure of the Divinity, ardent furnace of Divine love; Thou art the place of my repose and my refuge. Enkindle in my heart the fire of that ardent love with which Thine own is all inflamed; pour into my heart the great graces of which Thine is the source, and grant that my heart may be so closely united to Thine, that Thy will may be mine, and that my will may be eternally conformed to Thine, since I desire that henceforth Thy holy will may be the rule of all my desires and all my actions. Amen." 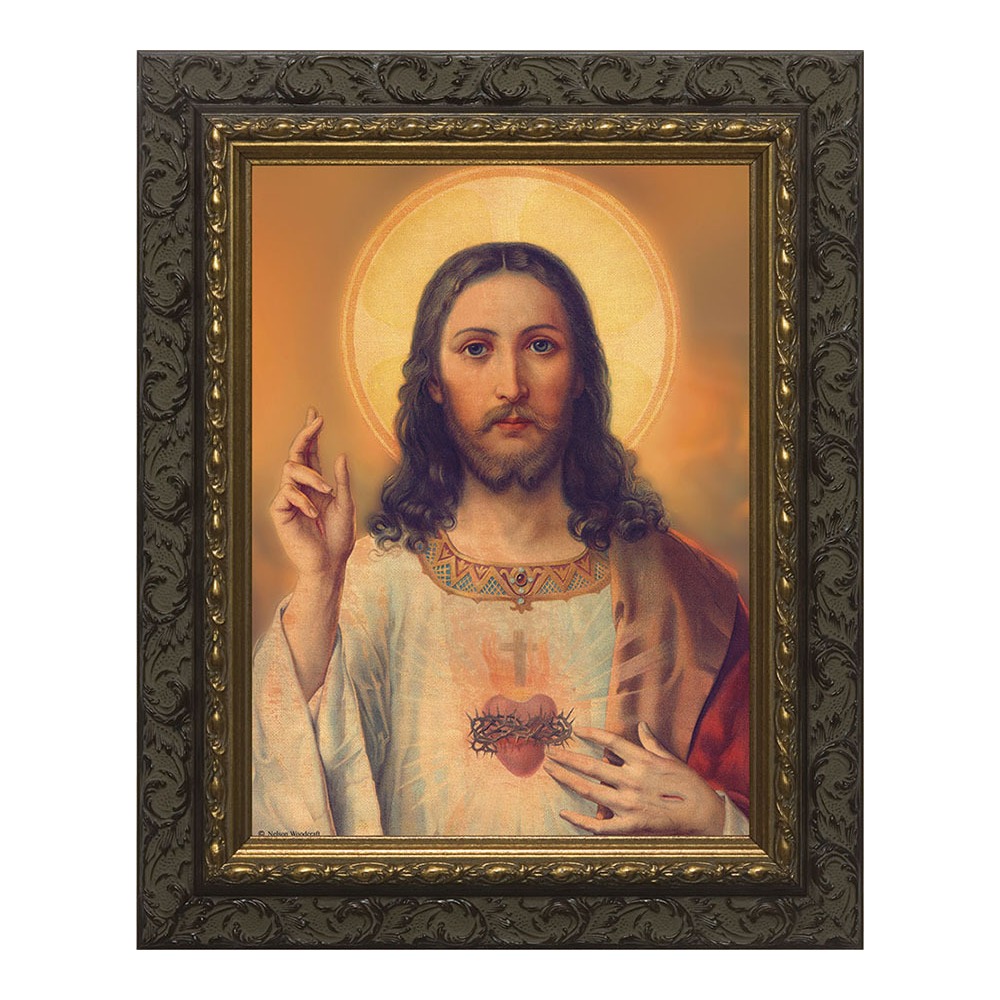 Four centuries later in 1673, Jesus appeared to St. Margaret Mary Alacoque, showing her a vision of the now famous image of his Sacred Heart surrounded by flames of love. He said to her, "My Heart is so full of love for men that It can no longer contain the flames of Its burning love. I must discover to men the treasures of My Heart and save them from perdition."

Although the Sacred Heart devotion was devoutly practiced by many saints and religious in the previous centuries, it was not yet widespread throughout the universal Church. This was the special mission given to St. Margaret Mary; to her Jesus revealed his desire for a stronger, increased, and widespread devotion to his Sacred Heart.

St. Margaret Mary Alacoque, just like St. John and St. Gertrude, was allowed in a mystical vision to rest her head upon Jesus' heart, again on the feast day of St. John the Evangelist. Thus Jesus revealed that in addition to his love, it is devotion to his heart of flesh, his physical beating heart, that he desired to be propagated. In part two of this blog post, we will see that the Sacred Heart of Jesus devotion is closely connected with the Blessed Sacrament.

Finally, on June 11, 1899, by order of Pope Leo XIII, at the request of Jesus all mankind was solemnly consecrated to His Sacred Heart. Pope Leo XIII called this event "the great act" of his pontificate.

Continue reading Part Two HERE about the connection with the Divine Mercy, the Holy Eucharist, and the Immaculate Heart of Mary.

This article has been updated. It was originally published in June 2012 © The Catholic Company