How did Elizabeth Ann Seton discover the Catholic Faith?

Elizabeth left the United States as a devout Episcopalian and returned a budding Catholic.

In 1803, Elizabeth Ann Seton sailed to Italy with her husband William, hoping that the warm climate would cure William’s ill-health.

Upon the Setons’ arrival in Pisa, they were quarantined in a damp, cold building for nearly a month. William’s strength quickly deteriorated and he passed away just two weeks after his release from quarantine.

A Catholic couple, Antonio and Amabilia Filicchi, took the distraught widow into their home. They cared for her until she was ready to return to the United States.

In the meantime, they introduced the devout Episcopalian to their Faith.

Elizabeth was drawn to the Catholic Church and asked the Filicchis many questions. She fell in love with the Blessed Mother.

Antonio accompanied Elizabeth when she returned to the United States, catechizing and supporting her as she faced anti-Catholic hostility from her family. A year later, she entered the Catholic Church.

Afterwards she wrote to Amabilia, describing the moment of her entrance into the Faith: “How [awe-inspiring] those words of unloosing, after thirty years of bondage! I felt as if my chains fell, as those of Saint Peter at the touch of the divine messenger.”

Elizabeth is the first American-born Catholic to be canonized. She knew that the Land of the Free owes its gift of freedom to God. When you display the U.S. Pledge of Allegiance Garden Flag in your yard, you will remind yourself—and your neighbors—that our country is truly free so long as it stands “under God.” Need a pole so you can hang up this wonderful flag? Our 3-Piece Garden Flag Pole is easy to set up and simple to store. Get both pieces today at The Catholic Company! 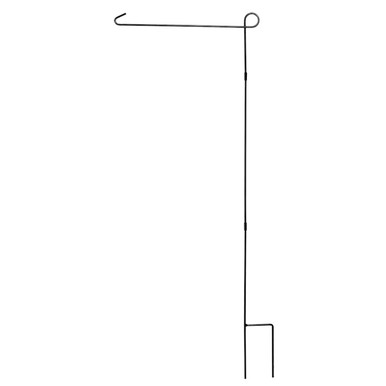