Who is the patron saint of sailors?

Is it St. Peter? Or perhaps the prophet Jonah?

According to legend, St. Nicholas made a pilgrimage to the Holy Land. His home town of Myra was a port city on the Mediterranean, making the journey to Jerusalem relatively short.

On his return voyage, however, a fierce storm struck his little ship. All the sailors and passengers, terrified, gave themselves up as lost.

All, that is, except one.

Nicholas quietly and calmly knelt upon the heaving, wave-pummeled deck of the ship, and prayed.

Immediately the storm calmed, Nicholas and the sailors and passengers arrived safely in Myra.

A depiction of St. Nicholas by Jaroslav Čermák

Nicholas is said to have saved many other storm-beset ships when his intercession was called upon. Sometimes he would even appear to the sailors, standing on top of the mast and praying for them. In fact, his miracles are so numerous that he is one of the few saints with the title of “Wonderworker.”

This Christmas, as you enjoy the gifts and traditions of Santa Claus, remember the Bishop of Myra who calmed the Mediterranean Sea. Most important of all, join him in adoring the Newborn King. What better way to do so than with our Kneeling Santa Figure? Blending the religious and popular aspects of Christmas, this 8” statue is the perfect reminder that all traditions bow to the Christ Child, Whose birth they celebrate. Pick yours up today at The Catholic Company! A Special Place for Santa Book 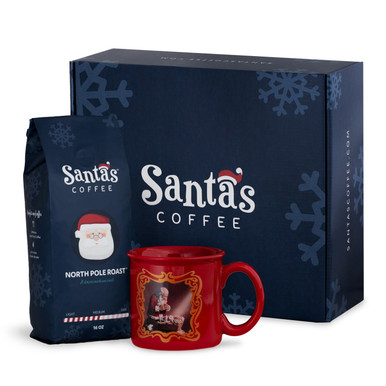