When the dust of cancel-culture settles, this indomitable saint will always stand tall.

In 1773, a sixty-year-old Franciscan friar made a 2,400 mile journey from the central coast of California to Mexico City. Why would an older man—with a leg injury—make such a journey?

Difficulties with the military commander and governor at Monterey had motivated the trip. Friar Junipero Serra wanted stronger protections for the missions and the Native Americans they served. He drew up a kind of “bill of rights” for the missions and natives and presented it to the Spanish Viceroy, who adopted most of it.

Yes, he did. He loved them and dedicated his life to them. First serving in Mexico, then in California, he founded nine of twenty-one missions that would become some of California’s most famous cities. These missions brought the Faith to the natives, as well as protection, instruction in agriculture, and better living conditions.

Unstoppable in life, St. Junipero Serra still holds his ground against the destructive winds of ignorance and bad history long after his death. True history will always vindicate the heroic deeds and virtues of the saintly Apostle of California.

Even if they take away every statue of St. Junipero from the public square, you can honor this great saint with your own statue to be displayed in your home or office. 9” tall with a bronzed finish, this beautiful representation of St. Junipero will keep your devotion strong. Order yours from The Catholic Company today! 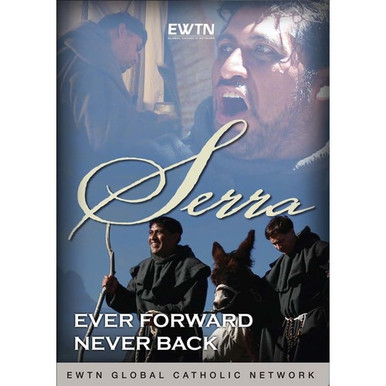 Serra – Ever Forward, Never Back – DVD