How many countries did St. Francis Xavier visit?

It’s difficult to give an exact answer to the question of how many countries were visited by one of the greatest missionaries of all time. Let’s keep track as we dive into his story (and only count those relevant to his missionary work).

St. Francis was the son of a wealthy family in the Kingdom of Navarre in Basque country in modern-day Spain. He initially had no plans to be a missionary, but all that changed when he met a certain Ignatius of Loyola while studying at the University of Paris. Together with Francis and five others, Ignatius founded the Jesuit order in 1534. St. Francis was ordained a priest in 1537.

In 1541, Ignatius sent Francis and another missionary, at the request of the King of Portugal, to minister to the Christians living in Portuguese India (that’s 1 country visited so far). During three years in India and Sri Lanka (that’s 2), he instructed the uncatechized, converted non-believers, and built many churches.

He then traveled to Malacca, in modern-day Malaysia (3), and to the Maluku islands of Indonesia (4)—the “Spice Islands.”

In Malaysia he made the acquaintance of a Japanese man named Anjiro who was interested in Christianity and told Francis all about his home country. Anjiro was baptized Pablo of Sante Fe, assisting Francis as a guide and interpreter when the Jesuits landed in Japan (5) in 1549.

Japan presented many challenges to the missionaries, including the difficult language and the pre-existence of the Buddhist and Shinto religions. Nonetheless they made progress and established several congregations. St. Francis spent two years there, and although terrible persecutions would come to Japan not long after, the Faith preached by the Jesuits would survive.

St. Francis set off for China (6) in April of 1552 but only made it as far as a Chinese island off the mainland. There he fell ill and, after his long missionary labors, departed on his final voyage to his heavenly home on December 3. He was canonized along with St. Ignatius in 1622 and is buried in Goa, India. His right arm—which had once blessed and baptized so many—is enshrined in the Jesuit Church of the Gesù in Rome.

So, all told, St. Francis Xavier visited at least six countries in a mere eleven years and baptized tens of thousands of souls for Jesus Christ.

Danger on the high seas, grand missions to distant islands, going where none have gone before—what adventure is to be found in the lives of the saints! The Book of Saints is a collection of stories of some of the greatest heroes of our Faith, including St. Francis Xavier. Arranged in order of the liturgical year and small enough to slide into a backpack, it makes the perfect stocking stuffer for the young adventurer in your life. Available today at The Catholic Company!

The Book of Saints 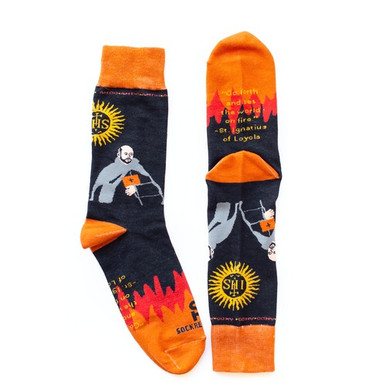