The magnificent Cathedral of Notre-Dame de Paris would certainly be missing something without its gargoyles. Actually, it might not be standing without them.

The fantastical stone beasts adorning Notre-Dame’s exterior have inspired spiritual and creative thinking since the cathedral was built in the 12th to 14th centuries.

A Notre-Dame gargoyle…or is it? Read on!

But what are gargoyles, and why did the architects of Notre-Dame install them?

To understand the stone creatures overlooking Paris, one must first call them by their proper names. We often hear the term “gargoyle” applied to any of these statues, but a better general term would be “grotesque.” A “gargoyle” is a grotesque that serves a practical function, as opposed to a “chimera,” a grotesque that is purely decorative. Some of the famous “gargoyles” of Notre-Dame are actually chimeras, and were added later during the restorations undertaken in the 19th century.

So, a gargoyle is functional. But what function could such a beast possibly serve?

Gargoyles are, in fact, rain-spouts. Water soaking into the walls and mortar of a building can damage its integrity, so the medieval architects installed gargoyles to do the job of gutters. Rainwater collects in their hollowed-out, elongated bodies and shoots out of their mouths, protecting the stone walls of the mighty structure.

Okay, but why do these gargoyle rain-spouts have to be so ugly?

Grotesques are ugly because the Church employed them to illustrate to the faithful the reality—and ugliness—of evil. Some say that they are a contrast to the beautiful depictions of the saints and angels, and that their position on the outside of the building reminds the faithful of the dangers of the world and the spiritual safety to be found within.

Notre-Dame Cathedral is one of the marvels of the Catholic world. For centuries it has weathered not only rain and physical tempests, but the chaos of heresies, wars, and revolutions. It survived the iconoclasm of the French Revolution, the Nazi occupation of Paris in World War II, and most recently, a near-fatal fire. All those storms came and went, but this cathedral, like the Church herself, remains.

As a tribute to this glorious cathedral, The Catholic Company offers a stunning, handcrafted Notre-Dame Rosary. The agate and jasper beads reflect the colors of the cathedral’s stone, and St. Joan of Arc, patroness of France, is depicted on the center medal. A crown of thorns, commemorating the precious relic housed in the cathedral, encircles the crucifix. Available exclusively at The Catholic Company! 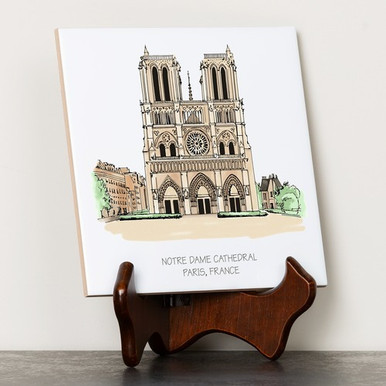 Timeless: A History of the Catholic Church

How do I “do” mental prayer?

What is the origin of the St. Michael prayer?

What supernatural event was witnessed by tens of thousands of people in 1917?

Fun Facts About Catholics and Coffee

Why should I use holy water?

What is the Golden Legend?

The day the Blessed Mother saved the Christian West

From Satanic “priest” to Apostle of the Rosary

Which saint’s father tried to take away his inheritance?

Which saints spoke to their guardian angels?