Which English bishop was martyred in his own cathedral?

Today we celebrate the feast of one of England’s greatest martyrs.

365 years before Henry VIII executed his former chancellor, Thomas More, for his refusal to acknowledge the King as the head of the Church in England, a different Henry and a different Thomas were engaged in a similar struggle.

Thomas à Becket was born in 1118 into a merchant family in London. After school he worked in secretarial positions before entering the service of the Archbishop of Canterbury, who sent him to study civil and canon law in Italy and France. The Archbishop then ordained him a deacon, appointed him Archdeacon of Canterbury, and soon after recommended him to the young King Henry II as chancellor.

Henry and Thomas became close friends. Thomas was not only a highly capable chancellor and Henry’s trusted advisor in all political matters, but the two were inseparable companions outside court, as well. Henry’s attempts to assert control over the Church and her clergy, however, would spell the end of this friendship.

Henry hoped that appointing his chancellor to the position of Archbishop of Canterbury would aid him in asserting the power of the crown. Thomas warned him, however, that things would not turn out as he wished.

Henry appointed him to the position anyway, and Thomas’s prediction came true.

As Archbishop, Thomas threw himself fully into the service of the Church. He resigned the chancellorship and, though always a moral man, pushed himself to new levels of austerity and cast off all the luxuries he had hitherto enjoyed. As he had promised the King, he was an ardent defender of the rights of the Church.

Things came to a head in 1164 with the Constitutions of Clarendon, a 16-point document which Henry promulgated to clamp down on the freedoms of the Church. One of the main points at issue was the right of the Church to try clergy in ecclesiastical courts without the interference of secular courts. Thomas refused to assent to the Constitutions and fled to France for six years.

Though at times it seemed that reconciliation might be possible, Henry refused to desist his power grabs. Thomas returned to England on December 2, 1170, but his disagreements with the King continued. At length, infuriated by his former friend’s inflexibility, Henry uttered some angry words which are popularly known as: “Will no one rid me of this turbulent priest?” though it’s not certain what he actually said.

It’s also not certain how much he meant it as a violent threat. But some of his knights took him at his word, and rode off to Canterbury. They slew the Archbishop inside his own Cathedral, while his dying words were: “For the name of Jesus and the protection of the Church I am ready to embrace death.”

As for Henry, he eventually saw the error of his ways. Four years after Thomas’s death, the King did public penance, scourging himself at the tomb of the saint, and was absolved.

If only Henry VIII had done the same—England might still be a Catholic nation! Through the prayers of Thomas à Becket, Thomas More, and all her many great martyrs, may she return to her ancient Faith once again.

Read more about this heroic martyr in Thomas Becket – Defender of the Church. Available today at The Catholic Company! 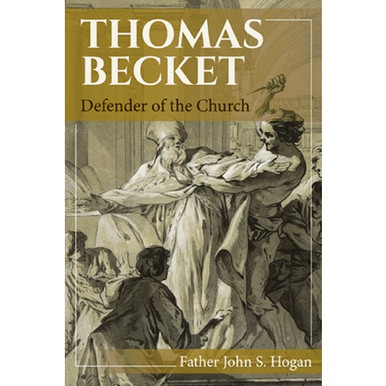 Thomas Becket – Defender of the Church