Who helped inspire Pope Pius X to lower the age for First Communion?

Ellen Organ never turned five years old, yet her love for the Blessed Sacrament raised her to the heights of sanctity.

Born in County Waterford, Ireland, in 1903, Ellen Organ—better known as Nellie—was the fourth child of poor but deeply devout Catholic parents. Her father William, facing unemployment early in his marriage, chose to become a soldier in the British Army rather than emigrate. The family was first stationed in Waterford, then in Cork.

Nellie’s mother, Mary, died of tuberculosis in early 1907, and William—facing the reality that he could not both work and care for his children—placed them in the care of religious communities. Nellie went to stay with the Good Shepherd Sisters, along with her sister Mary.

Here the “Little Violet of the Blessed Sacrament” spent the remainder of her life, both in profound suffering and in holiness that seemed beyond her years. Her angelic disposition and Heaven-sent intuition about spiritual things endeared her to the Sisters and convinced them that this was a very special child.

Nellie had a tender love for “Holy God,” as she had always called Him. She was particularly attracted to the Blessed Sacrament and knew early on exactly what—or rather, Who—this Sacrament was. She loved to see Our Lord enthroned in the monstrance, and she longed to receive Him. She would ask those who had been to Mass to kiss her so that she could participate in some way in their Communions.

But Nellie suffered from a grave injury to her spine, caused by a fall as a baby. This injury would cause her terrible pain, yet she did not complain, bearing everything with fortitude even though she was unable to walk much of the time and had to be carried. A painful jaw disease and eventually tuberculosis would also bring her life to an early close.

In view of her probable death and of her profound understanding of the Sacraments and the truths of the Faith, Nellie was able to receive her Confirmation, First Confession, and First Holy Communion, though she was far below the normal age. Her ecstasy upon receiving Our Lord for the first time and every time thereafter—32 times in all—was celestial.

Little Nellie died in February of 1908. Around this time, a white-robed man in Rome had been considering lowering the age for Holy Communion. According to a monsignor familiar with the matter, Pope Pius X heard about Little Nellie and, turning to his Cardinal Secretary, said, “There! That is the sign for which I was waiting!”

Quam Singulari, the decree lowering the age for First Communion, was promulgated in 1910.

Read more about Nellie in The Life of Little Nellie of Holy God. You will not only be amazed at the extraordinary graces with which God blessed this child, but your own love for the Blessed Sacrament will be renewed and purified by her angelic example. Pick up your copy today! 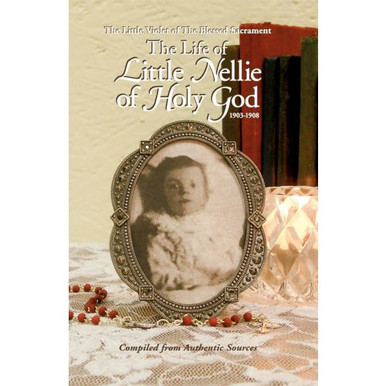 The Life Of Little Nellie Of Holy God: The Little Violet Of The Blessed Sacrament

Real Presence: What Does It Mean and Why Does It Matter?

How many countries did St. Francis Xavier visit?

What is the “Christmas Nail”?

An Advent tradition for young and old

It took 27 bullets to bring down this Marine chaplain

What is the St. Andrew’s Novena?

Why do Catholics confess their sins to a priest?