Who was Juan Diego?

Today we celebrate the feast of the humble visionary of Guadalupe.

Juan Diego was an Aztec Indian, a member of the Chichimeca people who spoke the language Náhuatl and lived near modern-day Mexico City. He was born in 1474, several decades before the Aztec Empire—with its dreadful gods and human sacrifices—met its match in Hernan Cortes in the 1520s.

In the subsequent evangelization of the region by Franciscan missionaries, Juan and his wife were some of the first converts to Christianity, baptized around 1524.

Juan was a hardworking, simple man, well-respected in his community. He was probably a widower by the time of the apparitions, caring for his aging uncle. He would travel long distances to hear Mass and attend catechesis.

It was on his way to church one day that he met Our Lady. She called him by name:

She used the affectionate form of his name. She called him “little Juan” or “little Juan Diego.” She spoke to him like a mother to a child, with love and tenderness.

Juan came from a world where such love between a heavenly being and mortal was unheard of. The Aztec Empire into which he was born was a place of cruel, bloodthirsty gods. Their “mother” earth goddess was a ghastly creature. The greatest god, the god of the sun, needed blood to live and bodies to help him fight the night.

But this heavenly Lady was nothing like them. She said:

“My son, I love you. I desire you to know who I am. I am the ever-Virgin Mary; mother of the true God who gives life and maintains its existence…I desire a church in this place where your people may experience my compassion…Here I will see their fears and I will console men and they will be at peace.”

And in a subsequent apparition:

“Am I not here who am your mother? Are you not under my shadow and protection? Am I not your fountain of life? Are you not in the folds of my mantle, in the crossing of my arms? Is there anything else that you need?”

Truly, this was a wondrous new era into which the Mexican people were then entering. Within the first several years after the apparitions, 9 million native Mexicans would convert—the largest mass conversion to the Faith of all time.

As for Juan, he spent the rest of his life in a cell near the chapel where the miraculous tilma was housed on Tepeyac. He swept the floor and talked to the pilgrims that flowed to the place. He died happy and peaceful in 1548.

Remember the wondrous story of Our Lady of Guadalupe and “Juanito” every time you pray her rosary with a Rose Guadalupe Rosary. The intricate clay beads recall the beautiful roses that Our Lady gave him as a sign to the bishop—the roses that fell to the ground and revealed the miraculous image on Juan’s tilma. Available today at The Catholic Company! 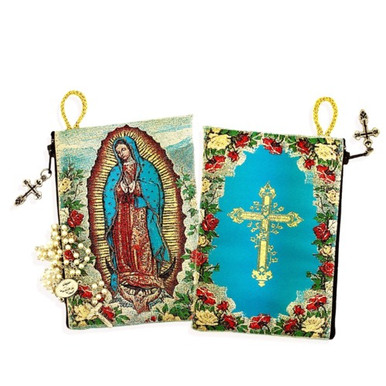 Our Lady of Guadalupe Rosary Pouch

Our Lady of Guadalupe Story Mug