Most Catholics are familiar with the Brown Scapular. But there are also black scapulars, green ones, even red and blue ones. What do the various colors symbolize?

Many of the scapulars with which we are familiar actually have their origins in religious orders, being a miniature version of the much larger scapulars worn as part of the religious habit. The smaller “lay” scapular is usually a sign of a person’s membership in an order’s confraternity: an association of faithful who are not members but partake in the spirituality and benefits of the order.

Let’s look at some examples. The Brown Scapular is one of the best-known Marian sacramentals. In 1251, Our Lady appeared to the English Carmelite St. Simon Stock and, giving him a brown scapular, said that anyone who wore this habit “would not suffer eternal fire.” The promise extends to the Confraternity, who wear a miniature version of the original brown Carmelite garment which covers the entire front and back of the religious habit.

An interesting example of a scapular that is not connected to a religious order is the Green Scapular, which was given by Our Lady in the 19th century to Sister Justine Bisqueyburu of the Daughters of Charity (the same order as St. Catherine Labouré, who had received the Miraculous Medal ten years earlier).

Through this scapular, Our Lady promised the grace of spiritual conversion to unbelievers and lapsed Catholics who would wear it and recite a short ejaculation to her Immaculate Heart. If an individual in need of conversion refuses to wear it, the giver can slip it into their belongings or under their pillow and recite the prayer on their behalf.

The fascinating world of scapulars is vast; we’ve only touched on a few of them here. The Brown Scapular is certainly the best known and loved and is certainly a highly-recommended devotion for every Catholic. If you do not currently wear it, we encourage you to pick one up here at The Catholic Company and ask your parish priest to enroll you in the Confraternity. Our 3-pack means you’ll have one for yourself and two to give away. Don’t miss out on the marvelous graces available to those who wear the Brown Scapular! 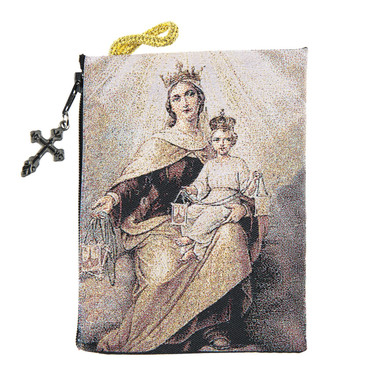