Why is St. Jude the patron of impossible cases?

Perhaps you’ve turned to this saint when all earthly solutions have failed.

St. Jude Thaddeus was one of the twelve Apostles, a relative of Our Lord and of St. James the Less.

While we don’t know much else for sure about him, various traditions say that he preached the Gospel in Edessa, Armenia, Mesopotamia, Libya, and Persia, where he suffered martyrdom with St. Simon the Zealot. He shares his feast today with St. Simon, and both are buried in St. Peter’s Basilica.

This epistle is one of the traditional sources for our devotion to St. Jude as the patron saint of hopeless cases. In this letter, he denounces the heretics and false teachers that have tried to corrupt the faith of the Christians he addresses. He encourages these Christians to stay strong, to “build yourselves up on your most holy faith,” and to wait for the mercy of Christ.

Interestingly, he also urges them to save those in spiritual danger, “snatching them out of the fire.” How many of us have prayed to St. Jude for a wayward loved one?

Another traditional origin for invoking St. Jude in hopeless cases is that his name is so close to that of Judas Iscariot that early Christians were afraid to invoke it. Indeed, you’d have to be desperate to do so.

Then, there is the testimony of Our Lord Himself. He revealed to St. Bridget of Sweden that He desired to foster devotion to St. Jude, saying:

“In accordance with his surname, ‘Thaddeus,’ the amiable, loving, he will show himself most willing to give help.”

St. Jude is now immensely popular in the Church for those in overwhelming predicaments. A desk-sized statue of St. Jude will remind you to bring your difficulties to this powerful saint—after all, he specializes in the impossible! Available right here at The Catholic Company. 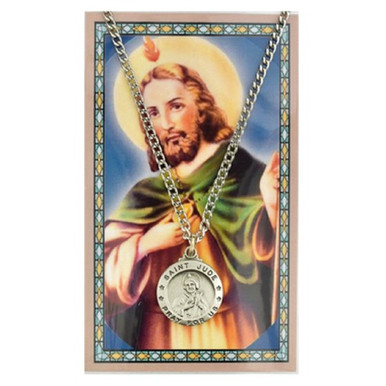 Who converted 200 Americans in a POW camp?

Why do we call Our Lady “Star of the Sea”?

What treasure is guarded by Tre Fontane Abbey?

Are priests ever allowed to break the seal of confession?