St. Francisco (1908-1919) and St. Jacinta Marto (1910–1920) were siblings and the youngest of the three shepherd children, who, along with their cousin, Lucia Santos, witnessed three apparitions of an angel in 1916 and six apparitions of the Blessed Virgin Mary in 1917 while tending sheep in the countryside of Fatima, Portugal. They were entrusted by Our Lady of Fatima with many messages and warnings for the world, and that they were to do penance and pray for the conversion of sinners.

Both became prayerful mystics, much wiser than their age, on account of these heavenly visits. The Blessed Mother told Francisco and Jacinta that they would die young and that she would soon come to take them to heaven. Although only young children, they faithfully offered up many sacrifices as Our Lady requested, by praying the rosary daily, giving their lunches to the poor, denying themselves water on hot days, wearing a rough rope next to their skin, calmly facing ridicule on account of the apparitions, and bravely enduring the suffering that ended in their deaths.

Read next: Five Prayers Taught at Fatima by Mary & the Angels

AFTER THE MIRACLE OF THE SUN

After the final apparition on October 13, 1917, in which tens of thousands of people witnessed the Miracle of the Sun, the three children attempted, as much as was possible, to return to their regular way of life. Which, of course, would never be normal again. They were forever changed, and left off their childish games and diversions in order to pray and meditate on all the mysteries that had been revealed to them.

The three children became closely attached, preferring one another to all other company, praying together and speaking to each other of all the things they had witnessed. Their time alone together was welcome repose as they were continually bombarded with visitors and questions regarding what they had seen and heard from Our Lady. Warned by Our Lady that they would have much to suffer, these annoyances became yet more offerings to the Immaculate Heart of Mary for the conversion of sinners.

For Francisco and Jacinta, they had simply to await the day when Our Lady would come to take them to heaven as she promised. Lucia, the eldest, Our Lady said, would remain for some time longer in order to spread devotion to her Immaculate Heart.

Francisco and Jacinta both contracted influenza in October 1918. After the siblings fell ill, Our Lady appeared to them again to inform them that she would come to take Francisco to heaven soon, and that Jacinta would follow not long after. Jacinta announced to Lucia,

“Look, Lucia, Our Lady came to see us and said that She was coming soon for Francisco. She asked me if I still wanted to convert more sinners. I said yes. Our Lady wants me to go to two hospitals but it is not to cure me. It is to suffer more for the love of God, the conversion of sinners and in reparation for the offenses committed against the Immaculate Heart of Mary. She told me that you would not go with me. My mother will take me there and afterwards I am to be left there alone.”

The influenza epidemic also struck Lucia's family, though she herself was spared. After taking care of her family's needs, she would go to the Marto house to visit with Francisco and Jacinta as they lay sick in their beds, knowing that her time with them was short. Jacinta said to her,

“I love Our Lord and Our Lady and I never get tired of telling Them that I love Them. When I tell that to Them, it seems sometimes that I have a fire burning in my breast, a fire that does not consume ... Oh, how I would like to be able to go again to the hills to say the Rosary in the Cave. But I can’t any more. When you go to the Cova da Iria, pray for me, Lucia! I’m sure I’ll never go there again. Now you go to Francisco’s room because I want to make the sacrifice of being alone.”

Lucia would write years later in her memoirs,

“Jacinta seemed to be interested only in the conversion of sinners; she wanted to save people from Hell, but Francisco’s only desire was to console Our Lord and Our Lady Who seemed to him so sorrowful.”

Francisco died first in 1919, and Jacinta the next year. 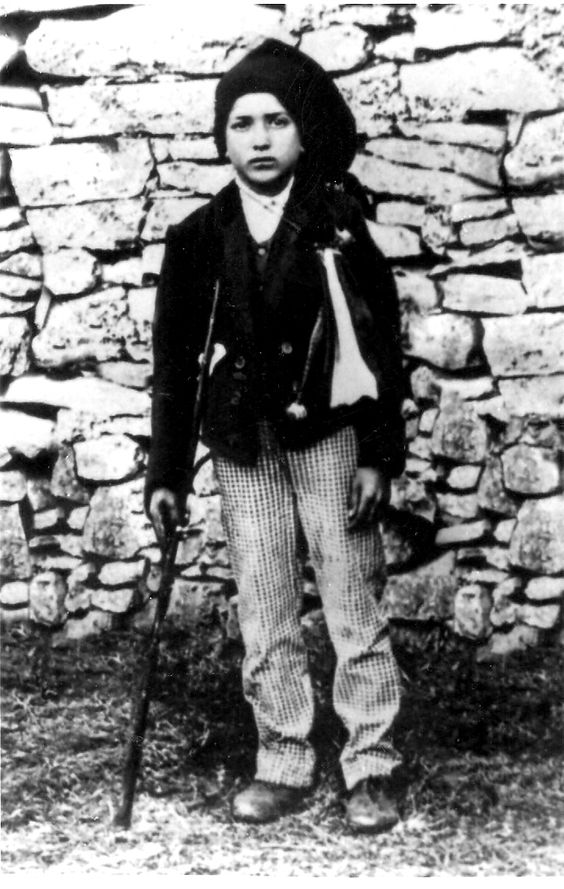 In her first apparition, Our Lady told Francisco that he would go to heaven on the condition that he prayed many rosaries. He took this message to heart, saying "I'll say as many rosaries as you want!"

In each of the apparitions the children experienced, Francisco could see all that the other two children could see, but he could not hear anything that was said. He relied on Jacinta and Lucia to share the messages with him, which he often had difficulty understanding as he had not yet learned his catechism. Yet, he still received the deep impressions of the Divine into his mind, heart, and soul that emanated from Our Lady, and often contemplated them.

“I liked to see the Angel so much, but I liked Our Lady much more. What I liked best about the apparitions was seeing Our Lord in that light that the Blessed Virgin put into our hearts. I love God very much. He is so sad because of so many sins. We must not commit even the smallest sin.”

Francisco obediently took all the medicines prescribed for his sickness without complaining, yet assured his family that he would soon die, no matter how much improved he seemed to become. When Lucia asked if he was suffering much, he replied,

“Yes, I am. I suffer it all for the love of Our Lord and Our Lady. I want to suffer more and I can’t."

This suffering continued for some time, and eventually he lost his strength and had to remain in bed.

“Look, Lucia, I’m going soon to Heaven. Jacinta is going to pray a great deal for sinners and for the Holy Father and for you. You’re going to stay here below because Our Lady wants you to. Do whatever She wants.”

The day of his death approaching, Francisco examined his conscience asked Lucia to help him remember any sins he had committed. He asked for forgiveness from all, commending himself to their prayers, as he could no longer pray for himself due to his sickness. He called for the priest to make his confession and to receive his First Holy Communion on his sick bed, with Jacinta and Lucia in attendance. The next morning he died. It was Friday, April 4th, 1919. 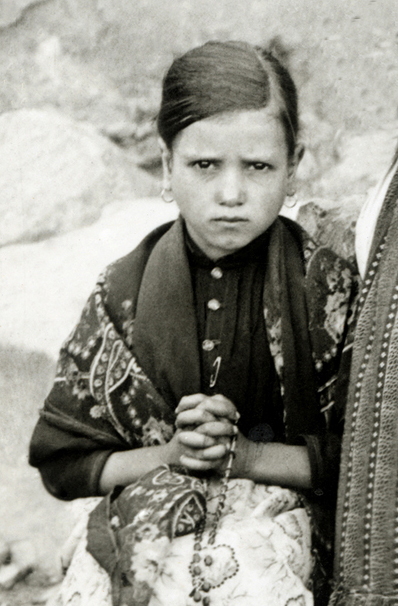 Lucia and Jacinta missed Francisco very much after his death, although they were assured that he was happy in heaven. Jacinta, knowing that she was to die next, encouraged Lucia who had to continue living without her closest companions.

"Don’t be afraid. I’ll pray a lot for you in Heaven, and for the Holy Father also, and for Portugal, for the war not to come here and for all the priests.”

Jacinta would often sit up to pray and think, motionless for hours and hours on her sick bed, puzzling her family with her behavior. Lucia was the only one with whom she would share these deep thoughts. Physically, an abscess had appeared on her chest and was growing. Yet, she happily offered up her pain,

“We must make many, many sacrifices and pray a lot for sinners so that no one shall ever again have to go to that prison of fire where people suffer so much.”

As Our Lady foretold, Jacinta was taken to two hospitals for treatment, the first visit was for a period of two months. Lucia was able to visit her there, reporting that,

“I found her as happy as always to suffer for the love of God and the Immaculate Heart of Mary, for the conversion of sinners and for the Holy Father. That was her ideal. That was all she spoke about.”

Her treatment unsuccessful, she was finally released back home. Like Francisco, Jacinta would make many small sacrifices throughout her illness, such as denying herself water, getting out of bed to kneel in prayer, and not turning over in bed during the night. She desired very much to attend daily Mass like Lucia, but was too sick to do so. Lucia would visit her daily on her way home from receiving Holy Communion. One one of these visits Jacinta said to her,

“Come very close to me for you have Our Lord in your heart. I don’t know how it happens but I feel Our Lord in me and I understand what He says even if I don’t see Him or hear Him. It is so good to be with Him.”

Jacinta's wisdom and depth of prayer was astounding. She received in a short time what Lucia would cultivate over a lifetime. Encouraging Lucia of her mission, she said,

Jacinta later went to the second hospital in Lisbon, first being told again by Our Lady that she would die there, alone, and to not be afraid. Before leaving for the hospital, her family allowed her one final visit to the Cova da Iria where Our Lady had appeared to the children. When Lucia asked Jacinta what she would do in heaven, Jacinta replied,

“I’m going to love Jesus a lot, and the Immaculate Heart of Mary, and pray and pray for you, for the Holy Father, my parents, brothers, sisters and for everyone who asked me and for sinners. I love to suffer for the love of Our Lord and Our Lady. They love those who suffer for the conversion of sinners.”

Jacinta was taken in by the Mother Superior at the Our Lady of the Miracles orphanage, and was well-cared for. Jacinta was delighted to live under the same roof as Jesus in the Eucharist kept in the chapel Tabernacle. While there she would instruct the other children on how to please God. Our Lady continued to appear to her there as she awaited being taken to the hospital, sharing many things with the Mother Superior:

"The sins of the world are too great. If only people knew what eternity is, they would do everything to change their lives. People lose their souls because they do not think about the death of Our Lord and do not do penance."

At the hospital the doctors insisted on operating on Jacinta, despite the child's firm announcement that it was useless. Yet, she willingly suffered this in obedience to Our Lady and to offer up her suffering for the conversion of sinners. Due to her weakness, she was only given a local anesthesia as the surgeon removed two diseased ribs from her chest.

Jacinta knew the very day and hour of her approaching death, and wrote to Lucia to warn her ahead of time. As the day drew closer, Our Lady visited Jacinta again and took all her pains away, much to the surprise of her doctors. On the evening of her death, Jacinta called for a priest to give her Last Rites. He heard her confession and promised to bring her Holy Communion the next morning, not seeing any need for immediate action despite the child's insistence. That night, Jacinta died in her hospital bed while under the care of a nurse. The date was February 20th, 1920.

Read next: How to Live the Message of Our Lady of Fatima 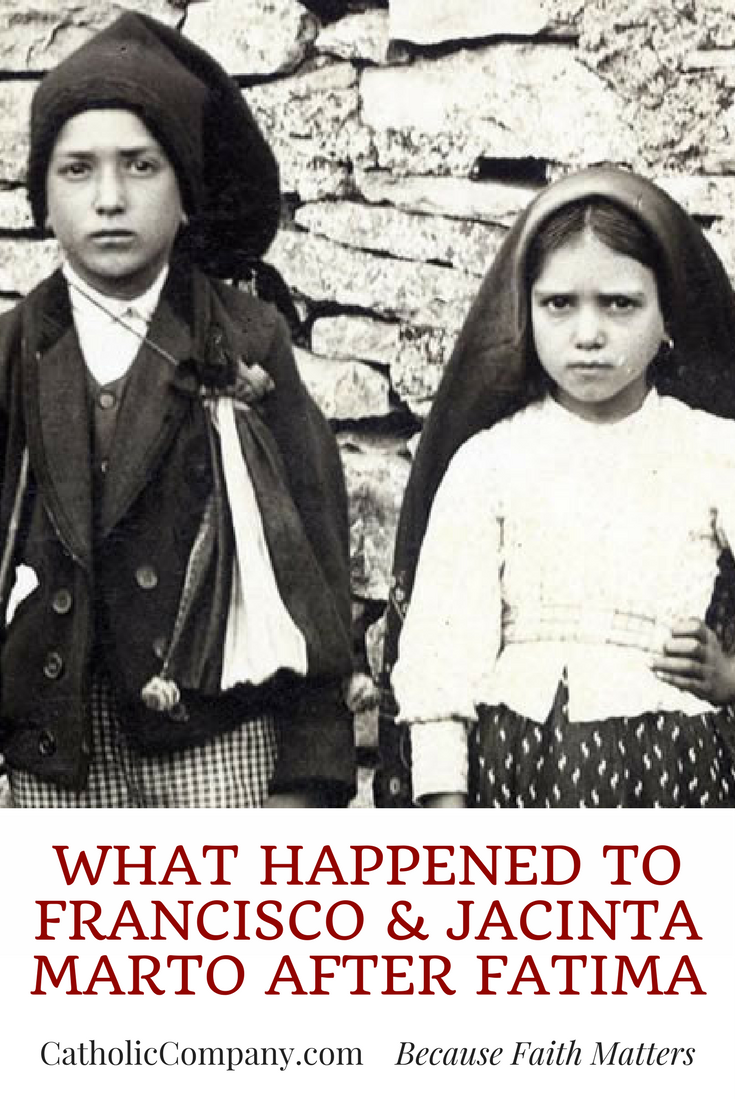