Easter is a glorious time to be Catholic. There is nothing more wonderful to participate in than the various liturgies of the Easter Triduum, the holiest time of year. This is the solemn three-day period, from the night of Holy Thursday to the Easter Vigil, when the Church accompanies her Savior in His Passion, death, and resurrection.

Read Understanding the Sacred Triduum: What is it?

What made the Triduum even more special this year is that the date lined up with the traditional date of the Crucifixion - Friday, March 25th - which is also the date of the Annunciation. Read more about this liturgical coincidence in this fascinating article here.

Below is my "scrap-blog" journey through the Triduum in pictures, I hope you enjoy!

The Easter Triduum begins with the Mass of the Lord's Supper on the evening of Holy Thursday. This is when Jesus instituted the priesthood, the Holy Sacrifice of the Mass, and the Holy Eucharist on the night before His crucifixion. All the holy images in our sanctuary had been covered in purple penitential veils since Passion Sunday.

Read A Lenten Tradition: Veiling the Cross for Passiontide

Mass doesn't end on Holy Thursday, rather it is left "open-ended" as the liturgy continues on for the next two days. Instead of the final blessing, the altar is stripped and the Blessed Sacrament is removed from the Tabernacle. The ciborium is processed to an altar of repose where Our Lord will spend the night away from the main altar. 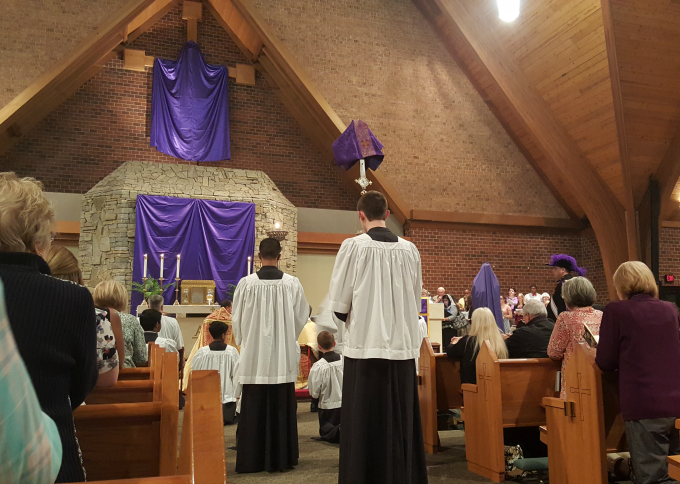 The whole parish processes with Jesus in the Eucharist to this resting place, which is a similitude of the night He spent in agony in the Garden of Gethsemane. We accompanied Him, while singing the Pange Lingua, and knelt down as He was temporarily placed in a different Tabernacle at the altar of repose in our parish hall. 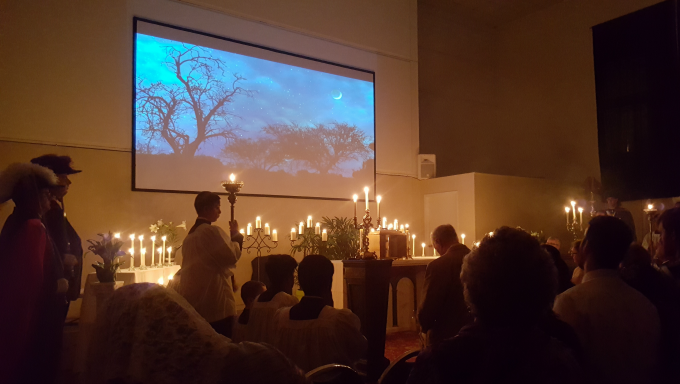 The Fathers did a great job making us feel like we were in the Garden with Jesus. It was beautiful! Many stayed in silent adoration until midnight, at which time the Blessed Sacrament was removed and hidden out of site for Good Friday, symbolizing Jesus' death and burial. 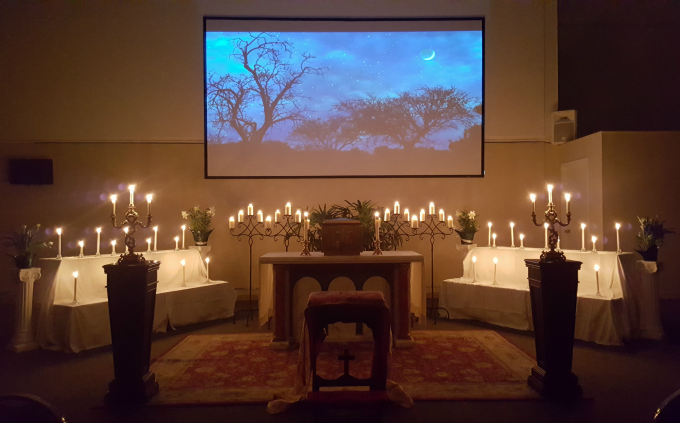 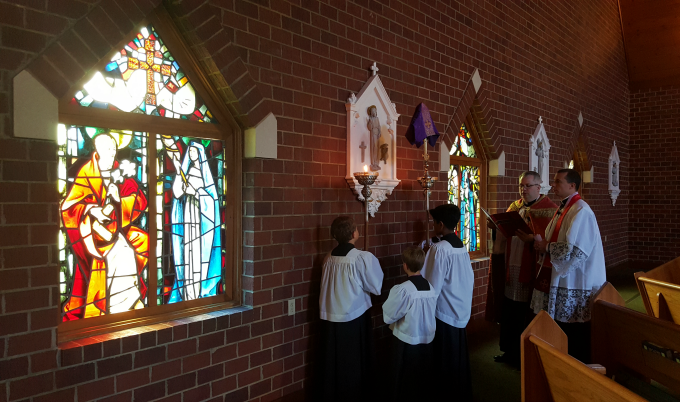 At 3pm, the hour that Jesus died on the Cross, we had the Veneration of the Cross ceremony included as part of a Communion service. The priests begin the service in prostration before the altar. During the Liturgy of the Word the whole parish reenacts the entire Passion narrative from the Gospels, with everyone reading it in their parts as if it were a play. The part of Jesus was read by the priest, while the worshipers read the parts of the crowd, culminating with, "Crucify Him! Crucify Him!" It is quite remarkable to place yourself among that crowd, shouting for Jesus to be crucified on Good Friday, knowing that it was for your own sins that He suffered and died. 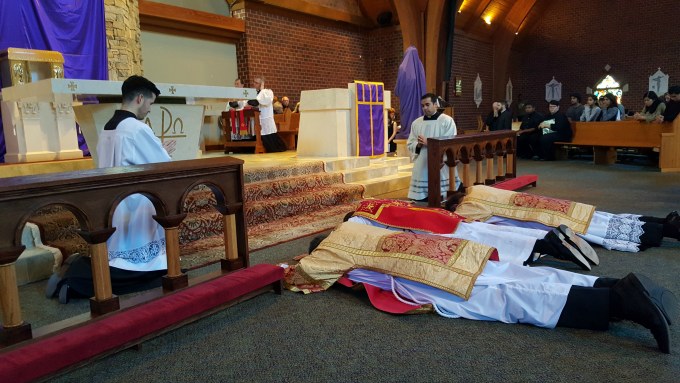 After the homily the wooden cross is processed into the Church veiled with a cloth and slowly revealed to the chanting of the choir. The priests and the faithful then line up to venerate the cross with either a touch or a kiss. 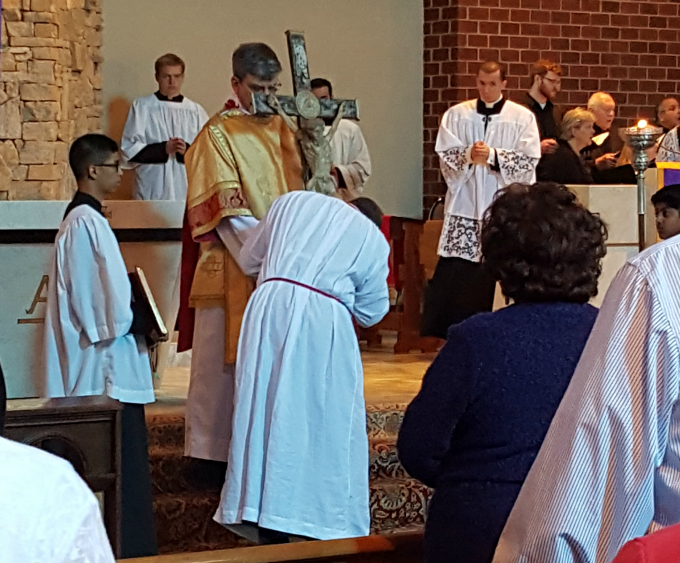 The crucifix we used for the veneration is hundreds of years old, believed to be from the 16th century or earlier. After veneration it was placed at the foot of the altar underneath the empty tabernacle. 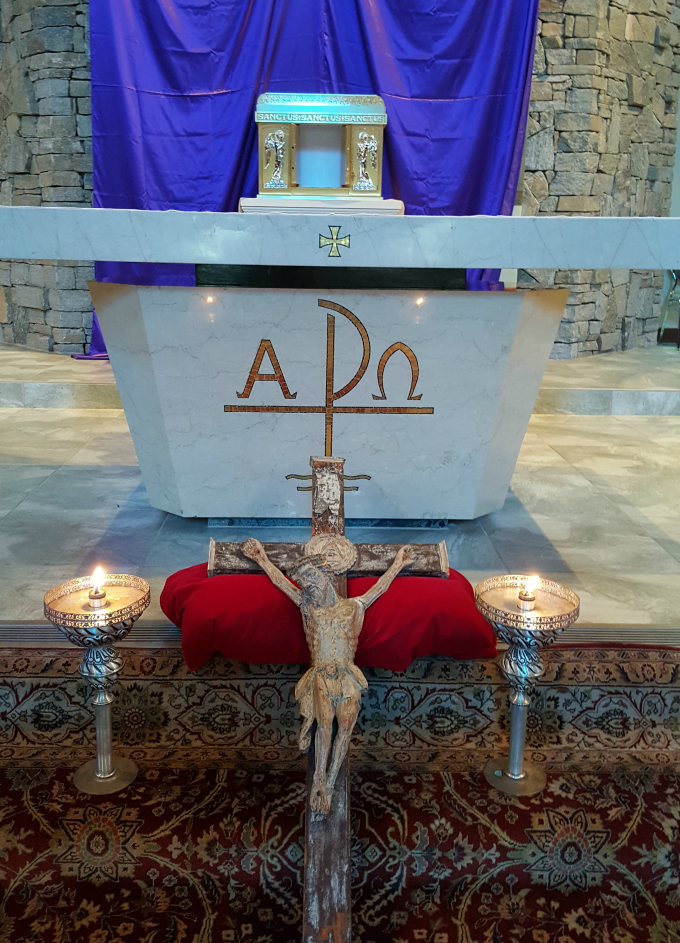 The parish was surprisingly packed for the 3pm Good Friday service, and it lasted about two hours. Everyone was quiet and solemn as they moved up one by one to touch or kiss the crucifix. 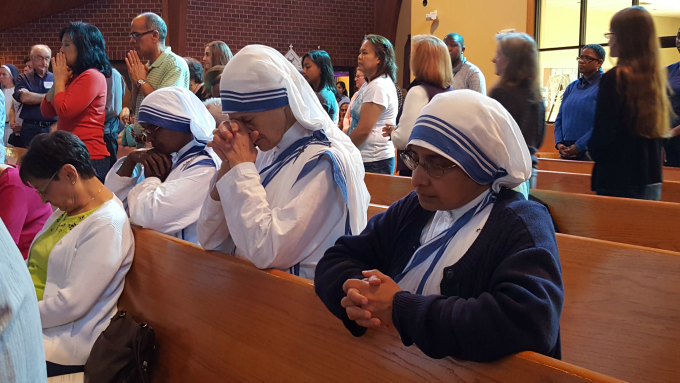 After the veneration, Holy Communion was distributed. Although there is no Mass, extra hosts were consecrated on Holy Thursday to be consumed on Good Friday. The crucifix was left on display for the remainder of the day. 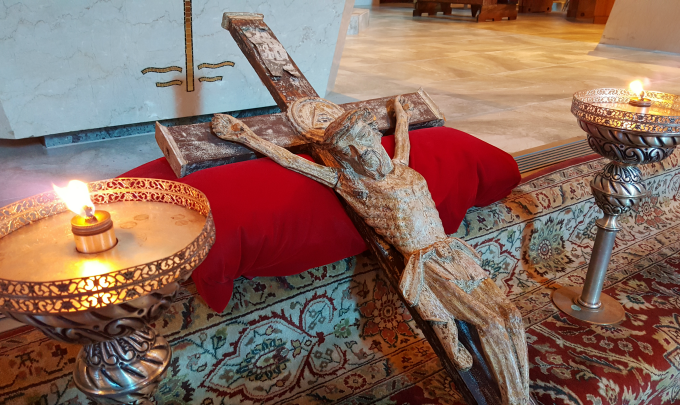 We are blessed to have a Ukrainian-Greek Catholic mission using our small chapel, and they have their own beautiful liturgies for the Easter Triduum. At 6pm on Good Friday they had their Vespers service followed by the Veneration of the Burial Shroud. 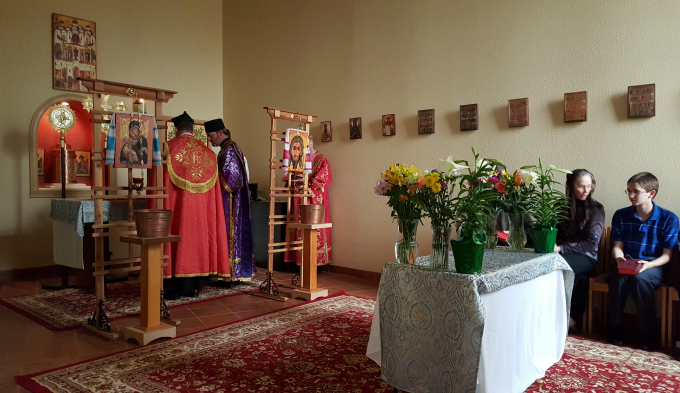 This is a piece of cloth with an icon of Jesus as He would be laying on his burial cloths. This liturgy recalls that on the evening on Good Friday (which they call Great and Holy Friday) Jesus was taken down from the Cross and carried to His tomb. The Burial Shroud is processed around the church, as the faithful follow behind chanting prayers, before being laid on a table representing the Holy Sepulcher or tomb. 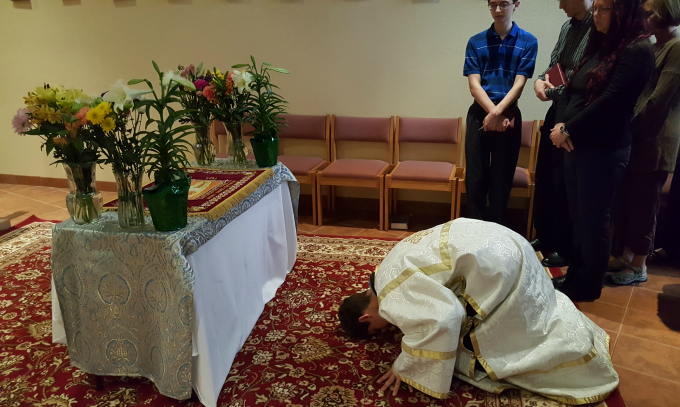 The faithful make a profound bow before the Burial Shroud three times before going up to kiss it.

The cloth icon of the Burial Shroud of Jesus used in the Byzantine rite venerated at Vespers on Good Friday.

The last liturgy on Good Friday was Tenebrae (Latin for 'shadows'). This is the Divine Office Vespers liturgy prayed during the Triduum in the Roman rite. It was my first time attending this liturgy, and it was pretty amazing. The office is chanted back and forth between the two sides of the church in choir formation, including sung lamentations in traditional mourning style. It was incredibly beautiful, yet also a bit eerie and chilling. This is basically the Church in mourning after Jesus has died on the Cross. 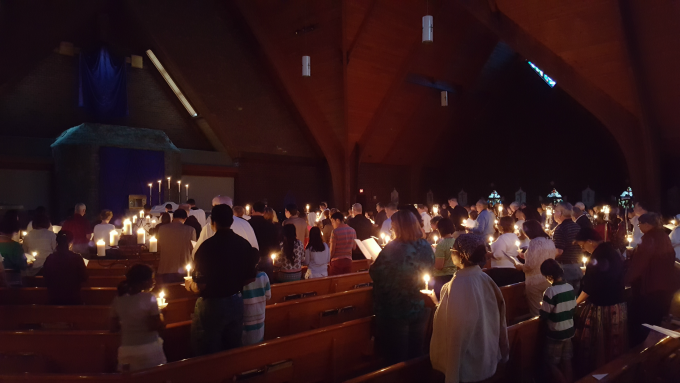 As the prayer progresses, the candles at the altar are blown out one at a time after each reading. After the last candle is extinguished the whole church goes dark. Everyone then pounds loudly on the wooden pews in a simulation of the darkness and earthquake that happened after Jesus expired on the Cross - and that is how Tenebrae concludes. 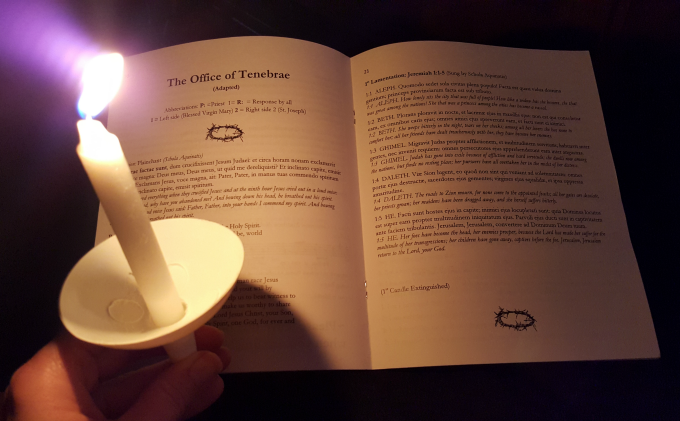 It was really quite jolting, and definitely communicates the reality of what happened at the Cross. Jesus Christ has just died. People then leave to go back to their homes in complete silence. 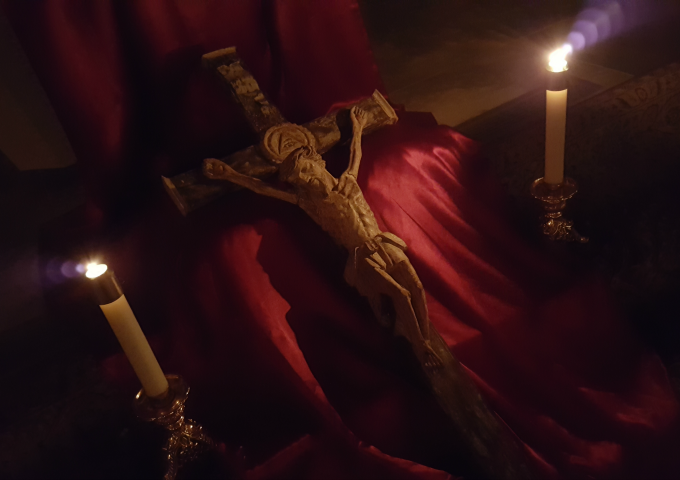 The next morning was Holy Saturday. Jesus is in the tomb, and there is little activity happening, aside from the Divine Office, as the Church awaits the Easter Vigil. Since I'm part of the RCIA team, we met with all the catechumens and candidates that morning for the Easter Vigil practice.

The Easter Vigil lasts about three hours and has a lot of moving parts, almost like a dance as our priest says, and it takes quite a lot of preparation and coordination for everything to go smoothly. This year our parish had 26 people receiving one, two, or all three of the Sacraments of Initiation: Baptism, First Holy Communion, and Confirmation. 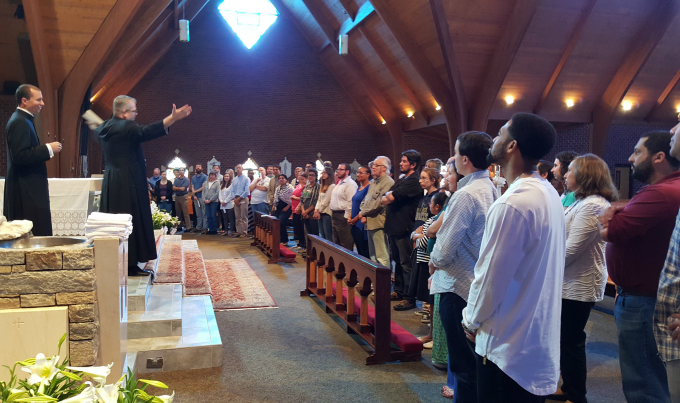 The Easter Vigil began at 8pm with the lighting of the Easter Vigil fire. This fire represents the Light of Christ who is now raised from the dead, destroying death itself, and this light is given to the Church through the Sacraments. The tall Easter candle is marked with the current year and lit by the priests, while all the faithful light their processional candles from the Easter candle. 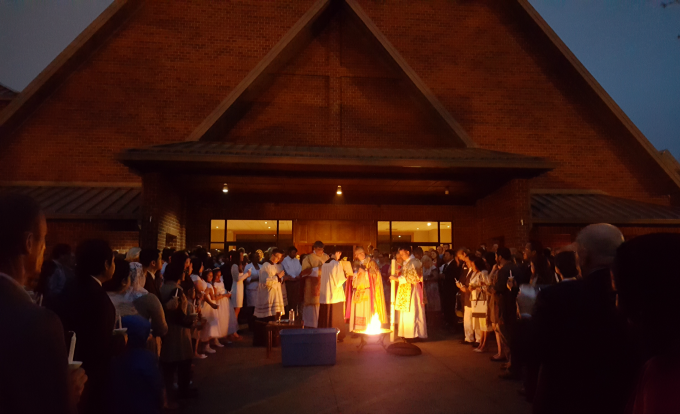 After gathering around the Easter fire to light their candles, the faithful process into the pitch black church. The church slowly fills with light as the faithful make their way to the pews. This symbolizes the light of Christ spreading to all the world through the faithful who keep His flame burning. 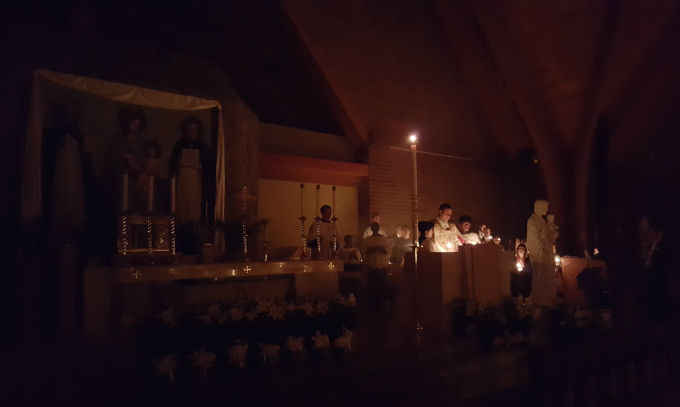 After the Scripture readings the Easter candle is dipped into the baptismal font three times in preparation for those who are about to be baptized with that water in the name of the Father, the Son, and the Holy Spirit. 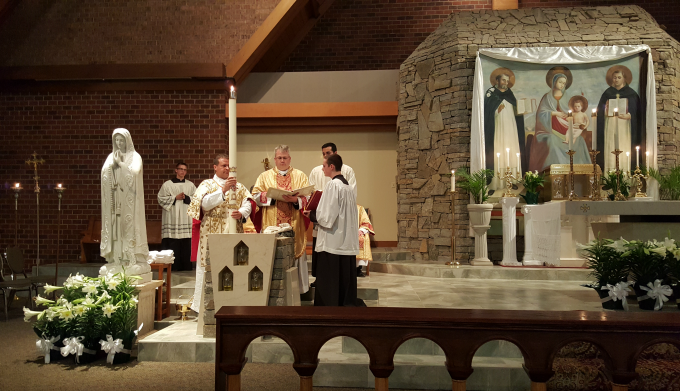 Our whole RCIA group at the foot of the altar about to receive their Confirmation. Those who have just been baptized are holding their lighted baptismal candles symbolizing the effect of the Sacrament they have just received in their souls. 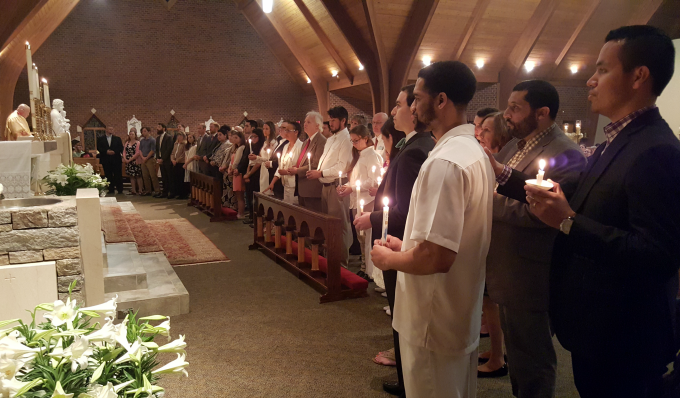 At the Easter Vigil the altar is entirely transformed. The purple veils are removed and all is adorned in white. White Easter lilies are scattered around the sanctuary. 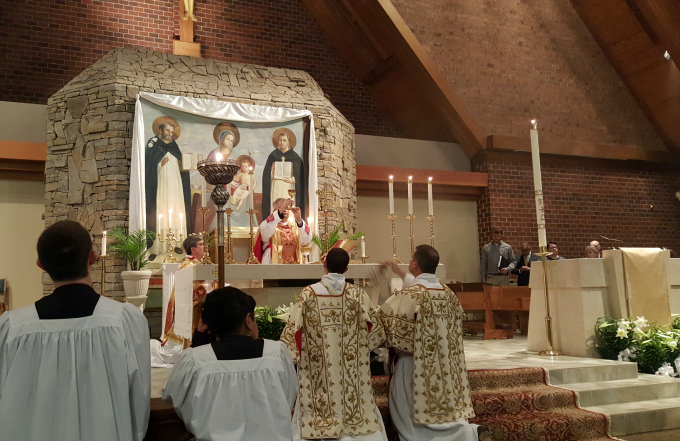 Here's a group picture of all our new Catholics! I'm so happy for them! 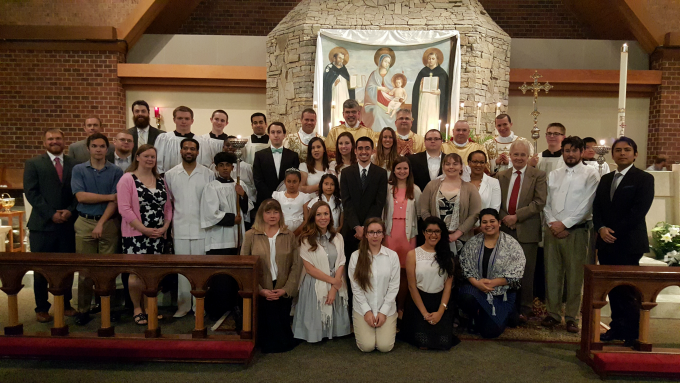 What is your favorite part of the Triduum? For me, I have to say it's the Easter Vigil. There is nothing I love more than seeing new people welcomed into the fullness of Christian truth in the one, holy, catholic, and apostolic Church! 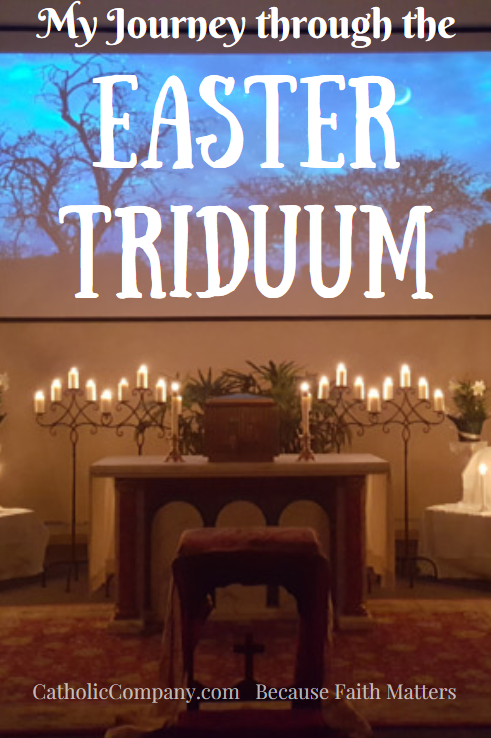