December 13th is the feast day of St. Lucy. St. Lucy was a virgin martyr during the earliest centuries of Christianity under its worst persecution at the hands of the Roman Empire, therefore making her one of the most glorious saints in heaven.

She is of such renown that she is one of the saints mentioned by name in the Roman Canon of the Mass, one of only seven female saints listed.

Lucia means “light,” a fitting name for a young woman who was known to visibly glow and radiate in her love for her spouse, Jesus Christ. Falling during the Advent season—and thus a long, dark winter—there are many beautiful traditions associating this saint with the meaning of her name, the story of her life, and her glorious position in heaven. Her feast day is celebrated with candles, torches, and even bonfires.

In some Catholic cultures (especially in Scandinavia) it's common to have a Mass procession on St. Lucy's feast day with young girls carrying candles, with the lead girl wearing a wreath of lights (which looks similar to an Advent wreath).

Tradition holds that St. Lucy would wear a wreath of candles on her head so she could see better, her arms full of supplies, as she served the poor Christians hiding from persecution in the dark underground catacombs.

Many countries have special St. Lucy's day traditions, but perhaps the most well-known are the ones of Italian and Scandinavin origin.

According to this resource, in Sweden,

“The oldest daughter of a family will wake up before dawn on St. Lucy's Day and dress in a white gown for purity, often with a red sash as a sign of martyrdom. On her head she will wear a wreath of greenery and lit candles, and she is often accompanied by 'Star Boys,' her small brothers who are dressed in white gowns and cone-shaped hats that are decorated with gold stars, and carrying star-tipped wands. 'St. Lucy' will go around her house and wake up her family to serve them special St. Lucy Day foods” which were usually baked sweets.

One simple way to incorporate a St. Lucy's day sweet treat into your family is with St. Lucy's bread.  Read one family's fun and easy St. Lucy day tradition (perfect for young girls!) here and here.

THE LIFE OF ST. LUCY

To celebrate her feast you can also read more about St. Lucy's fascinating and inspiring life from a detailed account written by one Catholic parish who enjoys her at their patron saint:

The story of St. Lucy is connected with a period of great political uncertainly and anxiety in the Roman Empire. It was an anxious time as the enemies of the Roman Empire attacked on all sides. After 400 years, the Roman Empire was declining under the constant onslaught of its enemies.

Diocletian (Caius Aurelius Valerius Diocletianus, 245-313) became the Emperor in 284 and set about trying to regain Rome’s former power and glory.  Diocletian would celebrate Rome’s last great military victory over its ancient enemy, the Persian Empire. Other victories came on the Germanic border but these victories would not bring peace to the Empire.

It was into this time of great anxiety that Lucy was born, in Syracuse, Sicily; into a rich and noble Roman family about the year 283. Her father, a patrician, died when she was five years old. That left her dependent upon her sickly mother Eutychia, who was of Greek descent. This is not surprising considering Syracuse was originally a Greek city and at one time the richest Greek city in the Greek Empire.

Lucy raised a devout Catholic, privately decided in her teenage years to consecrate her virginity to God, and devote her worldly goods to the service of the poor. However, Eutychia, not knowing of Lucy’s promise and suffering from a bleeding disorder feared for Lucy’s future. She arranged Lucy’s marriage to a young man of a wealthy pagan family. Lucy had to do something. Continue reading the Life of St. Lucy. 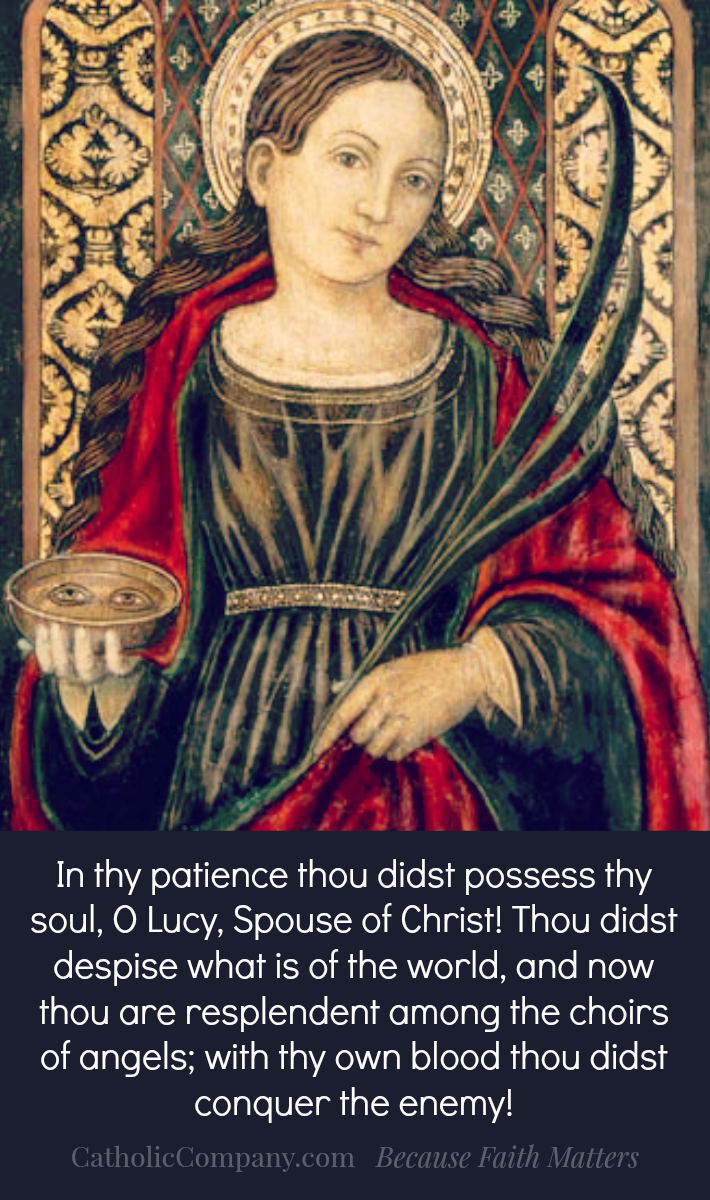 St. Lucy's feast day is associated with many wonderful Catholic traditions. Consider incorporating them into your family, or even into your parish, as a new way to celebrate saint feast days that fall during the Advent season.

If you celebrate a St. Lucy Day tradition in your family, please comment below and tell us about it!

In thy patience thou didst possess thy soul,

Thou didst despise what is of the world,

and now thou are resplendent among the choirs of angels;

with thy own blood thou didst conquer the enemy!

~Antiphon from the Divine Office for the feast of St. Lucy

This article has been updated and was first posted in December 2012. Copyright (c) The Catholic Company. All rights reserved.