How to Choose a Catholic Missal

Roman Catholics follow along with what’s happening during Holy Mass with a Catholic Missal. Missals are great to use for those Catholics who, “desire to live and pray every day in the spirit of the liturgy” according to the Constitution of the Sacred Liturgy.

You’ll usually find a missal in parish pews so everyone can follow along with what is being read and prayed on the altar. However, many people like to have their own personal missals for the following reasons:

1) The pew missals are often bent, torn, or sometimes there aren’t enough to go around. Carrying your own with you then becomes a preferred alternative.

2) The pew missals are often compact, so they contain limited Mass readings.

3) Having your own missal is perfect for following along with the daily mass readings at home even if you can’t make it to daily mass.

Missals can be pricey, but keep in mind that it’s a treasured book that joins the Catholic with the prayers and feasts of the Church throughout the year. It becomes an investment in your faith that is also practical: you can use it for decades and bring it to any parish you visit. All of the missals that we sell at The Catholic Company can be personalized with a name on the front, making it a great gift choice too.

So, how do you know which missal to choose?

There are generally two kinds of missals: Sunday Missals and Daily Missals.

Sunday Missals contain Mass readings only for Sundays throughout the liturgical year. For those who attend Mass primarily on Sundays (a Holy Day of Obligation) this is an adequate missal to use.

Daily Missals contain the Mass readings for every day of the liturgical year. This is the best choice for those who attend daily Mass or who follow the daily readings at home.

Of the varieties of Daily Missals and Sunday Missals available, the three most popular for the Ordinary Form of the Roman Rite are the Daily Roman Missal, the Saint Joseph Missal, and the Saint Paul Missal. 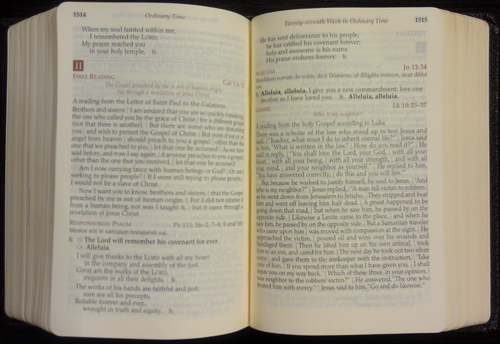 The Daily Roman Missal contains the complete prayers, antiphons, and readings (A, B, C cycle for Sundays, two-year cycle for weekdays) for all Masses throughout the liturgical year and the Order of the Mass all in one volume. Short explanations from the Catechism of the Catholic Church are given above the Sunday readings. It also contains English and Latin texts side by side for the Order of the Mass and the Eucharistic prayers, making this a great missal to use when Mass is said in Latin. It contains a liturgical calendar in the front that helps you locate the appropriate readings for the year and month. It has many other features such as the Proper of Saints, Masses and Prayers for various needs and occasions. It also has a very helpful section of Catholic devotions and common prayers in the back, and guides for the Sacrament of Reconciliation. Six colored ribbons are included for ease of use. 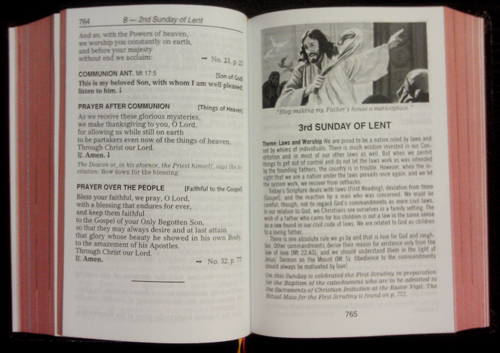 The Saint Joseph Missal comes in a Sunday Missal one-volume version and also a three-volume missal set for weekdays and Sundays.

The Saint Joseph Sunday Missal includes the complete 3-year Sunday cycle (A, B, C) including holy day masses and readings. It also contains a liturgical calendar in the front. It’s accented with full-color illustrations of various biblical scenes in addition to smaller black and white images. It also has common prayers in the back. This is a good choice for older children who can follow along with the Mass on their own. The Sunday version is black text on white paper with red page edges to match the red cover with two colored ribbons to hold your place. The three volume set includes the Sunday missal plus a two-volume weekday missal. The three volumes ensure that you only carry a lighter and thinner book to Mass for that day, rather than the much thicker all-in-one daily missals. All three volumes are bonded leather with convenient zipper closures and comes in a gift box. 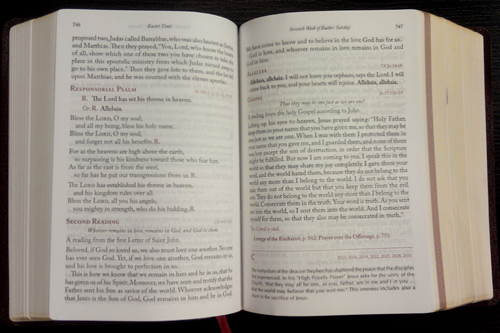 The Saint Paul Daily Missal is promulgated by the Daughters of St. Paul. The Saint Paul Daily Missal has the Order of the Mass and complete readings and prayers (cycles A, B and C) for all Sundays, weekdays, saint feast days, and holy days of obligation in one convenient volume. This missal also has short spiritual reflections on each day's readings, and introductions to the liturgical seasons are provided to enhance prayerful participation in the liturgy. A section of common prayers is included as well. It comes handsomely bound in a durable leatherflex cover with gilded page edges, and four ribbon markers.

No matter what your preference, there is a missal that’s right for you!

How to Use a Catholic Missal

Once you receive your missal, you'll need to know how to use it. Watch the video below for a detailed explanation on how missals work. No matter which style you choose, this guide should be helpful as most missals have a similar format.