Answers to Your Divine Mercy Questions

How to Pray the Divine Mercy Chaplet

What exactly is Divine Mercy?

Divine Mercy is Jesus' message to us that His Love and Forgiveness is greater than our sins. All He asks is that we trust in Him, ask for and accept His Mercy, and then let Mercy work through us to help others. He also wants us to be merciful, loving, compassionate, and forgiving to others.

What was the name of the saint who helped spread the Divine Mercy message? 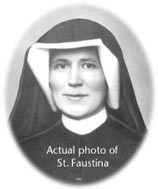 How did Saint Faustina learn about the Divine Mercy?

On February 22, 1931, Jesus appeared to Saint Faustina for the first time. For four years she recorded Jesus' words, her visions, and her own thoughts and prayers in a personal diary. She writes: 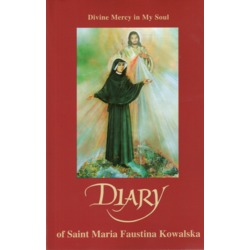 "In the evening, when I was in my cell, I became aware of the Lord Jesus clothed in a white garment. One hand was raised in blessing, the other was touching the garment at the breast. From the opening of the garment at the breast there came forth two large rays, one red and the other pale. In silence I gazed intently at the Lord; my soul was overwhelmed with fear, but also with great joy. After a while Jesus said to me, 'paint an image according to the pattern you see, with the inscription: Jesus, I trust in You.

"The pale ray stands for the Water which makes souls righteous; the red ray stands for the Blood which is the life of souls. These two rays issued forth from the depths of My most tender Mercy at that time when My agonizing Heart was opened by a lance on the Cross....Fortunate is the one who will dwell in their shelter, for the just hand of God shall not lay hold of him."

In visions that followed, Jesus asked Saint Faustina to be His instrument for spreading the message of His Mercy to all the world.

What is the Divine Mercy Chaplet?

The words of the Divine Mercy Chaplet were given to Saint Faustina after seeing visions of Jesus' crucifixion and of God's blessing the earth because of His sacrifice. It is prayed on a chaplet or ordinary rosary beads.

How do you pray the Divine Mercy Chaplet?

The Chaplet of Divine Mercy

(For recitation on a chaplet or ordinary rosary beads)

Begin with the Sign of the Cross. Continue by saying one Our Father, one Hail Mary, and the The Apostles Creed.

Then on the OUR FATHER BEAD you will say the following words: Eternal Father, I offer You the Body and Blood, Soul and Divinity of Your dearly beloved Son, Our Lord Jesus Christ, in atonement for our sins and those of the whole world.

On the 10 HAIL MARY BEADS you will say the following words: For the sake of His sorrowful Passion, have mercy on us and on the whole world.

Continue in this pattern four more times as you go around the chaplet or rosary. In conclusion THREE TIMES you will recite these words:

Holy God, Holy Mighty One, Holy Immortal One, have mercy on us and on the whole world.

"Say unceasingly this chaplet that I have taught you. Anyone who says it will receive great Mercy at the hour of death. Priests will recommend it to sinners as the last hope. Even the most hardened sinner, if he recites this Chaplet even once, will receive grace from My Infinite Mercy. I want the whole world to know My Infinite Mercy. I want to give unimaginable graces to those who trust in My Mercy...."Sept 13, 1935

According to Saint Faustina's diary, Jesus asked that the first Sunday after Easter be designated as the "Feast of Divine Mercy". He promised that on this day His Mercy would be overflowing to those who would ask for it. On Sunday, April 30, 2000, Pope John Paul II that the Sunday after Easter officially be known as "Divine Mercy Sunday."

Jesus also requested a Divine Mercy Novena to begin on Good Friday in preparation for the Feast of Divine Mercy. Jesus asked that each day of the novena focus on a special intention.

"On each day of the novena you will bring to My heart a different group of souls and you will immerse them in this ocean of My mercy ... On each day you will beg My Father, on the strength of My passion, for the graces for these souls."

Why is the date for Divine Mercy Sunday different from year to year?

Is it possible to get an Indulgence for participating in the Divine Mercy Novena?

Indulgences are often a source of confusion for Catholics and non-Catholics alike, so let's take a minute and make sure everyone is clear about the definition of "indulgence".

In the bible, sin is viewed as having two basic consequences: guilt and punishment. Guilt is washed away when a person seeks forgiveness, however the need for punishment remains. To completely clear away sin the person must perform an action that will work towards healing the wounds his sin has caused. For example, if a child takes a piece of candy from the store he must apologize to the store manager (to cleanse his guilt) and also pay for the candy (to satisfy the punishment).

The bible also views punishment as having two basic categories: eternal (forever) or temporal (for a short time). For example, when the Jews disobeyed God during their time in the desert the Lord became angry with them and wanted to destroy them (an eternal punishment). Moses pleaded with God who agreed to allow the Jews to live. He forgave their sins (their guilt) but the need for punishment remained. No one in that generation would be allowed to enter the promised land (a temporal punishment).

Both a plenary and partial indulgence are available for people participating in the Feast of Divine Mercy. The Apostolic Penitentiary of the Holy See granted the indulgences on June 29, 2002. To obtain a plenary indulgence the faithful must complete the following:

1. Sacramental Confession within 8 days before or after Divine Mercy Sunday

2. Eucharistic Communion on Divine Mercy Sunday (or the vigil Mass)

3. Participate in the prayers and devotions at church or in a chapel celebrating Divine Mercy or recite the Our Father, the Apostles' Creed, and a prayer such as "Jesus, I trust in You".

If you are unable to complete the requirements for a plenary indulgence (due to sickness or other serious reason) you may obtain a partial indulgence by praying with a contrite heart to the Merciful heart of Jesus a prayer such as "Jesus, I trust in You."

What else is known about the life of Saint Faustina?

Helena Kowalska (Saint Faustina) was born on August 25, 1905 in a village named Glogowiec in Poland. She had nine brothers and sisters and was the third eldest child. On August 1, 1925 she journeyed to Krakow, Poland to join the Congregation of the Sisters of Our Lady of Mercy whose mission was to educate and care for young women in need. The next year she received her habit and her name. She had a special devotion to the Immaculate Heart of Mary, to the Blessed Sacrament, and to the sacrament of Reconciliation. She contracted tuberculosis and died at the age of 33 on October 5, 1938. She was beatified by Pope John Paul II on April 18, 1993 and canonized on April 30, 2000 (Mercy Sunday) to became this Millennium's first saint!

Is it true that devotion to the Divine Mercy was banned at one time?

While serving as Cardinal of Krakow, Karol Wojtyla (Pope John Paul II) worked diligently and succeeded in having the ban on Saint Faustina's writings lifted. As a pope, John Paul II focused his second encyclical on the Divine Mercy in "Dives in Misericordia" (The Mercy of God). On June 7, 1997, the pope visited Faustina's tomb while on a visit to Poland and stated that the Divine Mercy had "formed the image of his pontificate."