During America’s founding, there was a lot of hostility towards Catholics. However, there was one openly practicing Catholic who played an essential role in the establishment of this nation.

We don’t hear much about Catholic participation in the American War of Independence.

The truth is, Catholicism had suffered through a rough history in the British colonies up to that point. Various anti-Catholic laws had shut Catholics out of public life in many of the colonies, and in some cases barred the presence of Catholics and/or their clergy altogether.

Even the state of Maryland, named for Henrietta Maria, the Catholic Queen Consort of Charles I, was supposed to be a haven for Catholics—but anti-Catholic legislation found its way there, too. The New World wasn’t the promised land of religious freedom if you were a Catholic.

In fact, the Declaration of Independence was signed by non-Catholics—with one exception.

Meet Charles Carroll, the one and only Catholic signer of the Declaration of Independence and one of Maryland’s most famous sons. Wealthy and well-educated, he was technically not allowed to hold office in Maryland due to his religion.

In spite of that, he was appointed to many positions and duties within the colonial government of Maryland, became one of the colony’s foremost promoters of independence, and represented Maryland at the Continental Congress. He put his name to the Declaration and gave a significant amount of his own fortune to financing the Americans in their war against England.

Charles Carroll’s story shows the giant cracks that were appearing in the anti-Catholicism of the American colonies—and these cracks would continue to grow.

George Washington was in favor of liberty for Catholics, and anti-Catholic legislation would gradually fall away as the new country took shape. Catholics would continue to fight against prejudice for the following centuries, for Catholicism was here and it wasn’t going away.

Alexis de Tocqueville, in his 19th-century observation of the American way of life Democracy in America, discussed the natural compatibility of Catholicism with the American mindset:

“…they [Catholics] constitute the most republican and the most democratic class of citizens which exists in the United States.”

But we shouldn’t be surprised. After all, though he was the lone Catholic signatory of the Declaration, Mr. Carroll was hardly alone. Charles Carroll’s signature was simply a continuation of the amazing story of Catholicism in America.

Long before the Revolution, Catholic missionaries had dedicated their lives and shed their blood for the conversion of this land. These intrepid pioneers went willingly into the unknown, into suffering, deprivation, torture, and death for the sake of the Faith. They often had entire populations and governments dead-set against them. The odds were nearly impossible. In human terms, it should all have failed miserably. But it didn’t. It’s a story that’s American to its core.

We hope you will join us this month in celebrating our country’s fascinating history and the glorious story of the Faith in this land. To learn more about the incredible Catholics who established the Faith in America, we recommend two books available at the Catholic Company: Pioneer Priests and Makeshift Altars: A History of Catholicism in the Thirteen Colonies and Fearless: Stories of the American Saints.

To learn more about the Catholics who participated in and led the Revolution, we recommend Liberty’s Lions: The Catholic Revolutionaries Who Established America. In this captivating book, you’ll meet not only Charles Carroll, but many other Catholics who played critical roles in America’s fight for independence, as well as hear what other founding fathers had to say about Catholicism. Happy 4th of July! 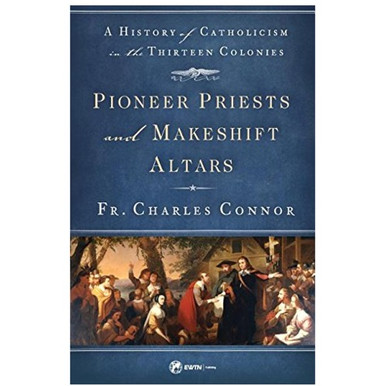 What are First Fridays and First Saturdays?