Discover one of Thérèse of Lisieux’s favorite saints…

St. Theophane Vénard was a humble and courageous missionary priest.

“I want to go to Tonkin, too! I want to be a martyr, too!” cried eight-year-old Jean-Theophane.

He had just read about a recent missionary martyr, a native of his own birthplace in Poitiers, France.

From that moment, Theophane Vénard never wavered in his youthful desire for priesthood and missionary work. When he was eighteen, he grieved his family by asking to enter the seminary for missionaries.

The missions in the East were the path to certain martyrdom. At that time, a priest lasted about five years. If an executioner didn’t kill him, disease would.

Mr. Vénard let his son go to seminary—but the two parted with the expectation of never seeing each other again.

Theophane persevered in his formation despite great discouragement, giving himself to Our Lady every day as he prayed the Rosary. After ordination, he was sent to Hong Kong, and from there to Tonkin (northern Vietnam) in 1854.

He arrived in Tonkin during the fierce persecution of Christians. For six years, he worked secretly, hiding by day in a tight space with two other missionaries. His flock loved their gentle French priest and called him “little Fr. Vén.”

Then, in the winter of 1859, he was arrested and imprisoned. He lay locked up in a tiny cage for months, where he wrote many letters to his family, speaking with joy of his coming death.

Finally, he was taken out of his cage and beheaded. Twenty-three years after reading about the Tonkin martyr, Theophane’s spontaneous childhood wish was fulfilled.

St. Thérèse loved St. Theophane Vénard because she herself had desired to be a missionary—though God’s plan for her “mission work” was contained within a monastery and eventually poured forth from heaven after her death. His letters home inspired her as she pursued her Little Way during her brief earthly life. You can come to know St. Theophane through his writings, too, in A Modern Martyr: St. Theophane Vénard. Learn about the sanctity hidden in the most ordinary things through the words of this young priest. Available today at The Catholic Company! 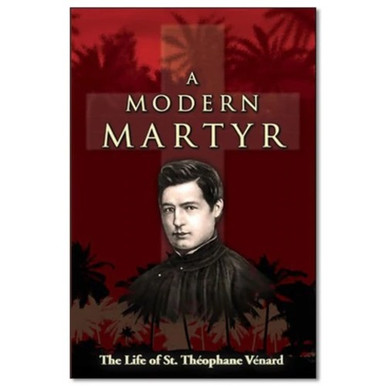 Christmas Around The Fire: Stories, Essays, and Poems For The Season Of Christ’s Birth