What do the symbols on the St. Benedict Medal mean?

Many Catholics proudly wear the St. Benedict Medal. It is a sacramental containing many symbols and prayers that can remind us to hold fast against temptation.

During his life, Benedict was known to work many miracles through the power of the Holy Cross. These included his heroic conquering of temptations and his miraculous vanquishing of attempts to kill him. By making the Sign of the Cross over a glass of wine that had been poisoned, for example, the glass shattered and he was spared from drinking it.

These miracles, and his devotion to Christ’s Cross, led to the creation of the St. Benedict Medal. It was a Jubilee medal first struck in 1880 by the Archabbey of Monte Cassino to commemorate the 14th centenary of St. Benedict’s birth.

On the front of the medal, St. Benedict can be seen holding a cross in his right hand and the Rule he wrote for his monks in his left.

To the right there is an image of the poisoned cup which he was once given.

On the other side of Benedict, a raven can be seen. This is because an enemy once sent him poisoned bread; God sent a raven to take the loaf and fly off with it, thereby protecting Benedict from harm.

The letters on the medal contain either whole phrases in Latin or the first letter of each word in these phrases. What do they mean in English?

Front of the Medal:

Back of the Medal:

On the cross in the center:

Circled letters at each corner of the cross:

Initials around the perimeter:

This is a medal that tells Satan to go back to hell where he belongs.

When we strive to lead virtuous lives, pray for the mercy of God, and seek the intercession of St. Benedict, this medal becomes a true weapon for the spiritual warrior. Let us make use of it as we fight against sin and evil. You can get yours right here at The Catholic Company! 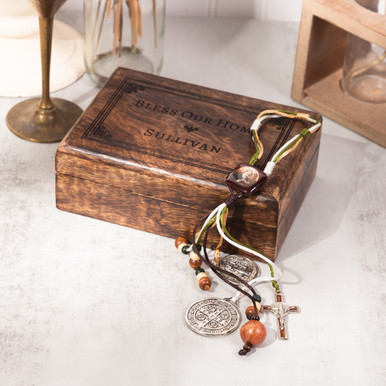 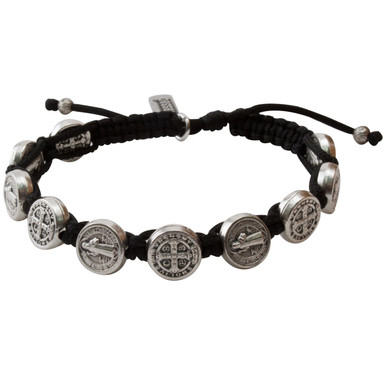