Who is the patron saint of the rejected?

The word “no” was a stranger to André Bessette’s vocabulary.

The superior of the Congregation of Holy Cross leaned back in his chair and stroked his chin. He looked across the desk at a candidate seeking entry into the Congregation—a sickly young man named Alfred.

Alfred had been refused entry once before; his application papers showed that he had bounced from job to job since he was twelve years old. He had never been able to keep any position for long, probably due to ill health. This was a poor recommendation for rigorous, steady monastic life.

Now, however, Alfred had returned—with a letter from the Archbishop of Montréal.

“…Accept young Alfred Bessette…” The archbishop’s words stood out on the paper.

The superior shook his head, sighed, and accepted the hopeful candidate.

Alfred—receiving the religious name Brother André—was to start out as the doorkeeper, with some extra duties: sacristan, laundry worker, messenger…

Forty years passed. Brother André was the doorkeeper still. Everyone who came to the door knew and loved him.

Thousands of visitors confided in Brother André. They asked for his prayers and advice. They asked for healing. André’s reply was always the same: “Go to Joseph!” André relied on St. Joseph’s protection and intercession in everything, and he was rarely refused.

St. Joseph is eager to help you, too. Whenever you have a petition, whenever you want the firm strength of a father, pray to Joseph. Lift your thoughts to him with the St. Joseph Heavenly Protector Statue, a beautifully-painted statue standing on a base with a little drawer. The drawer contains a lovely prayer to this powerful saint written on a mini scroll. Get yours today at The Catholic Company! 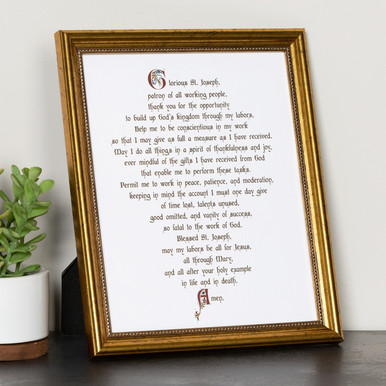