The first reference to for Our Lady as Untier of Knots is attributed to St. Irenaeus. In his ancient text Against Heresies he wrote, "the knot of Eve's disobedience was loosed by Mary's obedience. For what the virgin Eve had bound fast through unbelief, this did the virgin Mary set free through faith”. These figurative knots of disobedience and sin are undone by Mary in heaven. Mary is the co-redemptress and participates in Christ's’ redemptive action, allowing us to ask for her intercession.

For centuries, devotion to Mary under this title “Undoer of Knots” was localized to Germany. The devotion spread into South America aided by one of the Novena’s chief promoters Pope Francis. In the 1980’s, the then Fr. Jorge Bergoglio, was in Germany to finish his doctoral studies. He visited the church of St. Peter am Perlach and came across the original painting "Our Lady Untier of Knots" by Johann Melchoir Georg Schmittdner. He was struck by the painting and the devotion. He brought a copy of the painting and the devotion back with him to Argentina, and promoted it under this name. Through Fr. Bergoglio Argentine Catholics came to know about this German devotion.

Around this same time the Chernobyl Nuclear Power Plant disaster in Ukraine occurred, and as a result the devotion spread across Europe. Victims sought intercession from Mary and eventually the first chapel dedicated to ‘Mary Untier of Knots’ was built in Styria, Austria in 1989. The image of Mary Untier of Knots at the main altar of the chapel was created by painter Franz Weiss. It differed from the original, because the artist took as his theme the Chernobyl tragedy. 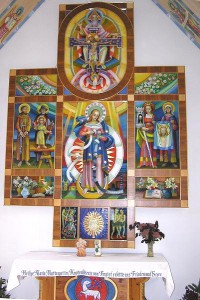 Currently there is not one solitary “official” church designated novena nor has one been given by divine revelation. Most Novenas under this title were composed by lay people in Brazil and Argentina and given to the whole Church in its ministry of healing. This Novena is traditionally used to seek Mary’s intercession and resolution in marital and family situations where there appears to be not clear solution.

Find a booklet with the history and prayers of Our Lady Undoer of Knots.