November is the month in our liturgical year when we remember our faithful departed. We celebrate All Saints and All Souls days, honoring those who have left us for their eternal inheritance and await our arrival. The readings at Mass turn our attention to the end of time, and we are invited to set our gaze and prepare our hearts as we ponder our own ends.

A Season for Reflection

The Church reserves the month of November for special reflection on death, but as Christians, it should be something upon which we reflect constantly. While worldly perspectives differ, we know death is merely our entrance into eternal life. It's a gift to Catholics to reflect on these "last things," at the end of our liturgical year and at Advent. We can only appreciate the reality of the Incarnation if we understand the reality of His death and Resurrection.

These are big things, and they deserve our attention. There are also smaller things most of us don't want to think about, pertaining to the details of our own deaths. These too are worth considering in this sacred season. 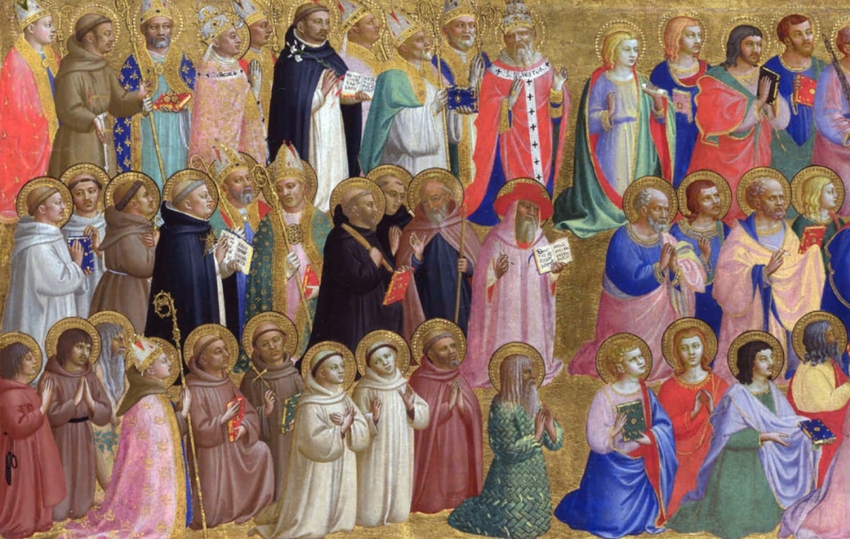 My father passed into eternity almost fifteen years ago. He was young when he died, only ten years older than I am now. He suffered a long illness with quiet strength and great trust in God. He loved God above all things, and his life reflected that in humility and charity. He had a sweet, gentle, and giving spirit.

When I would travel to see my parents and visit him in the hospital, he would send me to the gift shop to buy Juicy Fruit gum, so he could offer a stick to all of his young grandchildren as he liked to do at home.

One weekend while I visited, he began packing up all of his sweaters, telling me that there were people who needed them much more than he did, and he wanted to give them all away now. It was becoming colder in late fall, and I asked him if he wanted to save a few. He said only, "So many people need so much." I think he sensed that his earthly journey would soon be complete. Perhaps in his own, quiet way, he was also trying to help my mother with something he knew would be very difficult. He was always giving. 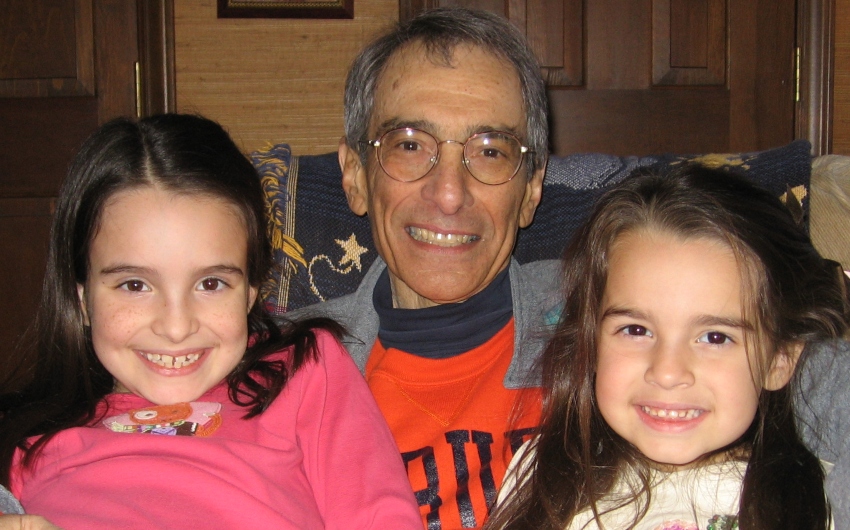 I am a self-professed Daddy's Girl, even in middle age, and I make no apologies for that. They say our fathers are our first models for the love of God, our Heavenly Father. In my case, I was privileged to have a father who was so tender and loving a model. He provided for his family in every way imaginable.

The last time he was hospitalized was very painful for us all. The anguish of leaving him there after his death - and him leaving us - even for his eternal home, was a pain for which there are no words. The loss of a parent is a very particular kind of suffering - the most profound suffering I have ever experienced.

The night he died, when we returned to my parents' home, I went upstairs to sit at his desk. I had emailed updates to a long list of friends and family members daily. I had called immediate family and a few of his close friends with the news. His sisters were already with us. His brother lived across the country, but was on the way. My mother, my aunts, and I were staying at my parents' home together.

I decided to email the news to those I had not called yet, and talk by phone to whomever called us in response. Having numerous conversations was just too much for any of us in the midst of the heartbreak and sorrow. We could hardly think about the details. Somehow they seemed both important and trivial, at the same time. 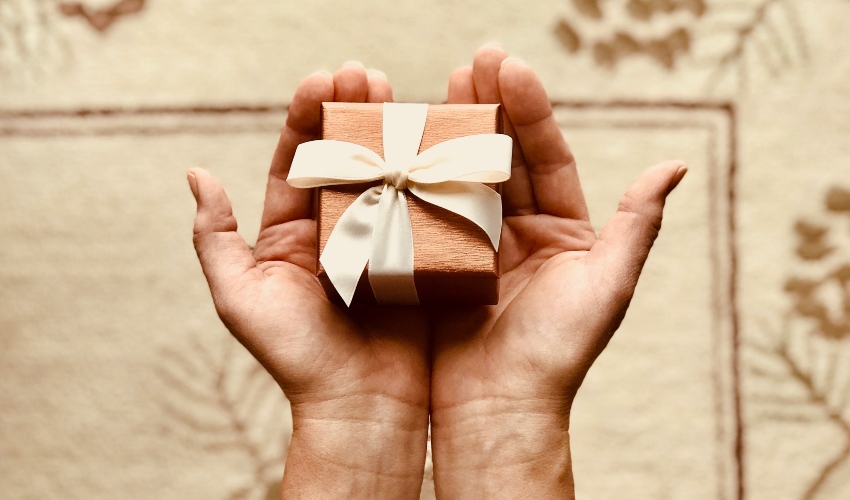 My dad's desk was always a special place. Even as a young girl, I was fascinated by his mechanical pencils, scientific calculator, well-ordered drawers, and the technical tools of an engineer. Now there were his Far Side calendar and pictures of his grandchildren, well wishes from his tennis pals, and inspiring sayings he had placed strategically in his space.

I liked to leave post-it-notes with messages there, because he left me scripture verses and notes in various places when I would come and go. A note from me, written years ago, was still stuck to his desk lamp, and so was a love note from my mother.

I had been using his computer for weeks, but I had not seen the manila folder in the center of the desk until that moment. It was not labeled, which was unusual for Daddy. A mechanical engineer, he was meticulous even in small matters. Something prompted me to open it, though I would not normally intrude upon his privacy like that.

Inside was a funeral planning sheet he had completed, down to the very last detail. He listed every song and reading, the Psalm, the Eucharistic Ministers, Lectors, the name of his dear friend who was the Sacristan, and all those whom he wished to participate in his funeral liturgy.

At the top of the sheet he had written in pencil,

"I would like the person who speaks at my Mass to proclaim the faith I believe, not proclaim me."

I was astounded. Even in death, he was still giving.

The Blessings of Pre-Planning

It might seem like a small thing to give your loved ones - the gift of pre-planning your own funeral Mass. Only those who have received it can grasp its full significance.

It is a concrete expression of love that I cannot overstate. It's relief in a time when your loved ones feel consumed by loss and heartache, barely able to meet the logistical demands required of them so quickly.

Flooded with emotions, I said a silent prayer and spoke to Daddy from his desk chair. "You are still taking care of us, even in this," I told him.

The next morning I was meeting with someone at my childhood parish to coordinate the funeral Mass. She had been our neighbor and family friend for many years. We were all moving through the difficulty of that day in a bereaved daze. I had not planned a thing, and thanks to my father, I never had to.

My mother was not aware of the folder. It surprised her as much as it did me. For the last few years of his life, Daddy was frequently ill and hospitalized, but he was never one to dwell on his own sufferings. He hung a quote on the refrigerator that read, "I am grateful for everything I have; I have no complaints about the way things are." He resolved never to speak about his illness, never to complain, and he suffered very privately.

Besides the Lord, my beloved mother was the only one in whom he confided those pains. I am sure there were many sufferings into which even she could not enter. They shared a lifetime of love, so between them passed many things that did not require words.

True to his giving spirit, Daddy had taken the funeral planning burden from us by leaving this folder front-and-center on his desk. He never said a word about it. I know it was because he trusted that the Holy Spirit would bring the right person to discover it at the right time. That was how my father lived his life, especially in his sickness. 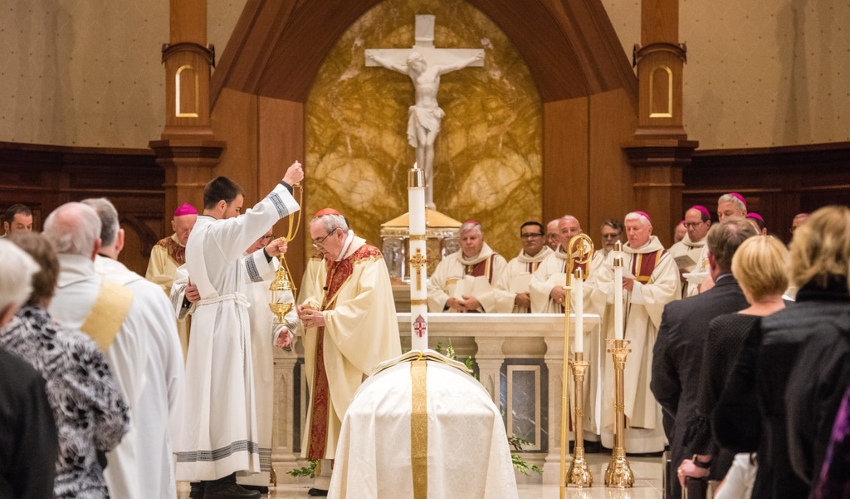 From the world's perspective, these aren't pleasant things to think about. They seem morbid and uncomfortable to many. After all, most of us don't have a Catholic perspective on the glory of the Resurrection and the true meaning of Christian death. Some people might even consider it "bad luck" to plan for something so disagreeable to our worldly sensibilities.

I can only speak for myself, since I received the gift of my father's pre-planning. Like him, it was sweet, gentle, and unforgettable. Long ago, when I found the manila folder on his tidy desk, I was a forty year-old wife and mother. I certainly wasn't thinking about my own death. Not enough, anyway. I see that now, as I have aged and matured in the truths of our Faith.

This final act of love from my father made such an impression on me that I went home and planned my own funeral mass.

I didn't have a special planning form like his. I just typed up it and printed it out.

I placed it inside a manila folder, unlabeled, in the top of my in-basket.

It's been there for 15 years now, just waiting.