On October 13, 1917, during the final apparition of Our Lady at Fatima (the day of the Miracle of the Sun), St. Joseph appeared to the three children of Fatima. He was holding the Child Jesus.  Much has been written about the significance of the Fatima apparitions, but not as much regarding the role of St. Joseph in the apparitions.  What can we learn from the apparition?

The last apparition was the most powerful because it was then, around noon, that the sun appeared to leave its normal place in the heavens and whirl in a crazy and erratic manner and then head toward earth in front of 70,000 onlookers, causing terror in those watching. One columnist who was present reported that,

“Before the astonished eyes of the crowd the sun trembled and danced. Suddenly it seemed to fall until it almost reached the earth, but then it stopped, slowly making its way back into the sky."

The order of the apparition was as follows according to Sister Lucy's (one of the three children) own words:

" . . . Then opening her hands, she (Our Lady) made them reflect on the sun, and as she ascended, the reflection of her light continued to be projected on the sun itself . . . After Our Lady had disappeared into the immense distance of the firmament, we beheld St. Joseph with the Child Jesus and Our Lady robed in white with a blue mantle, beside the sun. St. Joseph and the Child Jesus appeared to bless the world, for they traced the Sign of the Cross with their hands. When a little later, this apparition disappeared I saw Our Lord and Our Lady . . . Our Lord appeared to bless the world in the same manner as St. Joseph had done."

THE ROLE OF ST. JOSEPH IN THE HUMAN FAMILY

Monsignor Joseph A. Cirrincione, in his booklet St. Joseph, Fatima, and Fatherhood, has explained that he believes the scenes of Fatima foreshadow the "consequences for the world which are sure to be felt if the true fatherhood of God and the strong role of the father of the family are rejected by mankind. Having the advantage of hindsight, I declare that such consequences have already come to pass."

St. Paul said in Ephesians 3:14-15, "I bow my knees to the Father of Our Lord Jesus Christ of whom all paternity in Heaven and earth is named." The fatherhood of St. Joseph, as with all human fathers, is a reflection in a creature of the fatherhood of God the Father. 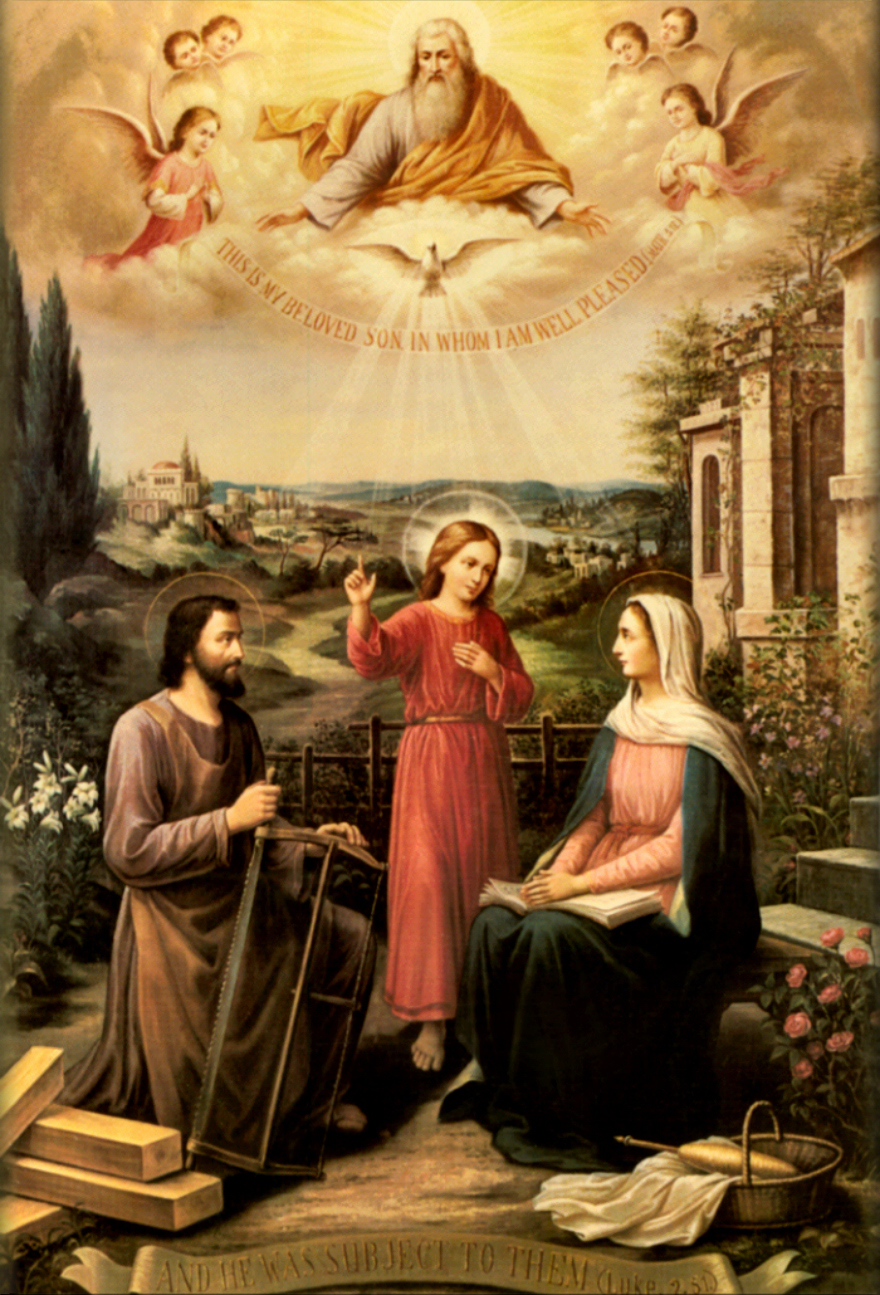 Yet in the course of human history, the image of the family suffered change in the mind of man because of sin and because of the conscious effort of man to change it.  It wasn't until the Incarnation, when the Son of God became a member of a truly holy human family, that the family once again reflected God in action as well as being. And this is who the three children of Fatima saw, a reflection of the Trinity.

If we look back at the role of St. Joseph in the Holy Family, we see that he is called by God to be the head of the family. St. Matthew recounts how an angel sent from God explains to St. Joseph in a dream that he is to be the earthly father of Jesus: "She shall bring forth a son and thou shalt call his name Jesus. For he shall save his people from their sins" (Matt. 1:21). By Jewish law, after marriage, whatever belonged to the wife, belonged to the husband. Since Jesus Mary's son, therefore He was also the son of Joseph.

When the life of the Child was in danger after the visit of the Magi, God again sent an angel with a message, "Arise, and take the child and his mother, and fly into Egypt; and be there until I shall tell thee" (Matt. 2:13). And then again, when the danger was over, another angel came as a messenger to St. Joseph saying, "Arise, and take the child and his mother, and go into the land of Israel." Finally, when he was thinking of settling with the mother and the Christ Child in Bethlehem, Joseph was warned in a dream that this would be dangerous, and so he went back and settled in Nazareth. Thus we see that it was St. Joseph to whom God the Father gave instructions for the Holy Family.

Just as God united Mary to Himself in a unique and intimate manner through her conception of the Child Jesus by the power of the Holy Spirit, "so He willed to unite St. Joseph to Himself in a unique and intimate manner in the exercise of His fatherhood of Jesus" (Msgr. Joseph Cirrincione).  St. Joseph, as the head of the family, shared God's authority, as does every human father.  The source of the authority comes from the "office," not the "person." Yet because of that role, St. Joseph was burdened with responsibilities and duties that came along with his fatherhood.  This is the same for all fathers. No father is perfect.  St. Joseph was as close to that as a human being could be.

THE MESSAGE OF ST. JOSEPH AT FATIMA

How does all of this relate to Fatima and to the role of fatherhood today? When the children and all of the 70,000 onlookers saw the sun move about in a wild fashion and begin to descend toward earth, they were terrified. Many believed it was the end of the world.  This is understandable, since the one thing that we can always count on being there is the sun in the sky, and it was observed to be moving wildly about, apart from the laws of nature. 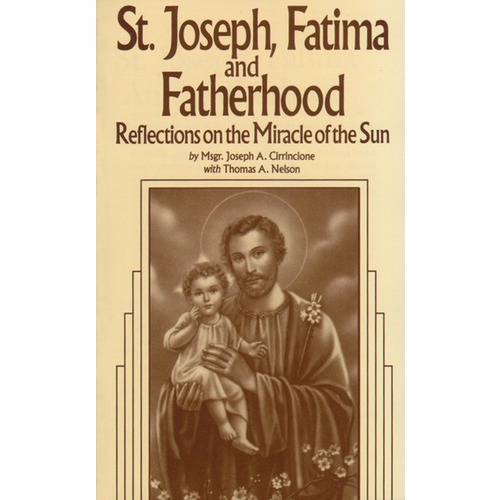 According to some who have studied the apparitions at Fatima, the vision of the Holy Family—with the peaceful St. Joseph and the Child Jesus—seems to contrast with the events of the "Miracle of the Sun," in which the sun whirled about out of control in the sky just moments later. According to Msgr. Joseph Cirrincione,

" . . . the future event which both scenes foreshadow, has to do with fatherhood . . . St. Joseph was holding the Child Jesus and both were blessing the world, while Our Lady of the Rosary looked on. I see in that peaceful scene a reminder of what we pray in the Litany of St. Joseph, 'Head of the Holy Family, Pray for us.' And in the convulsions of the sun, I see an ominous foreshadowing of the consequences for the world which are sure to be felt if the true fatherhood of the family are rejected by mankind."

Fatima has been called the  'Hope of the World" because it was there that God's unprecedented intervention in human affairs took place. For some, the "Miracle of the Sun" represents not so much a threat of evils to come as a foreshadowing of the dethronement of God the Father and the appalling consequences that would follow.

It is apparent, now more than ever, that fatherhood has been diminished and that many see it as old-fashioned or unnecessary.  Even the role of the priests as fathers is challenged in society today.  Yet there is no denying that the role of fathers is crucial to family life and to life in the Church.

Can we still have hope?

"The vision of St. Joseph and the Infant Jesus blessing the world, with Mary by the side of the sun which has not left its place, is God's assurance that though men may reject Him, God will never reject man" (Msgr. Joseph Cirrincione).

Regardless of whether one believes in Fatima or not, there is one part that is not debatable, and that is the "Miracle of the Sun." It is a historic event. By applying that knowledge with our faith in God we can continue to pray in the way that Our Lady requested, especially for families and for fathers and mothers.

Yes, we still believe that Fatima is indeed, the Hope of the World!

Read next: How to Live the Message of Our Lady of Fatima

Do you want to learn more about the apparitions of Our Lady at Fatima, in honor of the 100th anniversary? If so, sign up for our new 30-day content series unpacking the complete Fatima story at GoodCatholic.com. 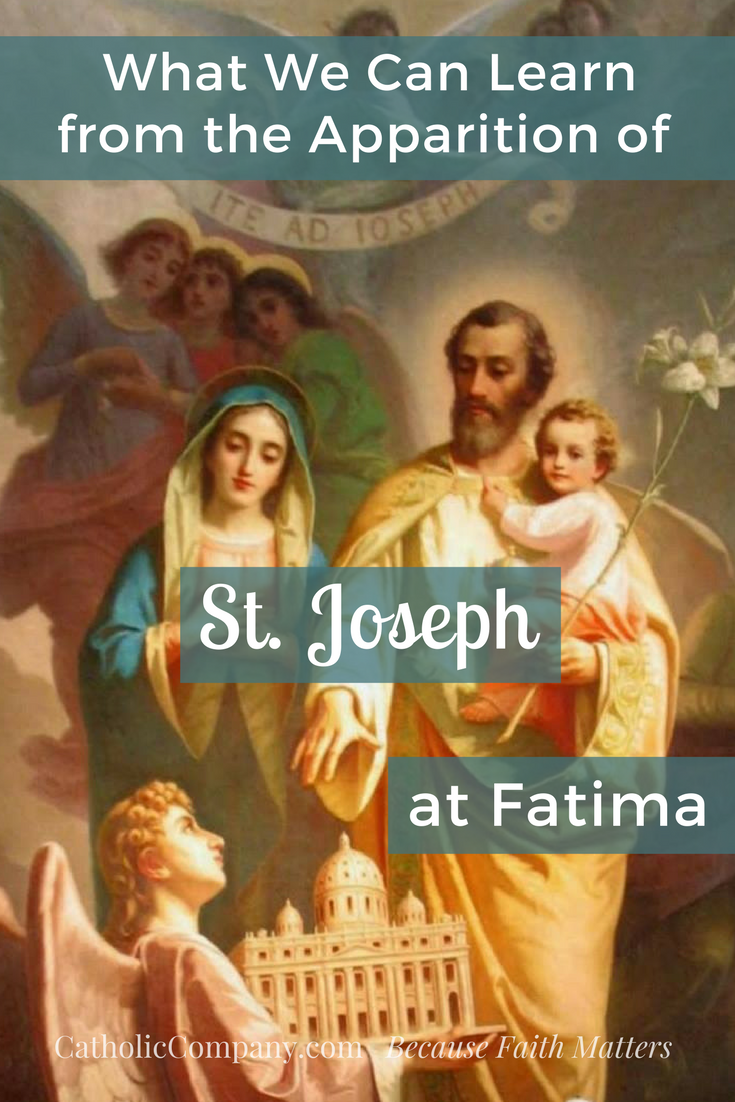