Recently, I found myself at the funeral of a man I did not know. He had lived a long life and died in his mid-eighties. I gathered, from the kind words the priest spoke about him, that he was a good man with a family who loved him and would miss him.

I was there because my twelve-year-old son was an altar boy serving, and so, instead of dropping him off and running a few errands as I usually do when John serves a funeral Mass, I decided to stay with my two younger children and attend the funeral.

We sat in the back. It wasn't a particularly sad funeral. In fact, it was rather joyful. While there, I realized how profound it is to attend a funeral Mass. Even when it is someone I don't know.

Here is what the United States Conference of Catholic Bishops says about attending a funeral:

Funerals give us the opportunity to grieve and show others support during difficult times. Through our prayers and actions during these times we show our respect for life, which is always a gift from God, and comfort to those who mourn.

Sitting in that church, following along and participating in the Mass, I was struck by the fact that although he was a stranger, I am tied to this man as a member of the Body of Christ. Therefore it is my duty as a Christian to pray for him, just as I hope that someone else would pray for me.

I realized what a testimony a funeral is to our faith as Catholics. It is a "coming full circle."

The funeral liturgy is an act of worship, and not merely an expression of grief. The Catechism of the Catholic Church explains that the pall that is placed over the casket, and holy water is sprinkled over it, to remind us of our baptism, when we began our life in Christ.

We attend a funeral to honor the deceased, and especially to pray for their souls. What a poignant and appropriate thing to do for a fellow brother or sister in Christ.

At the death of a Christian, whose life of faith was begun in the waters of Baptism and strengthened at the Eucharistic table, the Church intercedes on behalf of the deceased because of its confident belief that death is not the end, nor does it break the bonds forged in life. The Church also ministers to the sorrowing and consoles them in the funeral rites with the comforting Word of God and the Sacrament of the Eucharist.

(Order of Christian Funerals, No. 4)

There are a number of powerful prayers that are said at a Catholic funeral Mass. Here are just a few:

O God, the life of the living, the hope of the dying, the salvation of all that trust in thee, mercifully grant that the souls of thy servants and handmaids, delivered from the darkness of our mortality, may rejoice with thy saints in perpetual light. Through our Lord.

Absolve, we beseech Thee, O Lord, the soul of Thy servant (N.), that he (she) who is dead to the world, may live unto Thee, and wipe away by Thy most merciful forgiveness what sins he (she) may have committed in life through human frailty. Though our Lord Jesus Christ. Amen.

May his (her) soul (their souls) and the souls of all the faithful departed through the mercy of God rest in peace. 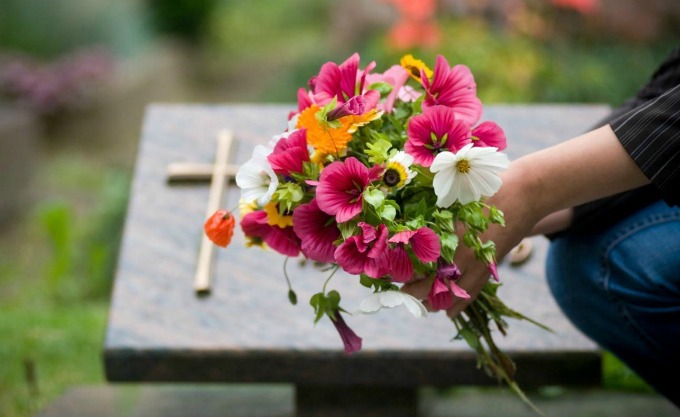 I am a convert to Catholicism. As I left the pew and filed out of the church with the family and friends of the man who had died, I was profoundly grateful for my Catholic faith. Although a stranger, I felt that this man had touched me somehow. It was an odd feeling but a good feeling. I was happy to have participated in a Mass that honored him.

To pray for one who has died and to attend a funeral is not only a spiritual act of mercy, it is a privilege. I hope I won't hesitate again to attend someone's funeral simply because I don't know them.

Often funeral services are announced from the pulpit at Sunday Mass. Have you gone to the funeral of a stranger? I would love to know how it impacted you!