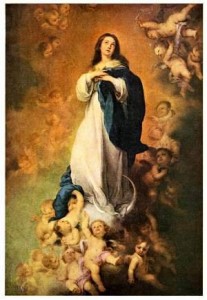 This Blog is the second of a three part series. Although you do not have to read every blog in the series in order for them to be intelligible individually. However, if you would like to read the prior blog in the series, "Basic Mariology - Part 1: The Immaculate Conception", Click Here.

Mary, the Mother of God, is by far one of the most controversial figures in the Bible, in my opinion.  Many Christians bicker over whether she was a virgin throughout life, sinless, and assumed into heaven.  On the question of the Assumption of Mary, Christians are very divided.  Only the Roman Catholic Church, Eastern Orthodoxy, Oriental Orthodoxy, and some Anglican churches believe in the Assumption of Mary.

In this blog I am going to try to explain what Roman Catholics believe about the Assumption of Mary and why they believe what they do.  DISCLAIMER: I am by no means a Mariologist.  I am pulling from a large pull of data and will list my sources at the end of the blog.

What do Roman Catholics believe about the Assumption of Mary?

The dogma on the Assumption of Mary was pronounced in 1950 by Pope Pius XII via papal infallibility.  And this is what he had to say:

“. . . we pronounce, declare, and define it to be a divinely revealed dogma: that the Immaculate Mother of God, the ever Virgin Mary, having completed the course of her earthly life, was assumed body and soul into heavenly glory.” - Munificentissimus Deus

Despite the clarity of this statement, there are still some questions.  For example, was Mary assumed before or after her physical death?  There is no official Church teaching on this matter, as the prior passage shows.  Most hold that Mary was more than likely assumed after she died due to the tomb of Mary widely held to be in Jerusalem (there is a supposed tomb of Mary in Ephesus, but many question its authenticity).

Why would Mary be assumed into heaven? Munificentissimus Deus has this to say:

“ . . . finally obtained, as the supreme culmination of her privileges, that she should be preserved free from the corruption of the tomb and that, like her own Son, having overcome death, she might be taken up body and soul to the glory of heaven where, as Queen, she sits in splendor at the right hand of her Son, the immortal King of Ages.”

There you have it.  She was assumed to serve at the right hand of the Son as Queen of heaven.  The idea of Mary as the Queen of heaven has a biblical foundation in Revelation 12:1: “A great sign appeared in the sky, a woman clothed with the sun, with the moon under her feet, and on her head a crown of twelve stars.”

Why do Roman Catholics believe in the Assumption of Mary?

The obvious answer is because God revealed it as truth to us and it is a dogma of the Church.  But why do Catholics believe it to be a truth revealed by God?  For primarily two reasons:  The testimony of the early Church and negative evidence.

Negative Evidence means the lack of evidence which prove that the event in question did not occur.  How does this apply to the Assumption?  If Mary had not been assumed into heaven, then her body would be on earth, or would have decomposed on earth.  Early Christians went through great efforts to preserve the bodies of deceased saints, such as St. Paul, St. Peter, etc.  Mary, the greatest of Christ’s disciples, would have certainly had her body preserved upon death.  And yet there are no records of her bones or of anyone every caring for or preserving her bones.

2) Testimony of the Early Church